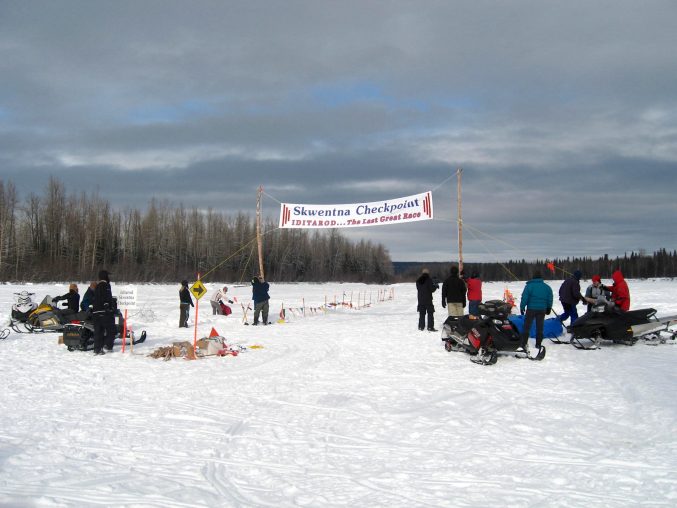 The distance from Yentna Station to the second checkpoint, Skwentna is 30 miles.  These are easy miles for the mushers and dog teams as the trail follows the Yentna River until joining the Skwentna River a couple of miles short of the checkpoint.  Most mushers find the trail easy to follow but a few take wrong turns along the many channels and sloughs.  Handler has told me about mushers coming into Skwentna saying it took twice as long as it should have to get there because of following a wrong trail.  I’ll bet they paid close attention to the official markers after that! 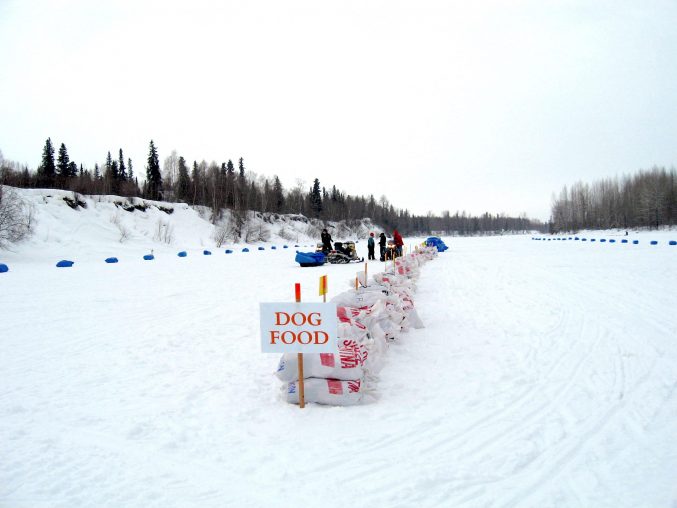 The first teams usually arrive in Skwentna around 2100 (9:00 pm).  Sometimes there are multiple teams lined up under the banner waiting to check in.  The traffic is dense and intense.  The mushers are focused and the dogs are excited to be on the trail.  The excitement at Skwentna checkpoint is short lived.  Within 15 hours of the first musher arriving, the final musher has departed for Finger Lake.  The volunteers who have worked all night take a short nap and then are back at work dismantling the checkpoint. 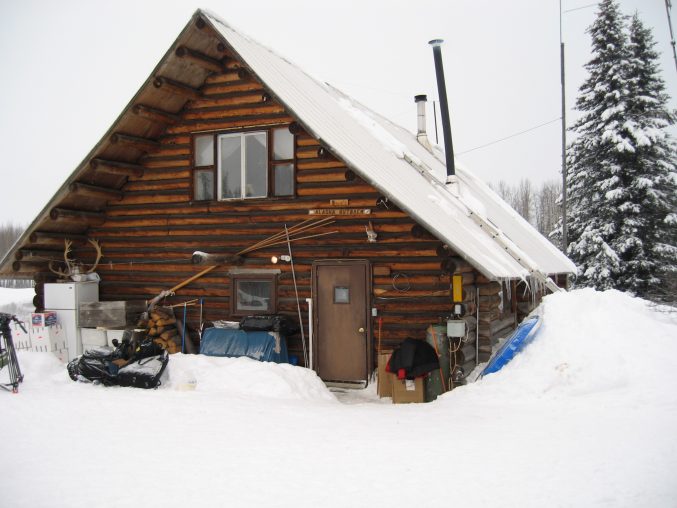 Skwentna checkpoint is located on the Skwentna River at the Post Office and the homestead of Joe and Norma Delia.  Both Joe and Norma have passed away but they have a long rich history with the race.  Joe became the postmaster in Skwentna in 1950 and served in that capacity for sixty some years.  Skwentna has a population of 37 in the winter with more people living in seasonal cabins during the summer.  The school closed long ago so the kids who live there are home schooled.  Folks come to the post office by snowmachine, plane or dog team in the winter and boat in the summer.

Average rainfall per year is 27 inches and average snowfall is 118 inches.   In January, the temperatures range from 30° below to 33° above and in July the thermometer can dip to the lower 40’s then soar to the mid 80’s. 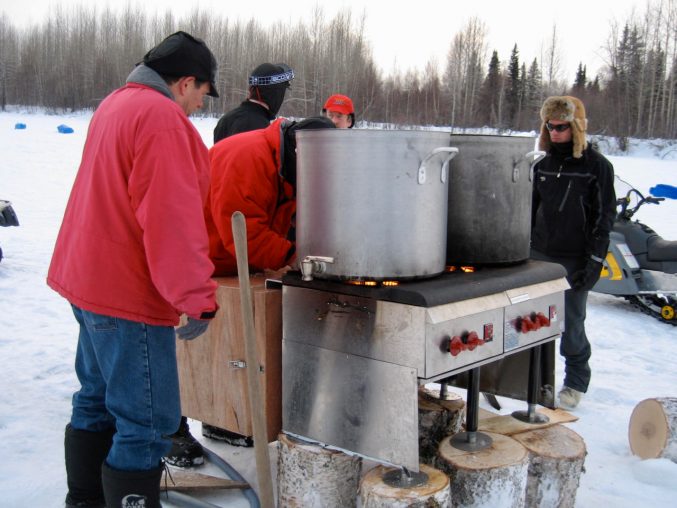 You can’t believe how exciting and noisy it is to have all the Iditarod teams come through a checkpoint in just 12 hours.  As the race goes further down the trail, it spreads out but in the early checkpoints like Yentna Station, Skwentna, Finger Lake and Rainy Pass, all the teams are still pretty close together.  My handler actually worked at Skwentna as a communications volunteer and says the best part is to see all the awesome dogs, telling them all “GOOD DOG” and petting as many as possible. 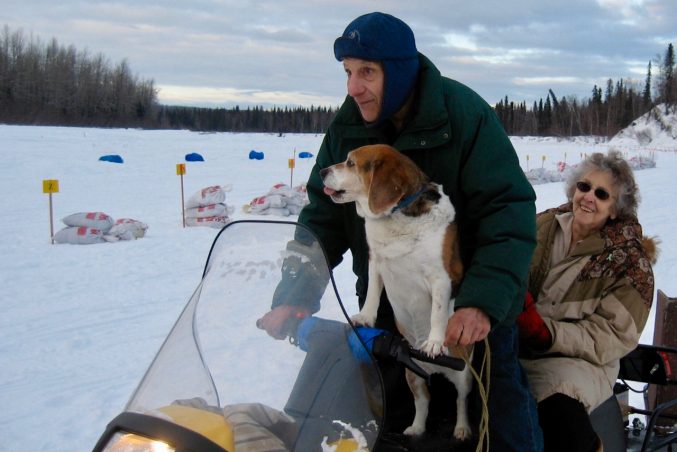 Joe and Norma Delia with Mac inspect the checkpoint before teams arrive.

Joe Delia has lent many a helping hand in relocating the trail on the east side of the Alaska Range.  Joe Redington turned to Delia to open a trail to Rainy Pass.  The teams currently, as they did then, travel portions of Delia’s former trap line.  The checkpoint has been on the river below the Skwentna Post Office and Joe’s Outback cabin since the first running of Iditarod.  After hosting the checkpoint for 25 years, the Joe and Norma handed over the responsibilities to younger legs and stronger backs. 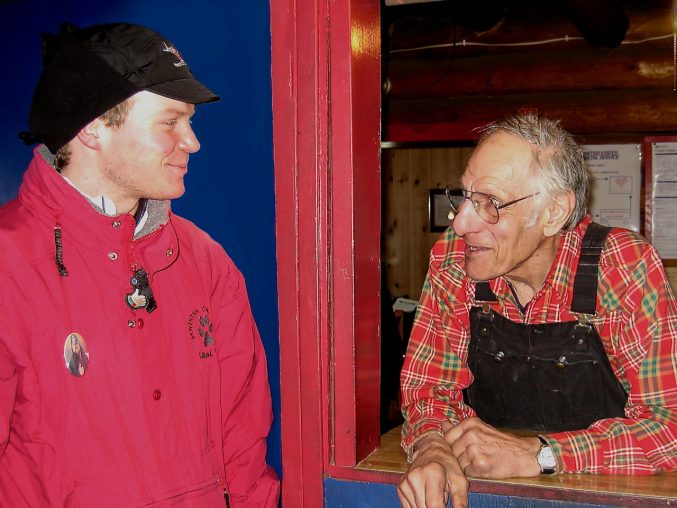 There are 40 to 50 people who come together to make things happen at Skwentna.  The River Crew comes in from Tacoma, Washington.  They lay out straw bales, sort food, heat water, park teams and act as checkers.  The Skwentna Sweeties come from Eagle River, Alaska.  They provide hospitality by cooking great meals for all the workers and the mushers.  There are five or six veterinarians, a race judge, a race marshal and a handful of communications people.  When you work a checkpoint, everyone has a very important role.  It’s just like the dogs and mushers going down the trail – everyone has to work as a team.  Do you know the true meaning of TEAM?  Together Everyone Achieves More. 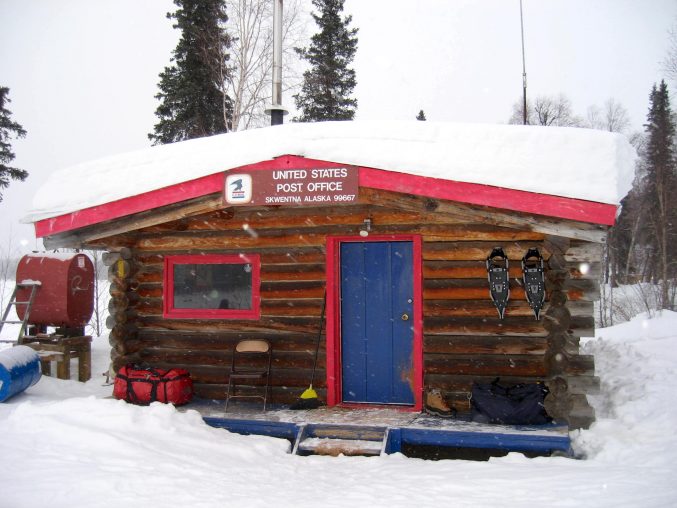 Well, there you have it – a little information about Skwentna, the folks who established the checkpoint and the volunteers that come together to make things happen.  Next Handler will tell us about Finger Lake – that’s the third checkpoint.  Stay tuned for that story and remember, in everything do your best every day and have a plan.