Virtual Trail Journey – The Trail from Rohn to Nikolai 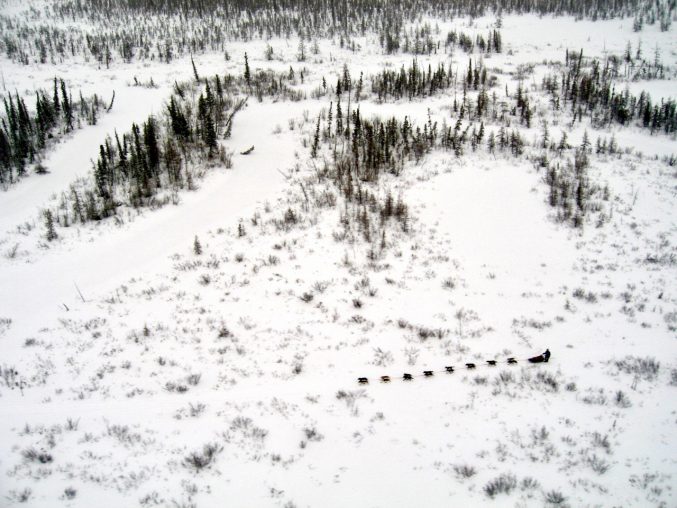 The unmistakable silhouette of a sled dog team from the air.

The trail between Rohn and Nikolai is unique and challenging.  During the clear, cold daytime the mushers can see Denali and Mt. Foraker.  Try to imagine how beautiful these peaks are around sunrise and sunset when they are brightly lit by the sun over the dark landscape below or when they are rosy pink with alpenglow.

On the other hand, challenges include areas of glare ice, overflow, wind and lack of snow.  Handler explained that overflow is water that sits on top of frozen ice.  How does it get there?  It comes up through cracks in the ice or around the edges as the weight of the ice pushes down on the water below.

For the first twenty miles out of Rohn, mushers face the challenge of ice on the Post River and the Post River Glacier.  The sloping ice is slippery.  Crashes happen and more than one musher has come to Nikolai sporting bruises. The Farewell Burn segment of 35 miles offers other challenges including rough trail, tussocks and lack of snow.  The final 20 miles of the run to Nikolai is more level but wind and overflow can still be issues. 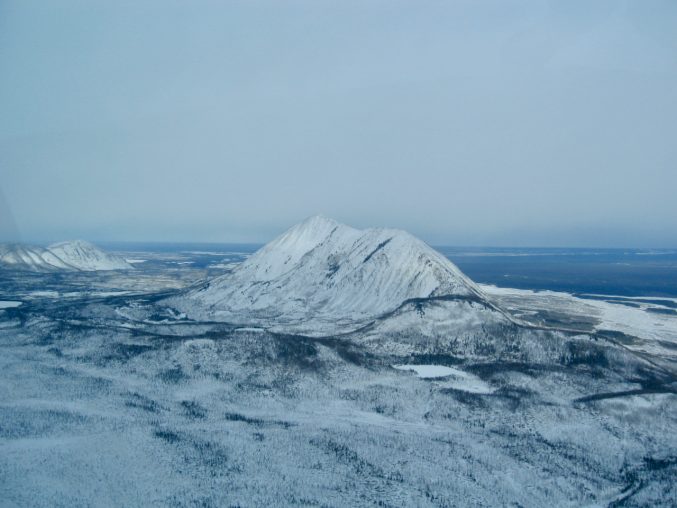 Egypt Mountain is a stand-alone peak that’s about 3,000 feet tall.  It looks like a pyramid.  The teams run by the mountain as they head from Rohn toward Farewell Lake.  This is where the buffalo live.  Buffalo?  I thought handler was making this up!  Back around 1965, thirty-eight of the big brown beasts were relocated to the Farewell Burn area.  Now there are more than 300 bison in the area.  They aren’t a problem for Iditarod teams but they are curious.  There are stories about mushers who decided to pull over to rest and nap and wake up with a curious buffalo sniffing around.  Now who would believe this but Don Bowers, Jr. speaks the truth in his Trail Notes! 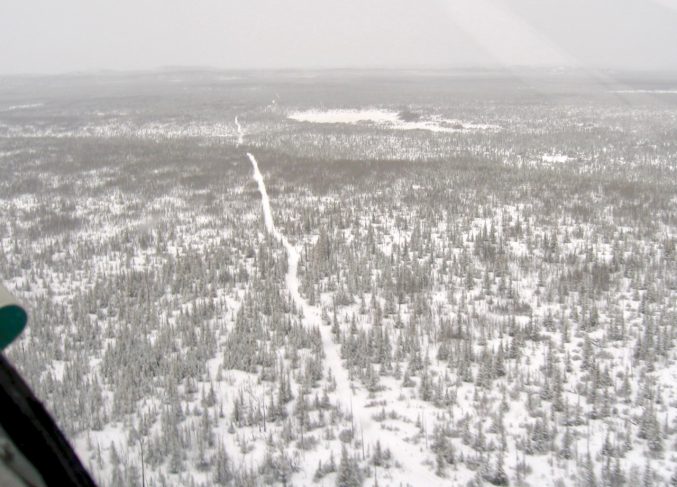 The trail across the Farewell Burn goes on and on and on.

The Farewell Burn is exactly what its name implies.  During the summer of 1978, one and a half million acres burned in Alaska’s largest ever forest fire.  Forty miles of Iditarod Trail runs through the burned area.  After the fire, the trail was covered with snags and downed trees, so for several years it was very tough sledding.  But over time, Mother Nature and the Bureau of Land Management have improved the trail.  The good news is with trees growing up, the trail is somewhat protected from the wind and rather than being blown bare, snow – if there is any – stays put.

In the Burn, about 40 miles from Nikolai, the teams will come upon a tent camp complete with people and snowmachines.  This is the Buffalo Camp.  Teams are welcome to stop to rest and have some stew.  The hunters sure helped Paul Gebhardt out in 2006 when he lost his team.  Paul told Handler his story while they were eating cheeseburgers and fries at the Nikolai Community Center. 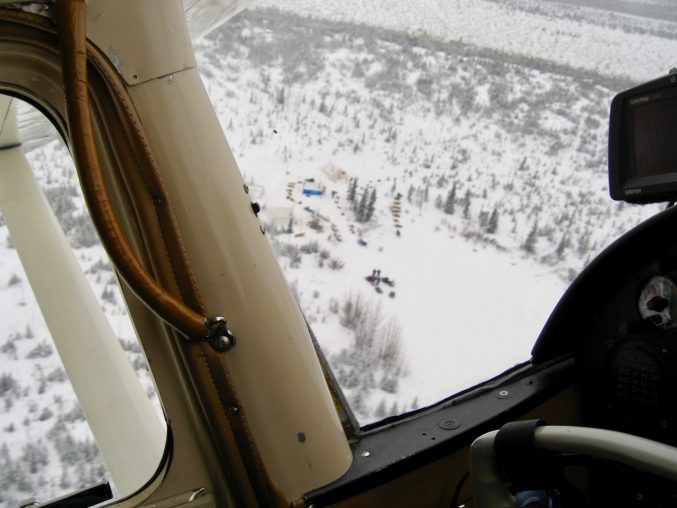 Aerial view of the buffalo camp.

Gebhardt was coming into the burn when his sled hit a tree and the gangline snapped.  The team kept going leaving Paul standing on the runners of a motionless sled.  Paul called WHOA many times hoping his leaders would stop the team.  But having so much fun, the team didn’t stop.  He began to run after the team.  Doug Swingley, not too far behind, came upon the abandoned sled with no gangline.  He saw Paul’s footprints going down the trail.  He knew what had happened.  Pretty soon Doug caught up with Paul and gave him a ride to the Buffalo Camp.  Paul borrowed a snowmachine from the hunters and finally caught up with his team a few miles down the trail.  Gebhardt tied his team off and then with the snowmachine, raced back to his sled.  He towed his sled up to the Buffalo Camp, picked up a hunter then went on up the trail to where his team was tied off.  The hunter returned to camp with the snowmachine.  Paul replaced his gangline and continued down the trail, now in second place behind Doug Swingley.

I’ve heard about the rule that mushers can’t receive outside assistance on the trial.  Do you think Paul was penalized for riding on Doug’s sled or using a snowmachine to recover his team?  The rules allow a musher to use any means available to recover a team.  The Race Marshall said that Gebhardt didn’t gain any time or advantage in using these options to recover his team so there was no penalty.  Lucky for Paul that the Buffalo Camp was so close and lucky that mushers are really Good Samaritans and willing to help each other out.