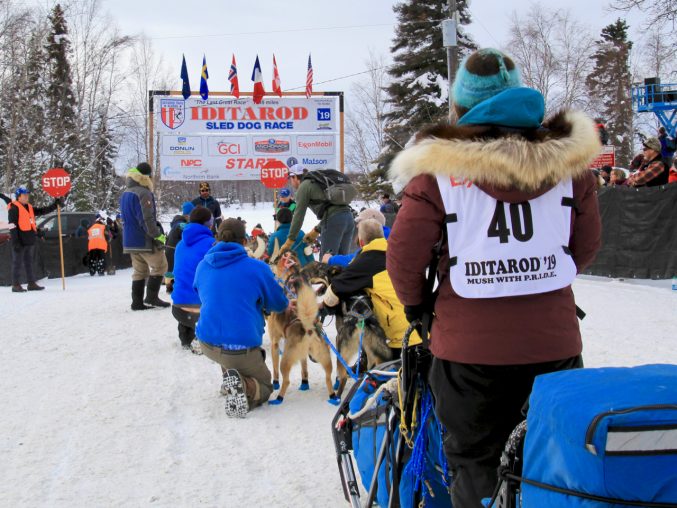 Restart?  How can a race have two starts?  This is more than I can wrap my young dog brain around!  It’s true though; Iditarod has TWO starts – the CEREMONIAL START in Anchorage and then on the following day the RESTART in Willow. Some folks refer to it as the REAL START.  Once the teams leave Willow, it’s pretty difficult for spectators to see the race because the trail becomes very remote.  So the numbers of people watching and cheering as the teams go by drops from thousands at the start and restart down to a much smaller number in the checkpoints along the trail. 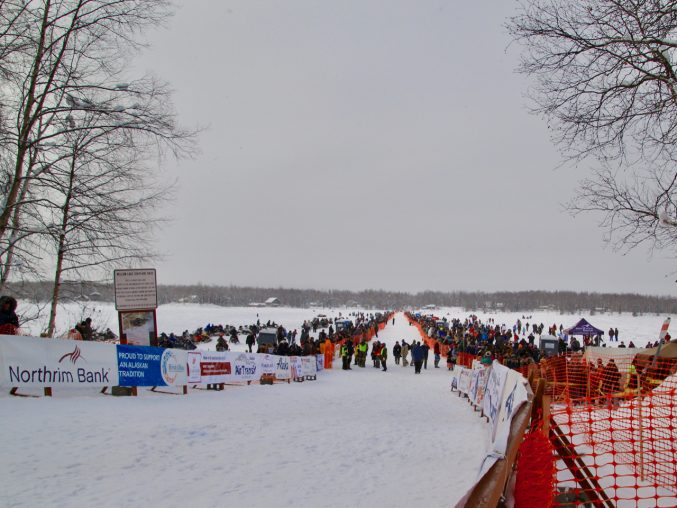 You might wonder why the Restart isn’t in Wasilla, the location of Iditarod Headquarters.  That’s a good question!  With all the urban development, new roads, driveways and traffic – it’s just not reasonable for the dogs to run out of Wasilla and with climate changes, Wasilla doesn’t always have enough snow for a safe trail.  By going 30 miles further north to hold the Restart at Willow, the teams head out across frozen Willow Lake into the wilderness on a trail covered with plenty of snow.

Willow is a community of 1600 people located at mile 69 of the Parks Highway that leads to Denali.  This is the last road access to the trail.  Summer high temperatures in Willow range between 70 and 90°F. Winter temperatures range from 30 below to 30° above.  Unlike some areas on the trail, Willow isn’t known for windy weather. 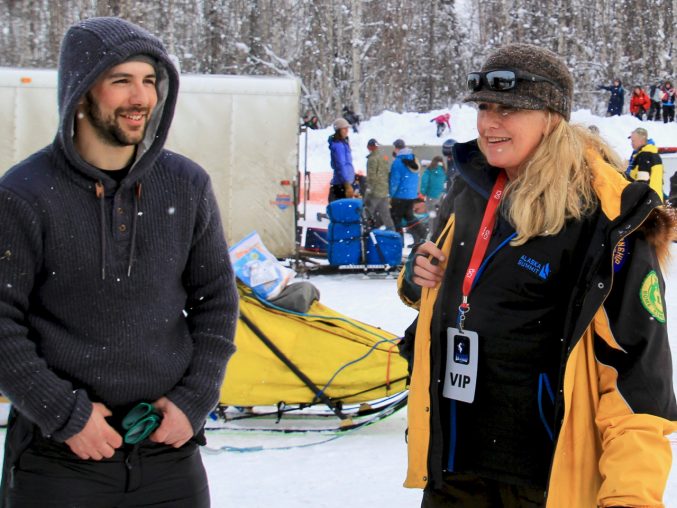 Enough about the details, here’s what Handler told us about the Restart.  While the Ceremonial Start was pretty relaxed and a lot of fun, the Restart is a different story.  The mushers are very focused and pretty business like.  They all arrive with their dog trucks and trailers and park in designated spots at the Willow Community Center located next to Willow Lake.  There are hundreds of volunteers including dog handlers, thousands of spectators and plenty of reporters and film crews. 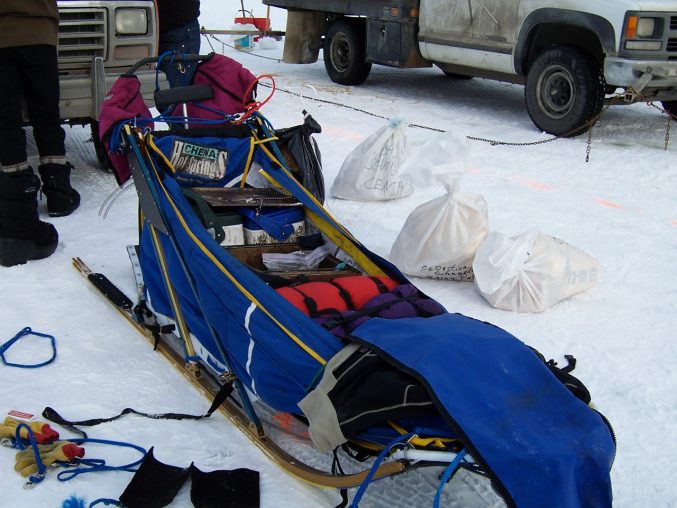 Packing the Sled Before the Restart in Willow

The mushers make last minute checks of their gear, sleds and gang lines.  Some are even making last minute repairs and decisions as to which dogs will make the Iditarod team.  Once the gang line is stretched out and the sled bag is packed, there’s time to answer reporter’s questions, give instructions to volunteer handlers, chat with other mushers, have a bite to eat, enjoy the beautiful view of Denali (if the mountain is out) or maybe take a little nap.  The dogs are “dropped” (that’s musher speak for getting out of the dog trailer to go to the bathroom) then they get a nice pre-race meal and hop back into their boxes for a little nap.  There is so much going on at the restart, getting back into the trailer helps to keep them relaxed and calm. 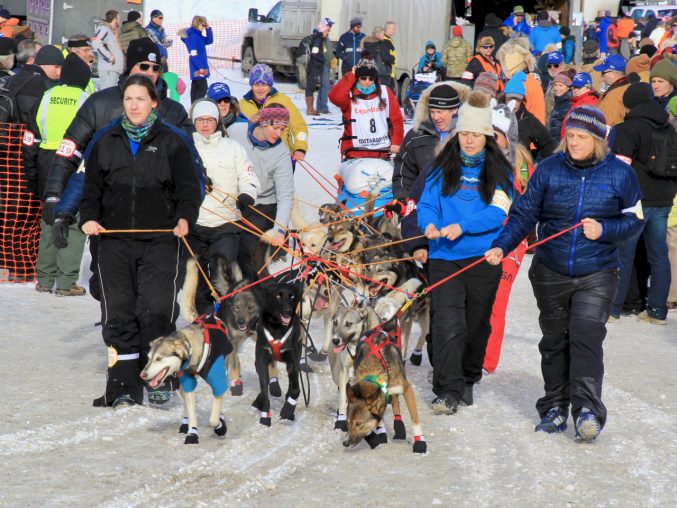 Soon enough, two o’clock or 1400 rolls around and the action kicks into high gear!  Mushers are keeping an eye on the time to get the team in harness soon enough but not too soon as the dogs will get too excited.  Teams go off at two-minute intervals so to keep things rolling smoothly, about 20 minutes before a musher’s start time, the clerk of course comes by to tell the musher to get ready.  A short time later, the team is on the way to the starting line lead by 16 or so very strong handlers. 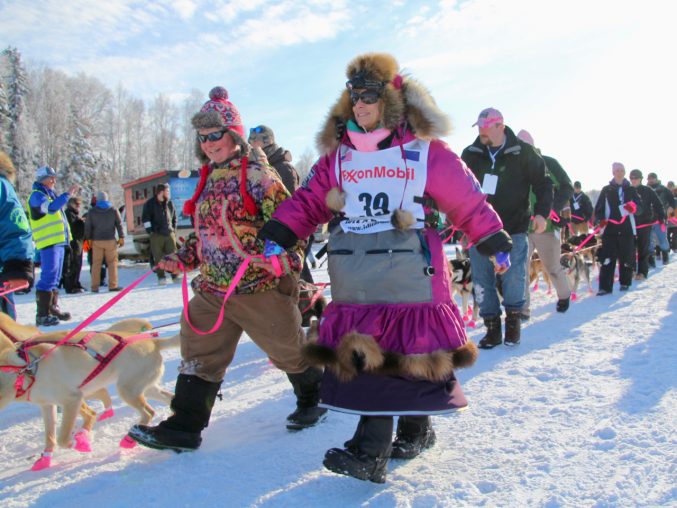 Handler told us this story about DeeDee Jonrowe.  DeeDee was team 28.  Team 27 was being taken to the start.  DeeDee was just sitting around talking with folks, didn’t even have her anorak on.  It sure seemed like she didn’t realize she was next.  Time passed and the clerk called her to the start – still NO DOGS IN SIGHT.  When DeeDee stood up 14 handlers suddenly appeared from out of nowhere with a harness in hand.  They each went to the trailer, brought out a dog, harnessed, hooked the dog onto the gang line and bootied it.  DeeDee, now in her anorak, stepped onto the sled runners behind 14 cool, calm and collected dogs, pulled the snow hook and was on her way to the starting line.  Honest – this all took less than a minute!  Veteran mushers like DeeDee have their routine perfected.

Well, there you have it – a little information about the Restart of Iditarod and Willow, the community that hosts the event.  Next, Handler is going to tell us about the checkpoints along the trail – stay tuned for those stories and remember – in everything do your best every day.