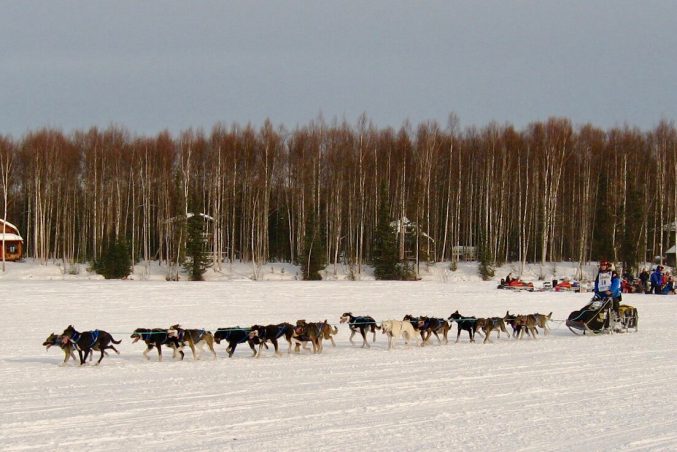 The run from Willow to Yentna is flat, fast and easy.

The distance from the Willow restart to the first checkpoint, Yentna Station, is 42 miles.  These are easy miles for the mushers and dog teams as most are on frozen river ice or well traveled snowmachine trails.  Most of the traffic at Yentna station goes straight on through, stopping just long enough to check in and pick up supplies.  More about the race and strategy later, first I want to tell you what I learned about Yentna Station.

Officially, this checkpoint is known as the Yentna Station Roadhouse.  How strange is that?  The nearest road is more than 40 miles away!  The only way to travel to Yentna in the winter is by plane, snowmachine or dog team.  In summer boat takes over as the major means of getting to the roadhouse as it’s located on the Yentna River. 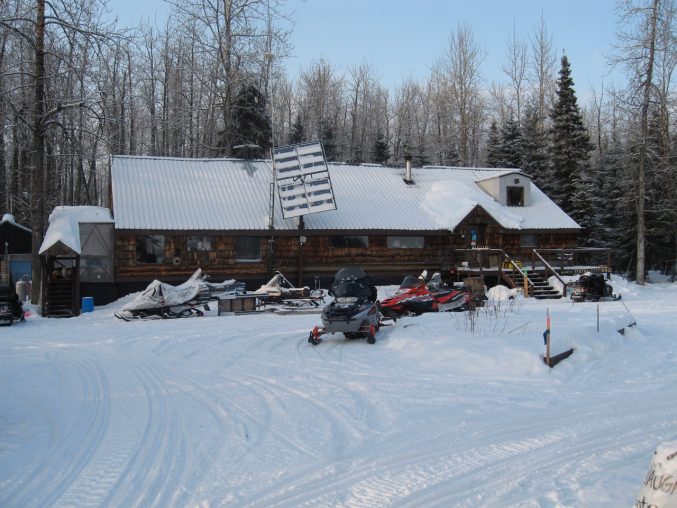 Yentna Station Roadhouse, located on the Yentna River, is the first Iditarod Checkpoint.

Roadhouses are quite significant in Alaskan history.  They are like hotels that were built along trails used by miners, mail carriers, loggers and anyone else who had to travel along wilderness routes.  They were generally built a “day’s travel” apart.  Some were permanent wood structures while others were just temporary tents.  Some were quite nice while others just provided shelter and a meal.  It seems to me roadhouse should really be called trailhouse.

The Yentna Station Roadhouse is an adventure lodge run by the Gabryszak family.  The roadhouse or lodge is a large permanent log structure.  The Gabryszaks offer guide services, meals, rooms and cabins to folks who want to fish, hunt, watch Iditarod or travel through the area. 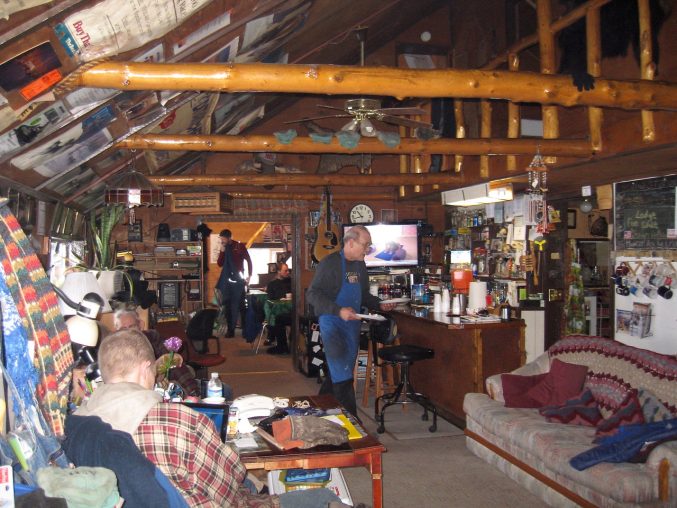 Dan Gabryszak waits on customers in the Roadhouse dining area.

Yentna Station is not only the first checkpoint for Iditarod, it’s also the halfway checkpoint for Junior Iditarod.  Iditasport, Alaska Ultra Sport and the Iron Dog Race use Yentna as a stop over too. Iditasport and Ultra Sport are both human powered races where people bike, ski or snowshoe anywhere from 130 to 1100 miles.  The Iron Dog is a snowmachine race of a couple thousand miles.  You can do what I did, Google these races and see what they are all about.  By the way, in the lower 48 snowmachines are known as snowmobiles.

Each year, the Gabryszaks expect around 15 inches of rain and 60 inches of snow and it can get as cold as minus 45° in the winter and as hot as 90° in the summer. Handler saw skiers and bikers along the Iditarod Trail when it was 35° BELOW zero.  That’s only a little chilly for sled dogs but it’s REALLY cold for humans.

Yentna Receiver 36 inches of snow on top of 130 previous inches.

In one of the snowiest years Yentna has ever seen, 130 inches of snow had fallen prior to the Jr. Iditarod.  As the Jr. mushers arrived at Yentna Station late on Saturday afternoon, they brought more snow with them – LOTS of snow.  Nearly 10 inches fell during the required 10-hour layover.  Snowmachiners broke trail for the Jr. Iditarod mushers back to Willow while it continued to snow.  Finally after 44 hours of heavy snow, the clouds broke up and the sun came out.  Snowfall total for that storm was 36 inches.  All of the checkpoint volunteers for the Jr. Iditarod had an extended stay at Yentna Station until noon on Tuesday when the Iditarod Air Force planes could land on the snow packed river runway. 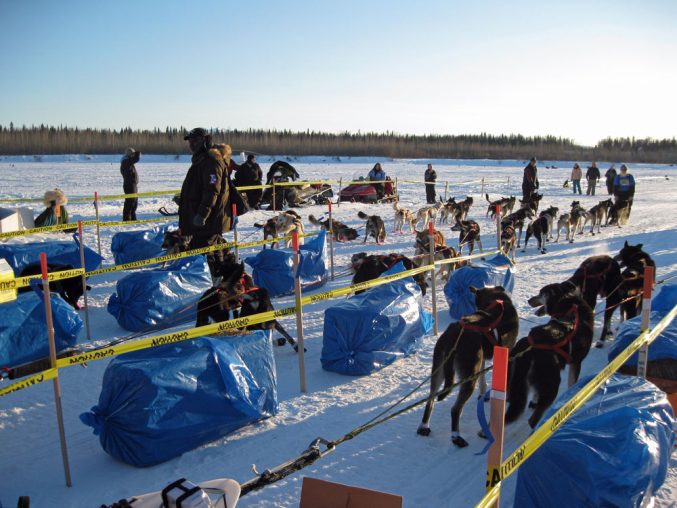 Mushers use five lanes to check in at Yentna Station.

Here’s a bit about strategy along this part of the trail.  Some mushers check in at Yentna, and then run right on through to Skwentna, another 34 miles, to take their first rest.  Other mushers pick up supplies at Yentna and camp/rest before getting to Skwentna. Those teams check in, pick up more supplies and blow right on through Skwentna.  There is so much concentrated action at the early checkpoints that mushers often plan to camp outside the checkpoints for some peace and quiet.  It’s all in the trail strategy that the musher puts together before the race. I’ve heard a lot about how important planning is.  Here’s a little saying – if you fail to plan, you plan to fail.  Yikes – I hope everyone has a plan!

Well, there you have it – a little information about Yentna Station, roadhouses in general, the trail and Iditarod strategy.  Next Handler is going to tell us about Skwentna.  That’s the checkpoint she works at – stay tuned for that story and remember, in everything do your best every day and have a plan.