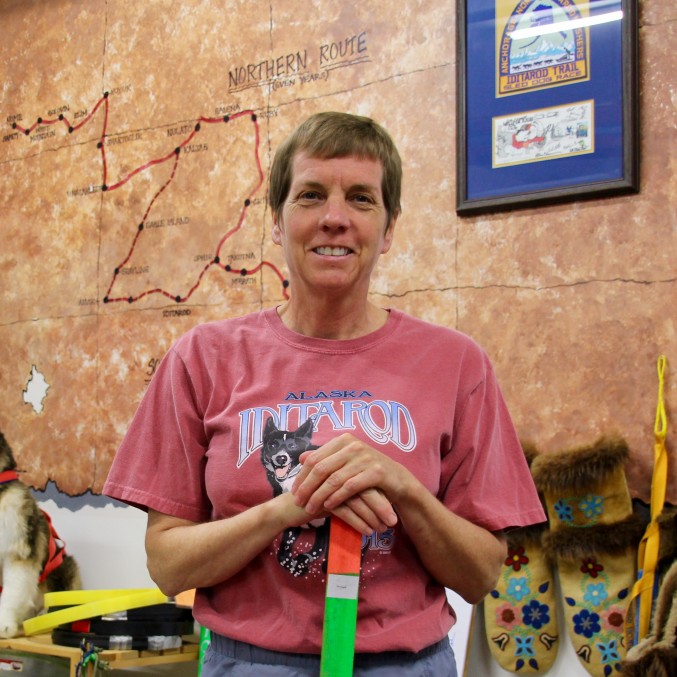 Cindy Abbott, Iditarod’s 2015 Red Lantern Recipient, spoke to the teachers about her experiences on the trail.  Abbott also shared basic race information to give the teacher’s a better understanding of the Iditarod as they use the Last Great Race as a theme for education in their classrooms.  Abbott is the only woman to have summited Mt. Everest and complete Iditarod.  Abbott was an Iditarod rookie for three years before earning the coveted Iditarod Finisher’s Buckle.  In 2013 Abbott was forced to scratch at Kaltag with an injury that turned out to be a broken pelvis.  She returned in 2014 only to injure her shoulder in the icy Dalzell Gorge and scratch in Rohn.  Cindy returned in 2015 hoping that the third time would be a charm.  Indeed it was.  Abbott finished the race aas the Nome Finisher’s Banquet concluded.  Banquet attendees made their way to Front Street and the Burled Arch to welcome Abbott and celebrate her perseverance.

Watch for more Telephoto Stories this week. The teachers are staying at Vern Halter’s Dream a Dream Dog Farm and Musher Training Center connecting with like-minded colleagues who use Iditarod as a theme for education in classrooms around the world. The educators will depart summer camp after the Volunteer Picnic and musher signup with a sled load of ideas for teaching language arts, math, science, social studies, geography, health, music, art, engineering, technology, and character.