The Last Great Race on Earth®

You can’t compare it to any other competitive event in the world! A race covering  1000 miles of the roughest, most beautiful terrain Mother Nature has to offer. She throws jagged mountain ranges, frozen river, dense forest, desolate tundra and miles of windswept coast at the mushers and their dog teams. Add to that temperatures far below zero, winds that can cause a complete loss of visibility, the hazards of overflow, long hours of darkness and treacherous climbs and side hills, and you have the Iditarod. A race extraordinaire, a race only possible in Alaska.

From Anchorage, in south central Alaska, to Nome on the western Bering Sea coast.

It has been called the Last Great Race on Earth and it has won worldwide acclaim and interest.  American film crews as well as film crews from around the world have covered the event. Journalists from outdoor magazines, adventure magazines, newspapers and wire services flock to Anchorage and Nome to record the excitement. It’s not just a sled dog race, it’s a race in which unique men and women compete. Mushers enter from all walks of life. Fishermen, lawyers, doctors, miners, artists, natives, Canadians, Swiss, French, and others. Men and women each with their own story, each with their own reasons for going the distance. Hundreds  of volunteers, men and women, students, and village residents all help to organize and stage the event. They man headquarters at Wasilla, Anchorage, and Nome.  They fly volunteers, veterinarians, dog food, and supplies. They act as checkers, coordinators, and family supporters of each musher. 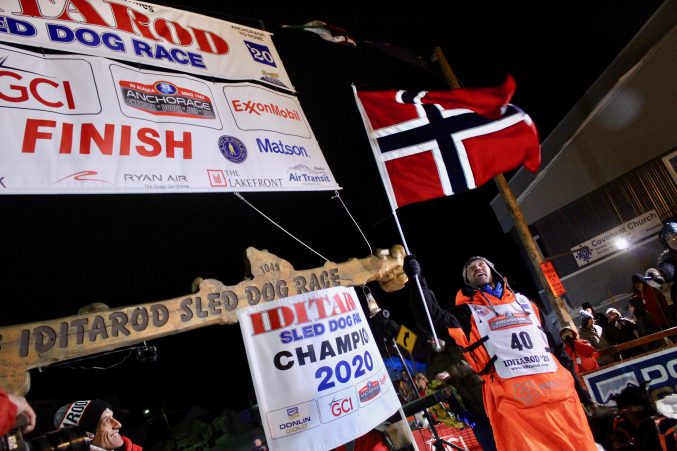 The Spirit of Alaska! More Than a Race

The race pits man and animal against nature, against wild Alaska at her best and as each mile is covered, it is a tribute to Alaska’s history and the role the sled dog’s played. The Iditarod is a tie to that colorful past.

The Iditarod Trail, now a National Historic Trail, had its beginnings as a mail and supply route from the coastal towns of Seward and Knik to the interior mining camps at Flat, Ophir, Ruby and beyond to the west coast communities of Unalakleet, Elim, Golovin, White Mountain, and Nome. Mail and supplies went in. Gold came out. All via dog sled. Heroes were made, legends were born. In 1925, part of the Iditarod Trail became a life saving highway for epidemic-stricken Nome. Diphtheria threatened and serum had to be brought in; again by intrepid dog mushers and their faithful hard-driving dogs. Throughout the years, the sled dogs were important to day to day life in the villages and throughout Alaska. All of these examples and more are a part of Alaska’s history.

Redington had two reasons for organizing the long-distance Iditarod Race: to save the sled dog culture and Alaskan huskies, which were being phased out of existence due to the introduction of snowmobiles in Alaska; and to preserve the historical Iditarod Trail between Seward and Nome. These reasons were his life’s work.

The Iditarod Trail Sled Dog Race has over time grown and helped to accomplish the goals that Joe Redington Sr. lived. 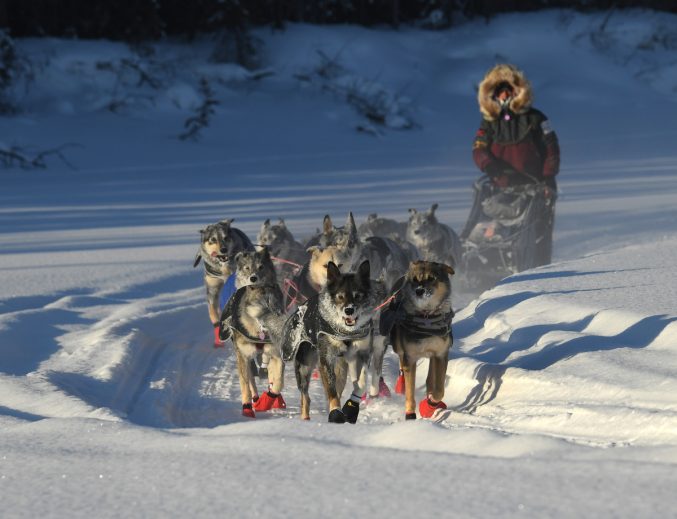 Iditarod musher Richie Diehl is the first musher into the Iditarod checkpoint in Nikolai, AK on Tuesday, March 10, 2020. (Photo by Bob Hallinen)

On the Iditarod Trail

Anchorage is the starting line. From there, the field of dog teams run 11 miles. After a restart in the Matanuska Valley, the mushers leave the land of highways and bustling activity and head out to the Yentna Station Roadhouse, Skwentna and then up through Finger Lake, Rainy Pass, over the Alaska Range and down the other side to the Kuskokwim River — into the interior and on to the mighty Yukon — a river highway that takes the teams west through the arctic tundra.

The race route is alternated every other year, one year going north through Cripple, Ruby and Galena, the next year south through Iditarod, Shageluk, and Anvik.

Finally, they’re on the coast — Unalakleet, Shaktoolik, Koyuk, Elim, Golovin, White Mountain and into Nome where a hero’s welcome is the custom for musher number 1 or 61!

The route encompasses large metropolitan areas and small native villages. It causes a yearly spurt of activity, increased airplane traffic and excitement to areas otherwise quiet and dormant during the long Alaskan winter. Everyone gets involved, from very young school children to the old timers who relive the colorful Alaskan past they’ve known as they watch each musher and his team. The race is an educational opportunity and an economic stimulus to these small Alaskan outposts. 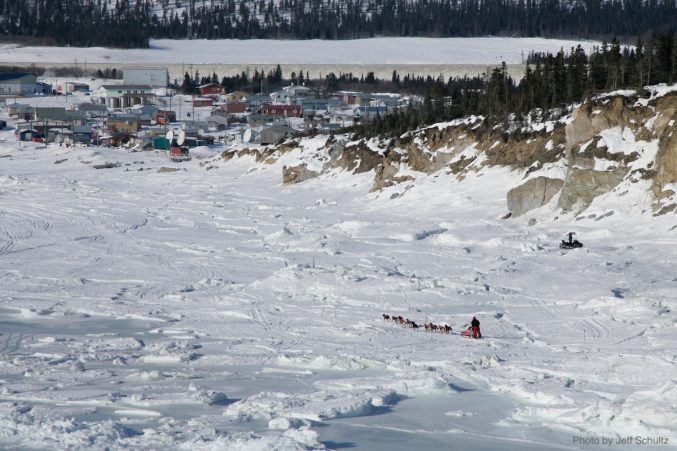 It takes so much more than a field of willing mushers and anxious sled dogs to run the Iditarod Trail Race. With an annual budget of almost two million dollars, the Iditarod Trail Committee depends on a hard working force of volunteers and supporters to raise the necessary money all year around. An annual sweepstakes is held. Various items are sold at fairs and benefits. Banquets are planned in both Anchorage and Nome. This volunteer force and the loyal supporters from both the private and business sector make the race possible each year.

Information headquarters are set up in Anchorage, Fairbanks, Nome, and Wasilla during the race to disseminate information and race standings to the public. Volunteers man each of the 20+ checkpoints, some of whom spend their vacations on the trail. A complex communications net is set up that covers the course offering logistical support, emergency communications and an information source for race officials. The Iditarod Air Force is a fleet of small privately owned bush planes flown by volunteers, shuttling dog food and mushers’ supplies to each checkpoint, moving veterinarians and race officials up and down the trail and hauling tired dropped dogs back to the major pick up points. A group of veterinarians from all over the United States, and sometimes even from Europe, take time out from their busy practices to assist with dog care duties along the trail. Trail breakers on snow machines proceed the field of mushers, cutting trail, marking trail, and packing trail in windswept areas, trying to give each team a safe path to follow.

Without these volunteers, there wouldn’t be a race. Their efforts save the committee thousands of dollars which would be impossible to raise. Their dedication and involvement is what this truly Alaskan event is all about.

An IditaRider auction is held each year where fans can bid to be a rider in a mushers’ sled from the start line for the first 11 miles. This auction opens on December 1 and closes at a specific time and date in January each year. The money raised is used to offset expenses of the race and to provide each musher who finishes the race after the top 20 (who receive cash prize winnings), with $1,049. This helps the mushers get their teams home. 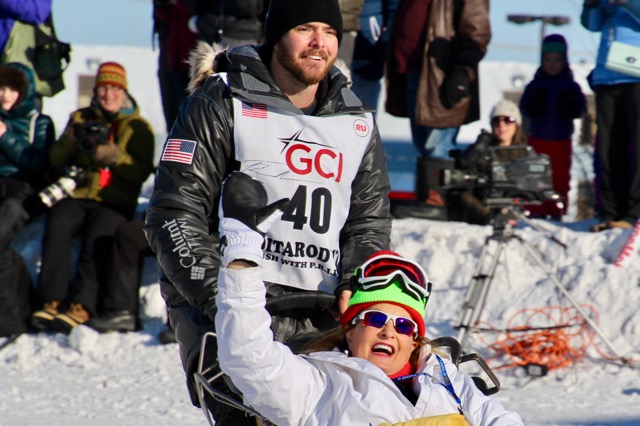 Thomas Rosenbloom and a Happy Iditarider in Anchorage