Dan Green who carried the precious package of life saving serum from Tolovana to Manley Hot Springs handed it off to the next relay driver, Johnny Folger.  Johnny, an Athabasan Native did his leg of the relay at night.  Reports say he made good time on his 31 mile run to Fish Lake.  That distance would be considered and excellent day’s run. 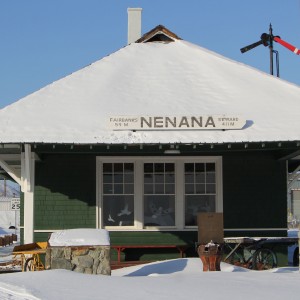 Folgers met up with Sam Joseph at the Fish Lake cabin.  Joseph was a 35 years old Tanana tribe native.  His team was mad up of 7 malamutes.  He covered the 26 mile distance to Tanana in two hours and 45 minutes.  His average speed was better than nine miles an hour.  Sources say the temperature was minus 38 degrees when he reached the exchange at Tanana.

On January 29th, Athabascan Native, Titus Nikolai, carried the anti-toxin 34 miles between Tanana and Kallads.  Historical records say very little about Nikolai’s run or his team.  It’s safe to assume the temperature was about the same, minus 38 degrees, as was recorded when Sam Joseph reached Tanana.  Nothing is mentioned about the wind chill.

Dan Corning carried the serum 24 miles to Nine Mile Cabin.  He averaged 8 miles an hour on his journey to meet Edgar Kalland.

Kalland and dogs were vary familiar with the route as he was a musher for the U.S. Mail Service.  Edgar carried the medicine 30 miles to Kikrines before handing it off to Harry Pitka.

Pitka with a team of seven dogs, made his run at night covering the distance of 30 miles at an average speed of greater than nine miles an hour.  The trail to Ruby was in good condition.

From GPS tracker, there are 5 mushers within a short distance of Ruby – Mitch Seavey, Dallas Seavey, Aaron Burmeister, Martin Buser and Aliy Zirkle.  They are within 7 miles of each other.  Of that group, Martin Buser is in the driver’s seat.  He’s taken his 8 hour rest on the Yukon, the others have not.

It’s way to early to tell what the race really looks like.  Things won’t come into focus until everyone has taken the required 24 hour rest.  Many mushers have mentioned taking the 24 at Galena.  We’ll see how all that works out with the required 8 hour break on the Yukon.