Eye on the Trail: Final Trio for Thursday in Nome

Iditarod spectators really weren’t hearing things or seeing double this afternoon. The siren sounded twice announcing the arrival of Anna Berington and Kristy Berington. There were two squad cars waiting down near Subway and the movie theater to escort the twins to the Burled Arch. Then there were two teams heading down the left side of Front Street toward the Burled Arch. Nobody told the sled dogs they should use the center of the street where a track of snow has been laid down for them. Oh well… 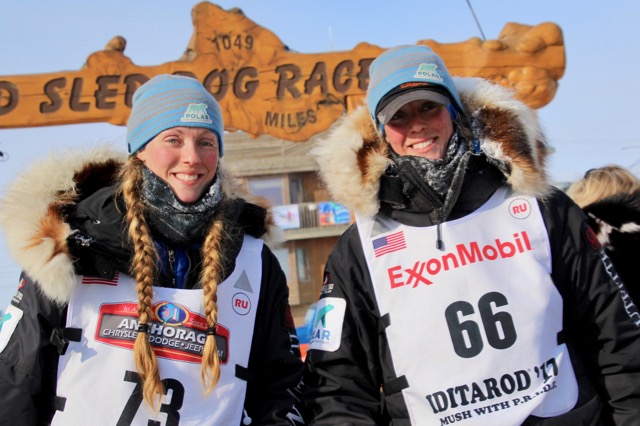 Kristin and Anna Berington at the Burled Arch

Anna and Kristy Berington have shared common interests for a lifetime. Together they operate Seeing Double Sled Dog Racing. They say that being able to raise and train dogs together has been a dream come true, and racing the Iditarod is a perfect fit for their love of endurance racing.  Dog mushing is the perfect sport to combine adventure and endurance racing when the twins are not training for their own endurance events. During the mushing “off” season, Anna and Kristi compete in half marathons, ultra distance races and triathlons. Kristi says, “:Anna and I are always in friendly competition. I’m really proud of her in her mushing and athletic career. To be a part of it all with her is amazing.” The twins do carpentry work and the fish commercially.

Leading the pair to the finish line this afternoon was Kristi. This is the eighth straight Iditarod Kristi has finished. Her highest place has been 29th. Today she finished in 40th position with a time of 10 days, 2 hours and 29 minutes. The time is a personal best by nine hours. Kristi has also raced in the Yukon Quest.

Anna followed her twin to the finish today with a time of 10 days, 2 hours and 30 minutes. Standing under the Burled Arch today represent Anna’s 6 straight Iditarod finish. While she finished 41st today, her highest finish was 28th. Like Kristi, Anna recorded a personal best time in Iditarod by about 9 hours. 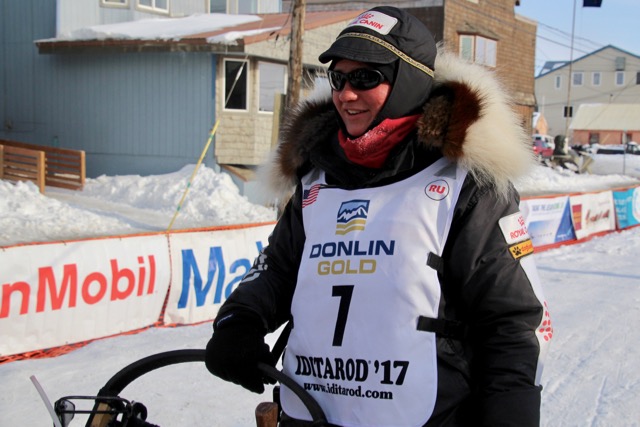 The last musher to stand under the Burled Arch for Thursday was Laura Neese. Laura came in whistling and grinning from ear to ear behind a team of healthy happy dogs. After setting her snow hook, she pointed to Air, a wheel dog and said, “That dog has never done a 1,000 mile race and he was rock solid. Kept his head in the game the whole race. I dropped my main leader Maple in Shaktoolik so we did a lot of leader training for the last 300 miles. It took a lot a patience but it’ll pay off.” Laura earns the coveted Iditarod finisher’s belt buckle with making Nome today. She arrived in 42nd place with 10 dogs on her gangline. She covered the distance from Fairbanks to Nome in 10 days, 3 hours and 40 minutes. I suspect that’s a record that Laura will want to challenge, perhaps even next year.

Neese is trained in Veterinary Technology. Laura became interested in running Iditarod through home school projects. She started her own kennel with just one dog but that grew quickly. Then the Ohio native hooked up with Stielstra’s Nature’s Kennel in the Upper Peninsula of Michigan. She worked under the mentorship of Ed Stielstra, a veteran of 8 runs to Nome. Laura gravitated toward long distance mushing over sprint or mid-distance. She completed the Yukon Quest in 2016 and now the Iditarod in 2017. The races are very different. Hearing what Laura appreciates about each, will be very interesting. Does she like the longer distances between checkpoints and the time spent in solitude with the dogs? Or does she like the shorter distances between checkpoints typical of the Iditarod. Does she like the drastic climbs of the Quest or does she like the technical challenges of the Iditarod trail?