Eye on the Trail: Ides of March Brings Eight to Nome 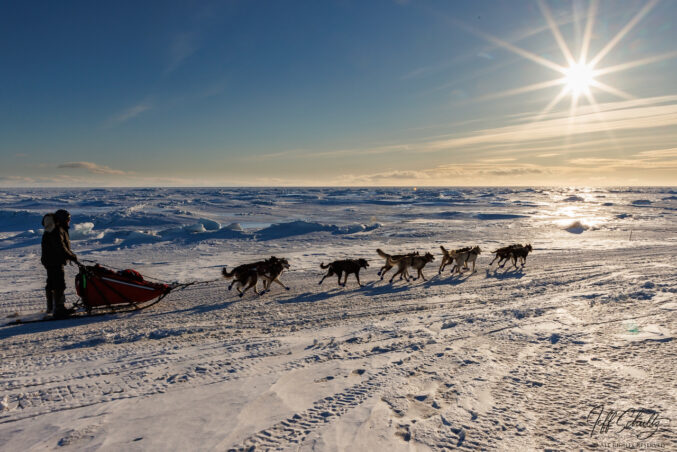 Eight teams competed the 50th Iditarod on March 15th, also known as the Ides of March.  The Ides comes from the Roman calendar originally noting the deadline for settling debts.  In 44BC it was the day Julius Caesar was assassinated, a real turning point in Roman History.  In 2022 it was the day marking the crowning of the 50th Iditarod Champion.  In a good way, it marks the beginning of the end of the current racer as musher stream in from White Mountain to claim a place in the history of Iditarod.

After welcoming champion Brent Sass and runner-up Dallas Seavey to the burled arch, race fans had the whole day to enjoy Nome and all that goes on during Iditarod week before returning to Front Street for the arrival of mushers three through eight. 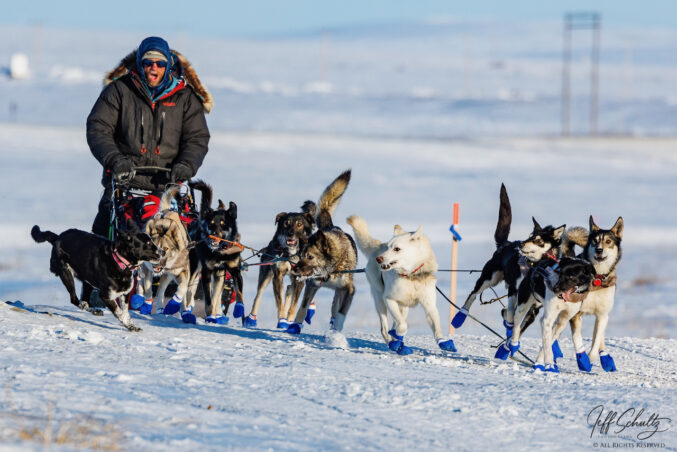 In third place, Jessie Holmes came in at 19:39.  Jessie had nine dogs in harness and completed the race in 9 days, 4 hours and 39 minutes.  His average speed was 4.37 mph.  A native of Alabama, Holmes at the age of 18 decided to go north.  Although his intended destination was Alaska, he worked in Montana as a carpenter for three years before finally making it to the Last Frontier.  He started running a trap line on the Yukon River, a job he needed dogs for.  Soon he took to the mid and long distance race circuit.  In 2017 he won the Kobuk 440 and in 2018 he earned Rookie of the Year honors by claiming 7th place in Iditarod.  His mushing career was really underway.  As of yesterday, he’s finished five consecutive Iditarod runs.  With his 3rd place finish he has now placed in the top 10  in three of his five runs to Nome.  Holmes is well known for his role in the TV documentary, Life Below Zero.  Holmes lives in Brushkana and trains on the Denali Highway. 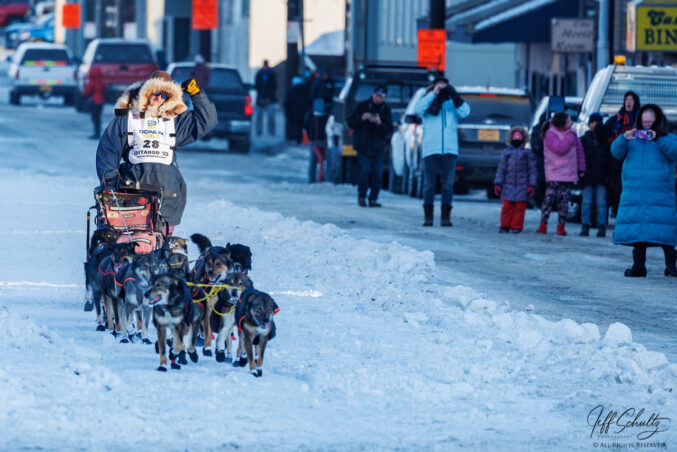 Dan Kaduce came into Nome with fourteen dogs in harness.  He is the only musher in the race that can claim the honor of completing the race without returning any dogs!  This is a tribute to Kaduce’s skill as a dog man and is not easily accomplished and almost unheard of for a top 10 finisher.  Records are readily available going back to 2006.  Doing a search, there are two mushers in the TOP 10 who’ve finished with a full line of dogs since 2006 – 4th place Dan Kaduce in 2022 and 5th place Jessie Royer in 2017.  It’s a big deal, congrats Dan!  Dan, owner and operator of Dew Claw Kennel along with his wife Jody Bailey, finished with an average speed of 4.36 mph.  His time from Safety to Nome is 2 hours and 33 minutes.  This is Dan’s 4th Iditarod.  He earned Rookie of the Year honors in 2010.  Is this a theme for the top five this year?  Sass and Holmes were also Rookie of the Year honorees. 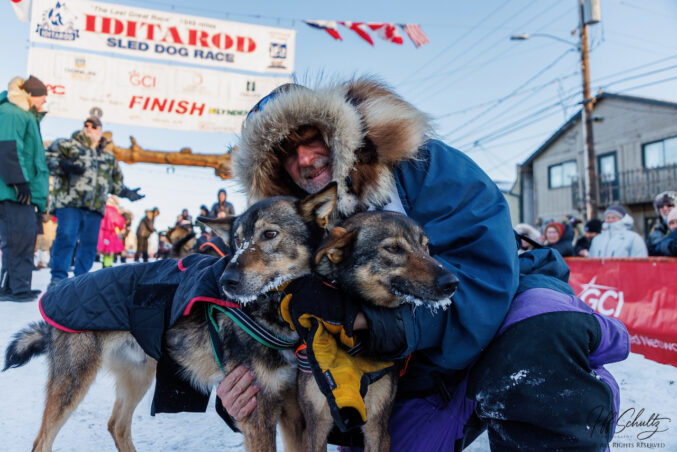 Former Champion Peter Kaiser of Bethel has made Nome to claim 5th place.  Kaiser earned Iditarod Gold in 2019.  Over all he’s finished in the top 10 seven times.  In the current run he averaged 4.33 mph.  Kaiser says that his family has always had dogs.  The Kusko 300 is staged out of Bethel.  He grew up watching that race and likely participated in the junior version of the Kusko.  He’s won the Kusko multiple times and says his time on the runners during that race helped him decide to try the 1,000 mile Iditarod.  Of twelve Iditarod runs, Peter has been in the top 20 for every run except for his rookie year.  He’s finished in the top 10 in seven trips to Nome.

Sixth place finisher, Richie Diehl is from Aniak.  Judging by his 3 sentence bio, he is a man of few words.  Richie says his greatest accomplishment is mushing-winning the 2021 Kusko 300.  Diehl has completed Iditarod nine times in ten attempts with three top 10 runs.  In 2018 Richie ran the northern route in 9 days 23 hours and 19 minutes for 6th position.  For this northern route run Richie improved his time to 9 days, 7 hours and 2 minutes.  His average speed was 4.32 mph.

The 2021 Rookie of the Year, Chad Stoddard has claimed 7th place.  Stoddard works and trains with Dallas Seavey out of Talkeetna.  Chad’s rookie run came on the Gold Trail Loop so it’s not accurate to compare times between his two races.  Chad previously finished in 23rd place and improved to 7th place, an admirable 16 rung climb up the place ladder.  His average speed for 2022 was 4.29 covering the distance in 9 days, 8 hours and 28 minutes.  Chad was born in Anchorage but grew up in Washington state.  He has worked in Wyoming giving dog tours but Alaska called.  After college he returned to apprentice with Lance Mackey and others.  Through is grandfather he has family ties to the village of Nenana and mushing history when mail was carried by dog sled throughout bush Alaska.

It was Home to Nome for Aaron Burmeister the 8th place finisher of Iditarod 2022.  He’s been racing Iditarod over the past 28 years but this year prior to the race he announced a change of plans.  Desiring to spend more time with his wife and children, Aaron said the 2022 run would be his last Iditarod for the time being.  He will continue to maintain his kennel and act as mentor and coach to his trusted kennel partner who’ll be racing the team going forward.  When Insider interviewed Aaron back in Unalakleet, he was clearly emotional about being on the runners and not planning for the next race. Burmeister has completed all of his twenty-one attempts to Nome.  He has eight top 10 finishes claiming all of the top five spots except champion.  His best northern route time came back in 2014 – 9 days, 5 hours and 46 minutes to claim 10th.  Aaron completed his 2022 run in 9 days, 8 hours and 35 minutes with an average speed of 4.29 mph.

That’s the action from Nome for the Ides of March!  The march continues to Nome with three mushers arriving very early on Wednesday morning with more to follow.  Thank you to Jeff Schultz for his photos that tell the story of Iditarod.