Eye on the Trail: Musher Symposium in Michigan UP

As the foliage of the deciduous trees changes color, as the days become shorter and as the temperatures drop, clearly fall is in the air. Ed and Tasha Stielstra of Nature’s Kennel in the Upper Peninsula of Michigan provide another sure sign of fall, the Annual Mid-west Sled Dog Symposium and Iditarod Teacher’s Conference. This year marked the 9th Symposium. 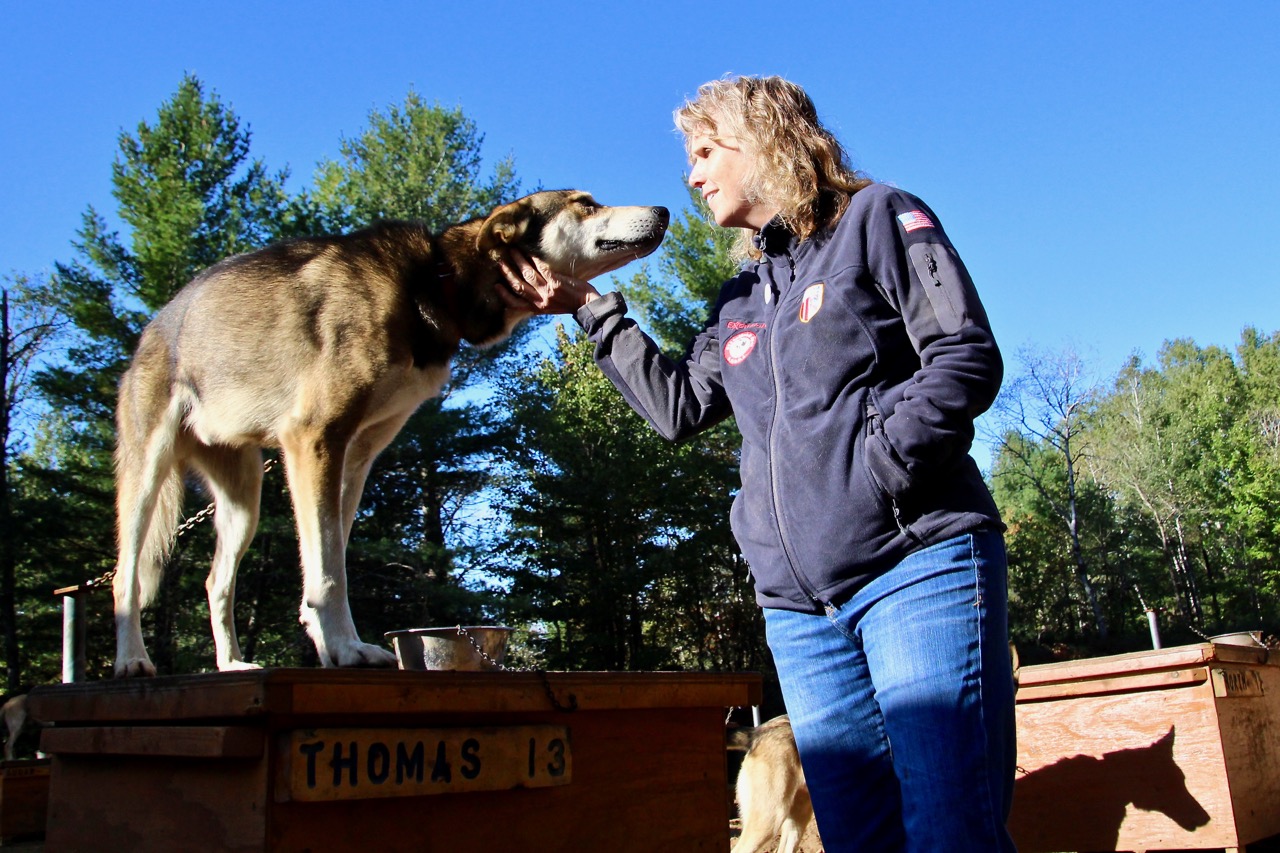 2013 Iditarod Teacher on the Trail, Linda Fenton, talks with Thomas in the race kennel.

The symposium offers something for everyone. Sessions throughout the day provide valuable information for recreational, sprint, mid-distance and marathon mushers alike. Don’t have a team but want to enjoy the out of doors with your single dog? There’s also valuable information for you. Don’t have any dogs but have been bitten by the sled-dog bug and have become an avid fan? There’s information for you. For teachers, sled dogs provide incredible hands on, true to life learning experiences that motivate and captivate students while meeting educational standards and improving test scores. Attending the symposium is a wonderful weekend spent with like-minded, high-energy good-natured sled dog enthusiasts. 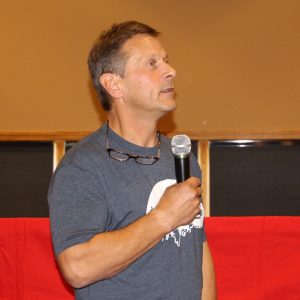 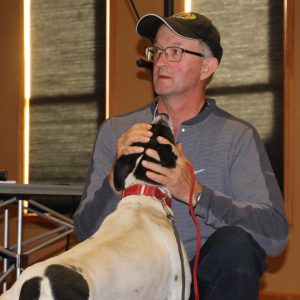 Accomplished sprint racers, Ken and Lori Chizek opened the Symposium. The Chizeks have thirty-five years of experience with sprint dogs. They’ve made it their goal to learn how to compete in and win any of the sprint classes they enter. They’ve accomplished this goal with gold from the Limited North American Championships, the Fur Rondy, the Tok Race of Champions and many, many more. 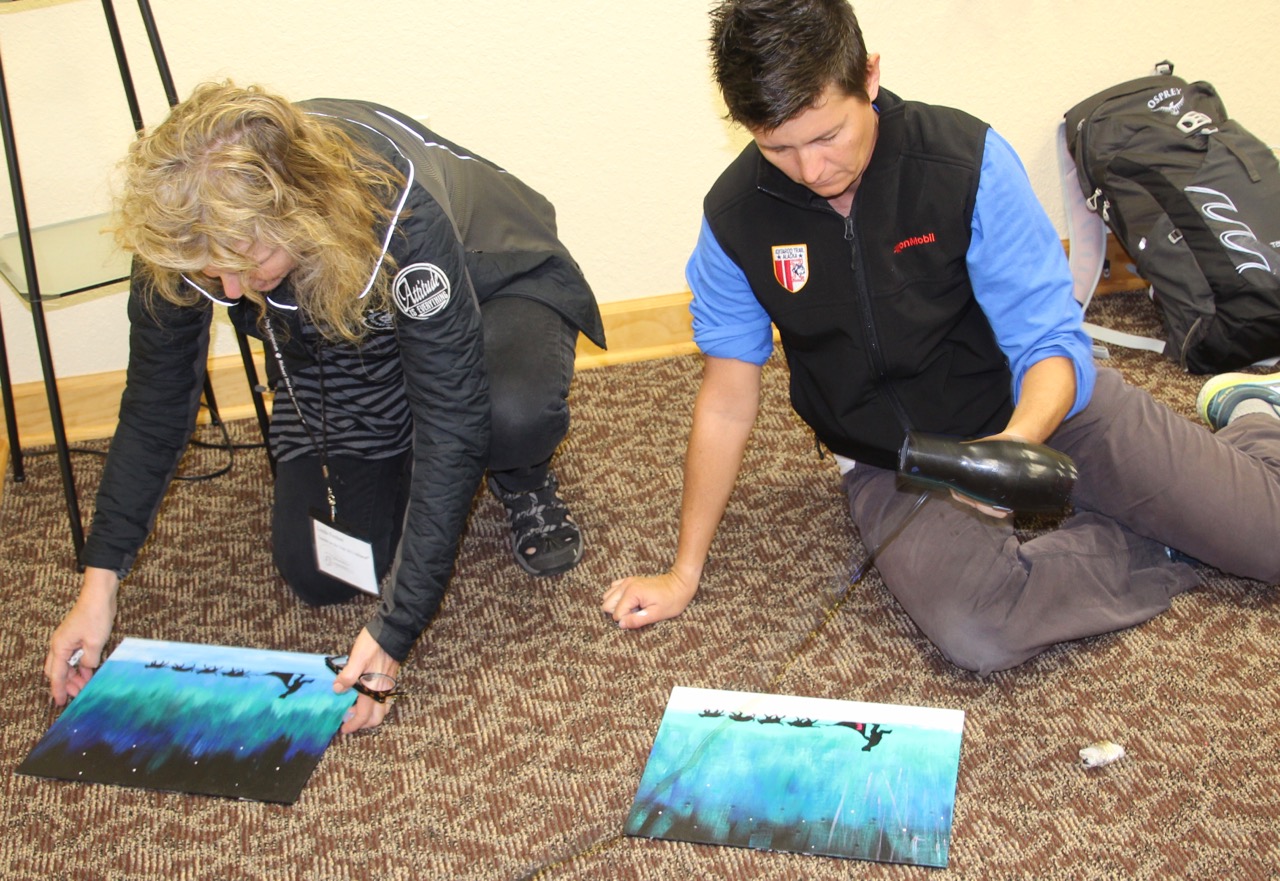 Linda Fenton and Erin Montgomery put the finishing touches on their art work.

To finish out the morning, Symposium goers had the choice of a Question & Answer session with a panel of dog training experts or attending Art with Anne to create their own sled dog art masterpiece. The panel of experts, Ed Stielstra, Laura Neese, Ken & Lori Chizek and Martin Buser shared their knowledge from their years of experience in training sled dogs. Questions for the experts ranged from, “Do you bring dogs into the house” to “What are the biggest challenges to the future of the mushing lifestyle.” The panel of experts also addressed questions about musher dress, diet, genetics, equipment and positive training.

Royal Canin research Manager, Russ Kelley shared his knowledge and expertise with mushers. He covered the topic of Working Dogs: Which Diet and How Much? Royal Canin has been a long time sponsor of Nature’s Kennel. 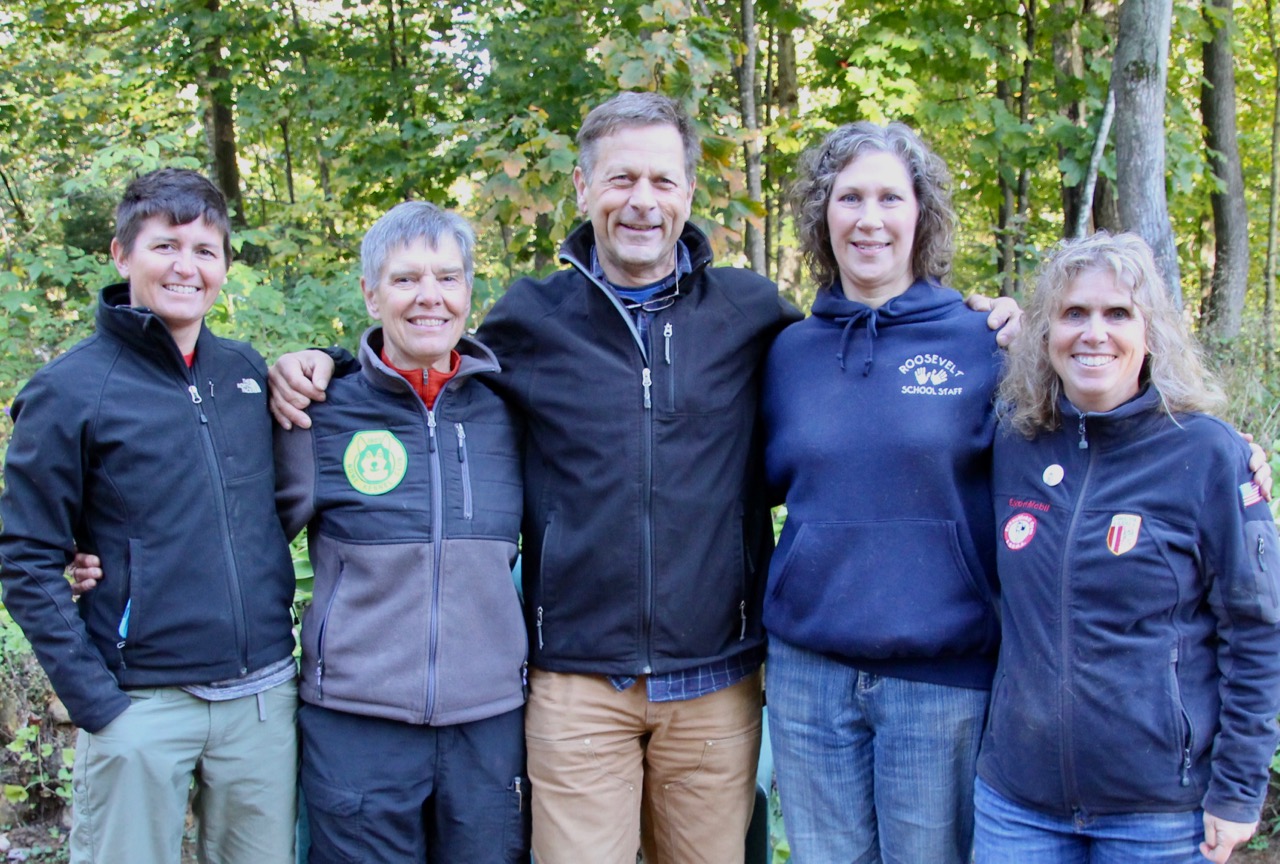 Past Iditarod Teachers on the Trail and teachers who use Iditarod as a theme for education presented best practices for the classroom. Linda Fenton, Katie Kunze and Nancy Wendt shared dynamic lessons for elementary students. Erin Montgomery spoke of best practices for the middle school classroom and Terrie Hanke did the same for the high school. Persons attending the session learned about the resources for fans and educators that can be found at Iditarod.com. Many stories from the trail were shared and Eye on the Trail blogger, Terrie Hanke provided insight into her work of bringing the race to fans and enthusiasts around the world.

Author/musher Deb “Danny” Glenn has driven over 10,000 miles with her dog team in the snow covered back country. Her books provide take-away messages of hope, faith, love and promise. Her stories exemplify core values – honesty, respect, diligence, fortitude, humility, integrity and gratitude. Glenn read to her audience from her most recent series, The Aashka Adventures.

Other afternoon sessions covered Dryland Mushing and Mushing around the World. Annie Hammond presented information on how to get started in mushing via the sport of Dryland. It’s a great way to get involved in mushing for beginners and it’s a fun and challenging experience for seasoned dog drivers. Annie’s vehicle for Dryland is bicycle like but without a seat. Dr. Jerry Vanek has served as a Chief or Trail Veterinarian on 120 races and expeditions in 10 countries on 5 continents. His most recent work has been with sled dog kennels in Norway, Sweden, Finland, the Netherlands, Poland, Czech Republic Austria and France. Vanek shared a power point and spoke of the differences between mushing as we know it and mushing in Europe.

Four-time Iditarod Champion, Martin Buser, who owns and operates Happy Trails Kennel was the featured speaker for the Symposium. Martin delighted the audience with not only his stories but also his vast knowledge of the science of sled dogs and the sport of mushing. In his keynote and other presentations throughout the day, he emphasized the importance of “Why” over “How.” Buser has signed up for his 35th Iditarod. Buser has the longest string of completed Iditarods – thirty-four, but who’s counting. Martin is still aiming at the illusive fifth win. He said, “The problem with running thirty-four and finishing them all, I think I’m tough enough to win one more. The chances of winning are like taking 18 dice (one for each dog, the musher and the sled) rolling them and having them all come up sixes. That’s how many variables there are – genetics, nutrition, camping, weather, snow conditions, dog care, sled and musher.”

Buser came to Alaska from Switzerland to run sled dogs. After running Siberians from the famed Earl and Natalie Norris kennel in his first two Iditarod runs, he watched the finish of the Fur Rondy. An idea formed in his head based on seeing the speedy dogs cross the finish line. He had no money to buy into the hounds he thought were the future of Iditarod but he came up with a plan that was the basis for his Iditarod success. Buser approached known successful sprint mushers offering to raise a litter of puppies for them. He’d nurture and train the puppies then return them after a year. The sprint musher would keep the fast half of the litter and Buser would take the slower half. He didn’t want fast dogs that were well suited for sprint racing, he wanted the slower multi-gated dogs that would be well suited and fast for marathon racing. Buser has authored DOG MAN: Chronicles of an Iditarod Champion. 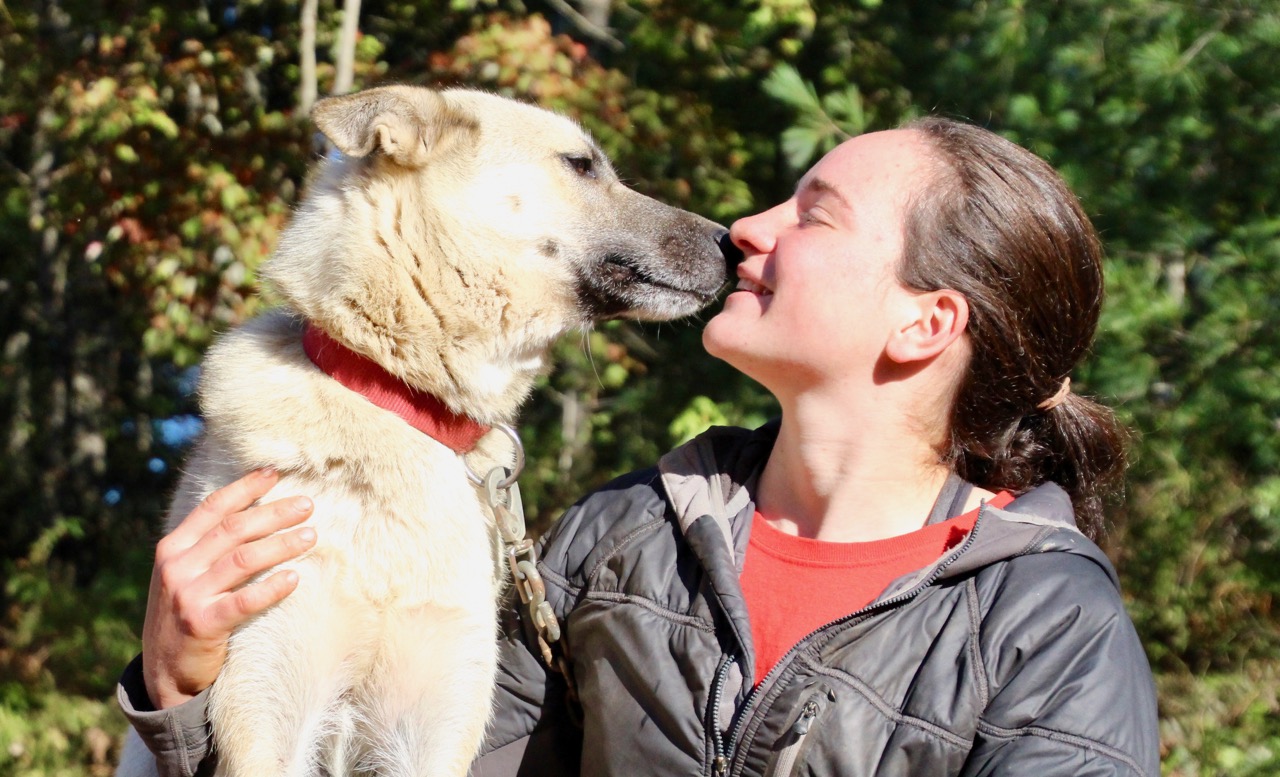 Laura Neese with her tried and true leader, Maple at the race kennel.

Ed and Tasha Stielstra hosted an open hose at Nature’s Kennel on Sunday morning. Ed has completed Iditarod many times and has a long list of mid-distance races to his credit. Twenty-one year old Laura Neese has been running out of the Stielstra kennel for the past three years. Year one, she completed the necessary qualifying races. Year two she took on the 1,000 mile Yukon Quest and became known as the Quest’s rookie sensation. In 2017 Neese completed her rookie Iditarod. Laura is back for Iditarod again this year, using knowledge gathered from Iditarod and Quest, she has specific goals and a very defined training plan for the upcoming race season. On hand also was Justin Stielstra, Ed’s nephew who completed his rookie Iditarod in 2017. Along with the racing Kennel, the Stielstras operate a touring business. By this time of the year, the racing dogs and the touring dogs have been separated and training, while very different, has begun in earnest for the soon to arrive winter and mushing season.