The official concept of Eye on the Trail is to hang with the back the pack.  Official concepts don’t always work out as there are numerous factors that come into play.  In my case, it’s mostly flying.  When there’s a seat I fly and that may put me out with the leaders or even ahead of the race. 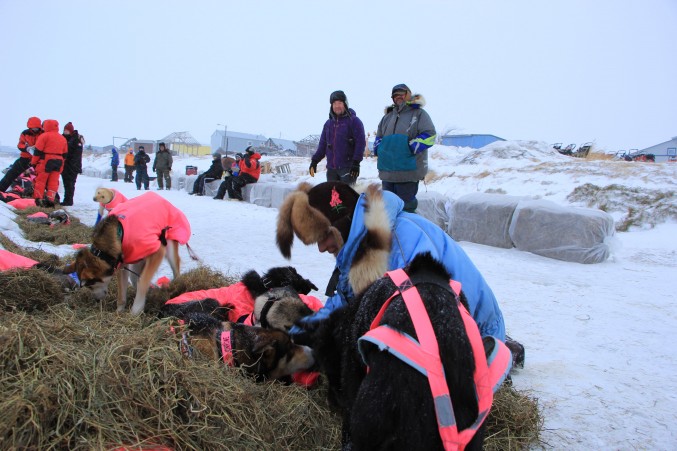 DeeDee and Dogs in UNK

Three mushers were on the slough in Unalakleet on Monday night.  DeeDee arrived just before sunset.  Jodi Bailey and Paige Drobny had come in earlier in the afternoon.  Even though temperatures were warming, the winds were brisk and snow was falling.  For a while we wondered if it was snowing or if previously fallen snow was being whirled around by the wind.  No answer to that question except that visibility was very limited.

Paige Drobny was walking dogs around on a leash prior to leaving.  So Paige, are you trying to limber them up or are you giving them chance to pee and poop before they actually head out of the checkpoint?  She said it was a little of both although with the pooping, the first mile out of a checkpoint was always known as the brown mile.  Paige likes walking her dogs before harnessing to leave a checkpoint as it allows her to see if any problems have developed during rest time.  It’s better to know about a sore wrist or shoulder before leaving the checkpoint compared to seeing it a few miles out and then carrying the dog to the next checkpoint.  Good practice Paige.

Paige left Unalakleet in swirling snow as darkness fell.  Her dogs went out enthusiastically, trotting with tails high.  The trail on the slough going out of town was tough for even the best of the dog teams.  It’s a wide expanse of snow and frozen water with some trail stakes.  As happened for many other mushers, it took Paige a little time to get her leaders on the exact trail out of town.  A couple of hours later, we heard a musher wearing bib 58 was returning from the north.  Paige had gotten a few miles out and with the blowing snow and lack of trail markers she lost the trail.  Trail markers were few and far between in the area due to the ice and it being nearly impossible to get markers to stand and stay in the wind.  Drobny was wise to return to find the trail.  She and Jodi Bailey left the checkpoint at 0237 this morning and have both arrived in Shaktoolik. 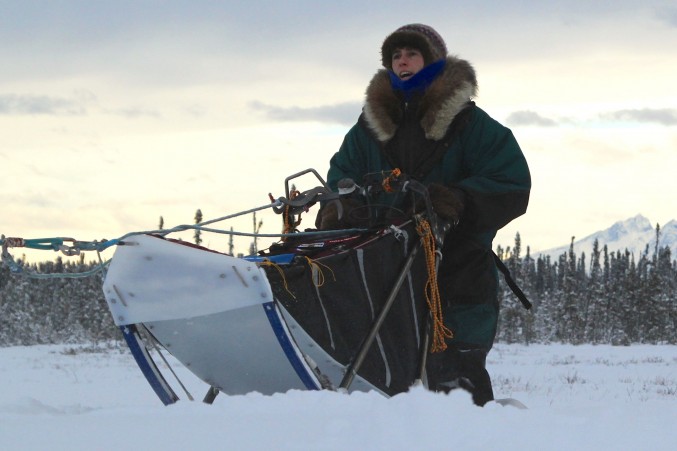 Jodi Bailey’s team under the leadership of unfailing Orchid was resting on the leeward side of a berm at the checkpoint.  If I were going to pick a perfect place in UNK to rest, team Bailey had it.  Jodi’s team looked so spritely coming into the checkpoint, we questioned whether she would stay.  While it’s sometimes hard to teach kids the importance of “please” and “thank you,” Bailey called to Orchid when they were parking, “Orchid, haw please.  Good Girl, thank you.”  Bailey works diligently on leader training during the summer.  Dan Kaduce, Bailey’s husband demonstrated the fruits of that work last year as he was leaving UNK.  To regain the trail outside the checkpoint, Dan would have to make a sharp right, then an immediate left.  With Orchid’s leadership, the team wove its way through the berms and other dogs teams flawlessly.  Good job with that summer training, Jodi.

Easy enough to see DeeDee from a far distance with the neon pink sled bag, harnesses and booties.  Those booties with the Shell logo are hot items as souvenirs.  A teacher from UNK gathered most of them up to send to a teacher in Oregon to use as classroom incentives.  Of course, they’ll be washed first.  DeeDee spends time with her dogs in the checkpoints.  She beds them down just right, she removes booties, she snacks them and feeds them and feeds them and snacks them.  She massages wrists, applies foot ointment and talks to the dogs constantly.  She knows the intuitive nature of dogs and works to keep her own attitude positive for the sake of the dogs.  DeeDee chose to sleep a little longer rather than run to Shaktoolik with Drobny and Bailey. 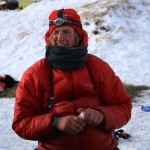 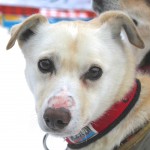 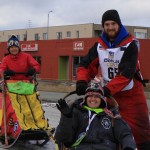 Take a look at the race standings and you’ll see a couple of new to the sport young guys in the top ten, Wade Marrs and Travis Beals.  These guys aren’t afraid to personally add their athleticism to the power of the dogs.  Beals is a race veteran with two 37th place finishes.  Marrs, a veteran of 4 races with one scratch, finishing 16th in 2014.