Eye on the Trail: Petit and Redington Finish 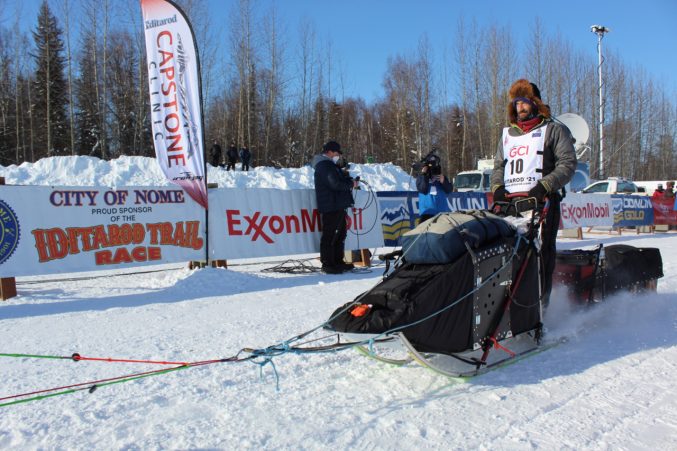 Nicolas Petit is the 6th musher to finish Iditarod XLIX.  He covered the 67 miles from Skwentna Checkpoint to Deshka Landing in 9 hours and 19 minutes traveling at 7.19 mph.  Of the 7 teams who have finished so far today, Nic is one of 4 who’ve been in the 7 mph range.  Others have made the trip averaging in the 6 mph range. 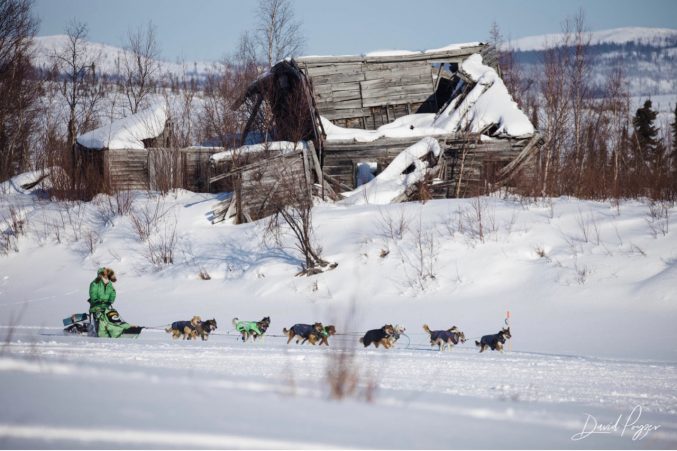 Ryan Redington Glides by a Collapsed Building near Iditarod

Ryan Redington, wearing his bright coat, riding his bright sled with his dogs wearing bright booties and coats is the 7th musher to finish.  He covered the distance from Skwentna with an average speed of 6.42 miles with 6 dogs in harness.

Petit has had eleven starts with 8 finishes since his first race in 2011.  He’s been in the top 10 six times with a personal best of second place.  Nic was born in France, raised in New Mexico and then moved to Gridwood, Alaska.  He took a job with Jim Lanier at his Northern Whites Kennel and helped Jim train for the 2011 Iditarod.  Petit took to the runners himself doing qualifying races under Lanier’s tutelage.  When Jim had to sit out the 2012 race with a hip replacement, Nic stepping in to take Jim’s spot in the race.  Nicolas has become somewhat of a legend in the Copper Basin 300 race and the Willow 300 race, winning both for the past four years.

Ryan Redington is a colorful but quiet figure on the trail.  Equal to the bright colors he sports, he is a mentor for young mushers and an unequaled ambassador of the sport.  Redington has coached a number of mushers in the Jr. Iditarod.  Morgan Martens from Brule, Wisconsin ran a Redington team this year and became the Jr. Iditarod Champion at the age of 14.  Julia Cross of Thunder Bay, Ontario also had the privilege of running Redington dogs in the Jr. Iditarod of 2020.   Emily (Krol) Dinges  ran a couple of teams from Ryan’s kennel in the Jr. Iditarod.  Ryan knows the future of mushing lies in youth participating in junior races and he’s quick to support them.  Ryan has had 14 Iditarod starts and now has 7 finishes.  He has improved his previous personal best finish by one place to 7th.  This is his second top 10.  Redington calls Skagway home but lives for part of the year in northern Wisconsin and has won gold in the John Beargrease Sled Dog Marathon run in northern Minnesota.