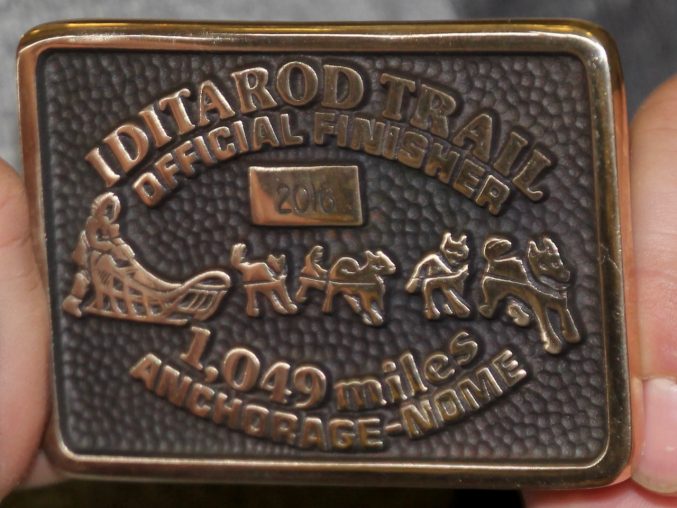 Belt Buckle Awarded to All Rookie Finishers of the Iditarod

Joshua McNeal made Deshka Landing and the un-burled arch at 07:07 on Wednesday morning.  Joanna Jagow followed at 08:54 and Sean Underwood closed out the morning arrivals at 11:48.  These three along with all rookie finishers and Rookie of the Year, Chad Stoddard will receive the coveted belt buckle.

McNeal drove a team of nine happy dogs in from Skwentna to claim 28th place.  The temperatures were warmish by mushing standards and the trail was a bit soft but for a rookie heading to the finish line, it was a glorious day!  McNeal’s kennel is made up of Ken Anderson dogs.  Anderson is a celebrated veteran of Iditarod and the Yukon Quest.  Josh worked for Anderson as a handler and when his team became available, McNeal felt this was the avenue into mushing he was waiting for.  So he purchased Anderson’s team and established his own kennel.  Crooked Creek Kennel was originally located in Kasilof then desiring better training conditions, Josh and his wife, Jobie, purchased land south of Fairbanks and moved.  For Josh, there is no better feeling than being in the middle of nowhere traveling with his dogs through some of the most beautiful and rugged country in the world.

Joanna Jagow of Fairbanks is a pediatric nurse by vocation and a musher by avocation.  Jagow came to the Deshka finish in 29th place.  As a youngster Joanna’s family ran a trap line on the Porcupine River.  Her father used sled dogs to tend the line and at a young age Joanne began to follow him driving her own small dog team.  From tagging along behind dad, Joanne conceived the dream of running the Iditarod.  But first she participated in mid-distance racing to build her skills.  Her dogs come from Mackey, Kleedehn and Cadzow lines.  She’s raised most of them since pups.   Joanne was pretty awed to be standing at the finish line of the Iditarod.  Jagow was tested on the trail when she returned her two trusted leaders to home but the young dogs that stepped up into leading the team inspired her.  She thought the Alaska Range with the Gorge and the Steps was really beautiful.  Her most challenging portion of the trail was navigating the snowless Burn at night.

Sean Underwood, driving Dallas Seavey dogs, rounds out the top 30 teams.  It took Sean two years to achieve veteran status but the experience he’s accumulated in those two years is monumental.  He was with veteran Tom Knolmeyer and Matthew Failor last year when they encountered serious over flow just thirty miles outside of Nome.  The trio scratched so Underwood came into his second Iditarod as a rookie.

Sean first came to Alaska to commercial fish with his Aunt & Uncle.  He enjoyed the summers so much he decided to try a winter and his winter included handling and training with Jeff King.  Underwood had completed his qualifiers with an eye on running the 2021 race.  Jeff however had emergency surgery a few days before the 2020 race so Sean took his place on the runners.  Sean says this year he’s pleased to have clothing in the drop bags out on the trail that fits him, socks especially.  When asked if he was proud of his dog team Sean replied, “Absolutely they crushed it!”

Susannah Tuminelli in bib #31 crossed the finish line in 31st place.  Tuminelli was running a team of Kathleen Fredericks dogs from Shameless Huskies Kennel.   Susannah is an outdoor adventure enthusiast and made the big jump from mushing in the Boundary Waters Wilderness area of Minnesota to running the Iditarod in Alaska.  From Massachusetts, she has always been a lover of dogs and the outdoors.  Mushing is the prefect way for her to combine those passions.  She has wanted to run Iditarod ever since coming to Alaska.  For the past two years Susannah has been learning the sport, participating in mid-distance races and completing her qualifiers for the race of her dreams.  Tuminelli talked to each of her dogs at the finish line then answered questions from Insider.  She said it was good to be home. The last run was slow, hot and rough due to snow machine traffic.  She told her dogs when the got home they’d all snuggle on the couch, eat and watch movies.  Tuminelli says she thrives in situations of wilderness exploration, self-sufficiency and adventure.  That seems to pretty much describe Iditarod and it seems Susannah thrived on the Gold Trail Loop.