Eye on the Trail: Rounding out the Top Twenty 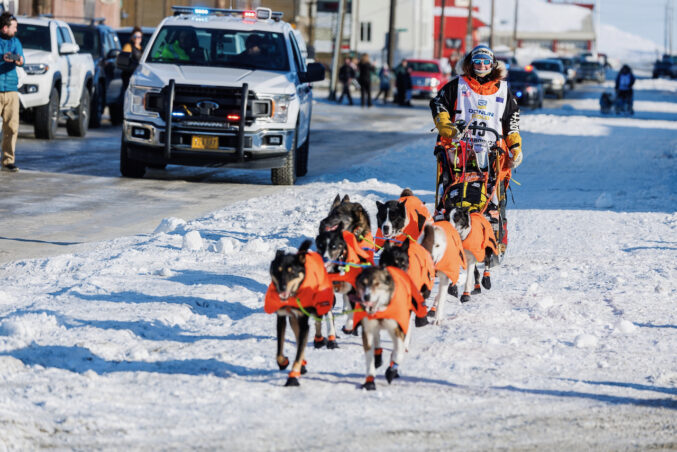 Michelle Phillips of the Yukon Territory led the remainder of the top twenty into Nome on Wednesday afternoon.  Michelle earned 17th place with a time of 9 days, 21 hours and 52 minutes.  Her average speed was 4.05  mph.  Michelle was welcomed under the burled arch by her partner, Ed Hopkins, the mushers who introduced her to the sport of mushing.  Michelle trained as a figure skater for many years but once she stepped onto the runners, she was hooked on mushing and traded her skates for sleds, Arctic boots and bulky insulated clothing.  Phillips has run seven Yukon Quest races.  As of today she has completed twelve Iditarod runs with 11th being her best finish.  In 2020, also a northern route year, Phillips finished in 13th place with a time of 9 days, 22 hours and 42 minutes.

In 18th place is Lev Shvarts with a time of 9 days 22 hours and 3 minutes, averaging 4.05 mph.  Lev holds a degree in electrical engineering but quit his desk job and moved to Alaska to mush dogs.  He completed his first Iditarod in 2015.  Now he’s run the last  five years in a row.  His 2020 run over the northern route took 11 days, 3 hours and 0 minutes.  Lev said this race was tough, especially the wind.  Shvarts says his hobbies are tinkering, tools and tatoos.  The announcer asked him if he had to do any tinkering on his sled during the race. Lev replied, “No, I built it right the first time.” 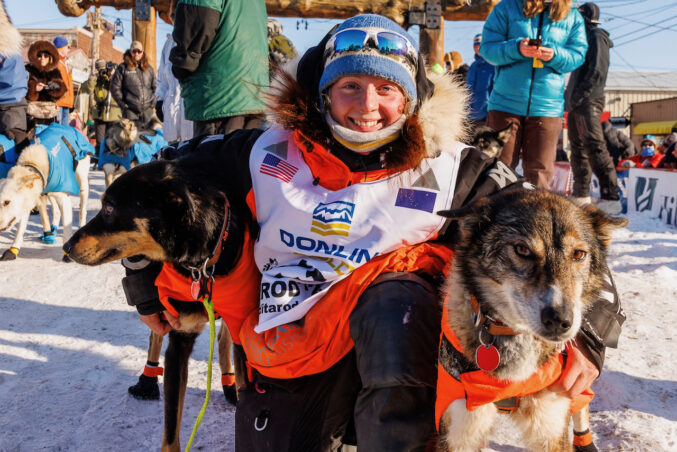 Rookie Hanna Lyrek, age 22, made Nome at 17:43.  In 19th place, she is the first rookie to finish the race.  She will receive Rookie of the Year honors.  Hanna was born in Alaska, then the family moved to Norway, her mother’s homeland.  Trine Lyrek is Hanna’s biggest fan and was on hand to greet her daughter.  Trine ran Iditarod in 2005 so there’s a two generation tradition that’s been established.  Hanna completed her rookie run and earned her finisher’s belt buckle with a time of 10 days, 2 hours and 43 minutes.  Hanna has been preparing for the Iditarod for five years.  In doing so she tackled all the longest races in Norway at a very young age.  The longest race Norway offers is 1200 kilometers, equal to 720 miles.  That would be the distance to Unalakleet.  It will be interesting to hear her thoughts on the extra 300 miles. 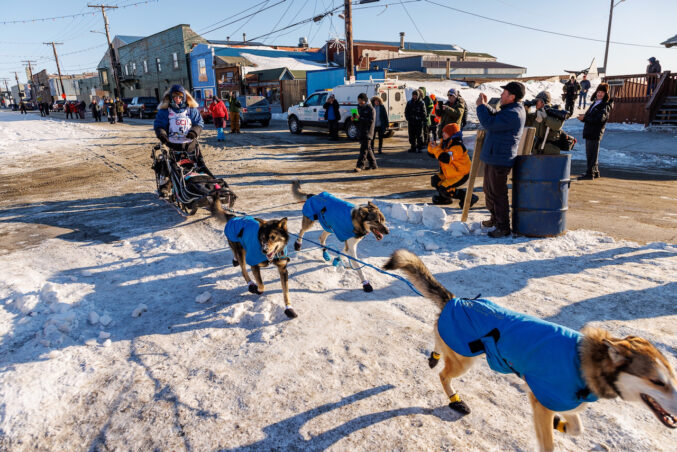 In 20th position is the Squid Acres musher, Paige Drobny.  Paige and her husband Cody Strathe started mushing in 2006 as a way to see the great Alaskan Wilderness.  They enjoyed camping with their dogs for a couple of years then just for the fun of it, entered the Gin Gin 200 and found they loved racing.  Paige has now completed the Iditarod eight times with four finishes in the top 20 including seventh place finishes in 2019 and 2020.  With an average speed of 3.93 mph Paige completed her eighth trip to Nome in 10 days, 2 hours and 43 minutes.  Paige and Cody have run two teams out of Squid Acres in the 2016 and 2021 Iditarod.  During interviews by Insider Liz in Koyuk, Hanna Lyrek said she was very appreciative of traveling with Paige, especially on the windy crossing of Norton Sound.  Looks they stuck together the rest of the way to Nome.