Eye on the Trail: Snow, SNOW and MORE SNOW 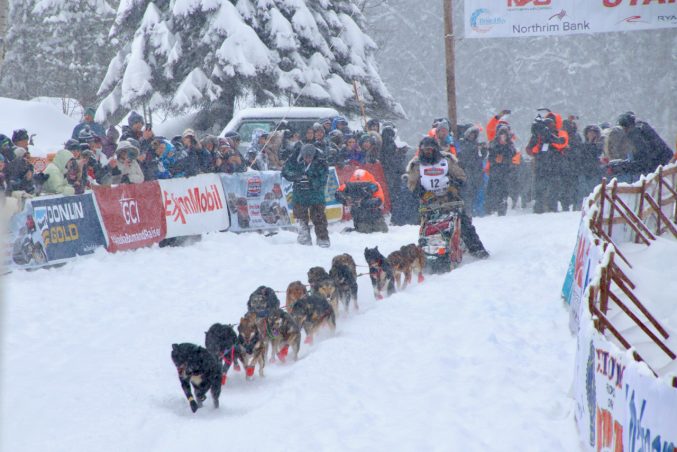 The snowy start for Iditarod XLVIII. Lance Mackey with a single leader. Photo by Kelly Villar

It was a start like nothing in the recent past.  Nobody can remember having snow falling at a rate of 3 inches per hour for the start of Iditarod.  In the past 24 hours, 16 inches of snow has fallen in Willow.  Some mushers think the snow will slow the teams down early on which could lead to having some extra fuel in the tank for later in the race if the trail turns hard and fast.  Thomas Waerner says he trains in deep snow conditions on a regular basis in Norway.  Matt Failor says there has been well above average snow fall this year so fresh deep snow is something teams have seen – it’s nothing new.  Nicolas Petit told the Insiders, “Speed is relative to conditions.  It’s all about energy levels.”  The snowy start of the 2020 Iditarod is something the mushers feel prepared for.

Having worked Communications at Skwentna for at least 10 years, I can tell you the excitement is building for the River Crew and the Cabin Crew who run the Skwentna Checkpoint as they await the first team to arrive.  Teams are well on their way to the Outback house perched high on the bank of the Skwentna River.  Peter Kaiser is leading the charge followed by Martin Massicotte, Ramey Smyth and Tim Pappas.

Wearing single digit bibs, those guys all started at the front of the pack.  The teams at the front right now are running very close to 8 mph or just a bit more.  That speed takes on more meaning when looking at the speed from last year for the first 80 miles of the race.  The 2019 trail was hard and fast so dogs were trotting above 10 miles per hour and they were in their glory.

Snow, SNOW and MORE SNOW is having an immediate effect on run times.  There is new fallen snow from Willow to the Alaska Range.  Totals in Willow were impressive, something around 16 inches.

Mushers were dressed to stay warm and dry with many types of inner and outerwear.  Dogs are naturally dressed to stay warm and dry.  Think of it this way.  Dogs have a very warm layer of insulating fur, something like you putting on a heavy fleece jacket.  They have the longer fur that makes them weather proof which would be like you putting a raincoat over that heavy fleece.

I talked with the crew from Skwentna just before they went out to the checkpoint by snow machine.  Having worked the checkpoint for years and years, they are pros.  There will be 40 plus volunteers working the checkpoint from opening to closing.  The river crew will set up the banner, pack the snow, set the straw out for parking, sort drop bags, cut the hole in the ice for water and set up the propane stove to heat water.  This is a well organized checkpoint, run by experts.  The checker is Keegan Fritts, the son of long time checkpoint workers Rob and Cindy Fritts who worked with Joe and Normal Delia.

The run to Skwentna will take longer than usual but even so, between the first team in and the last team out, Skwentna will only be open for about 12 hours.  Traffic in early checkpoints is very dense and intense.  There could be times when there are four teams waiting to check in at the same time.  With the density of traffic, there is a large staff of veterinarians on hand to do dog physicals.

Follow the race through GPS Tracker and Insider at www.iditarod.com.  Information about your favorite team is just a couple of clicks away.