It’s Unalakleet in 2013, Aily Zirkle is preparing to depart for Shaktoolik.  She is applying paw cream and booting her dogs.  In this photo, Olivia enjoys Aliy’s complete attention.  That’s the gist of what’s going on in this picture but take a closer look.  Zoom in! 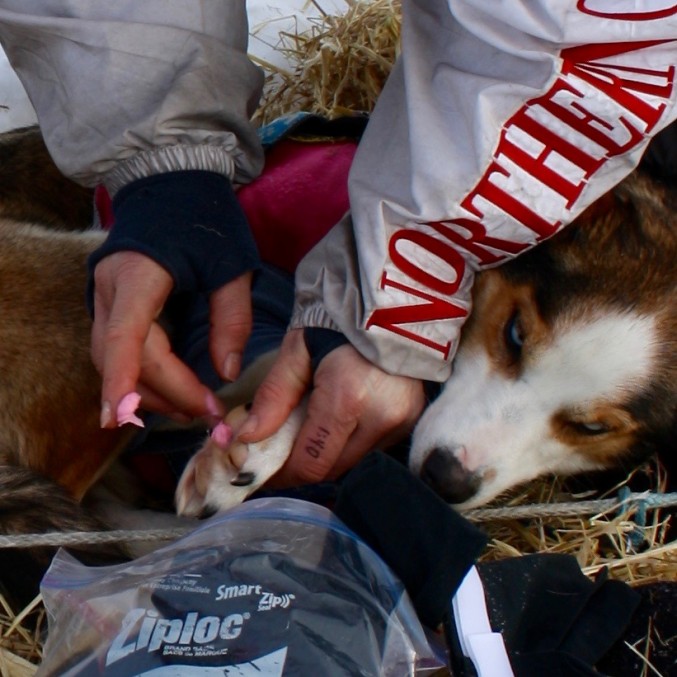 As Aliy applies that wonderful pink paw goop, she has a system that’s very efficient.  She squeezes a dollop of the pink stuff onto not one, but two of her fingers.  One finger’s worth of cream is used between the toes and around the pad of Olivia’s right paw and the other is used for the left paw.  What’s significant here is that it saves Aliy time.  Rather than squeeze goop from the tube onto one finger, set the tube down then apply the cream and the boot to the left paw then pick the tube up and go through the same procedure for the right paw, she’s picking the tube up and setting it down only once in doing two paws.

How much time does that save?  I’m not sure but let’s say it’s 5 seconds for the front and 5 seconds for the back.  That’s ten seconds per dog.  By the time she does the whole team in preparing to depart each checkpoint, that adds up to valuable minutes.  Aliy is noted for finishing with large teams so let’s us fourteen.  Through efficiency, she’s saving two minutes and twenty seconds at each checkpoint.  Multiply that by the number of checkpoints and over the race she’s saving 40 to 50 minutes.

Remember the three years running that Aliy finished in second place?  Remember how close those races were?  In 2012 she was second by 60 minutes.  In 2013 it was 24 minutes.  In 2014 it was 2 minutes and 22 seconds.  Attention to efficiency in doing small tasks can make a large difference.  Mushers who consistently finish in the top ten all have their “efficient” routines.