Eye on the Trail: Hank DeBruin Opens Symposium in Michigan 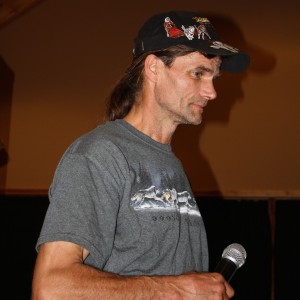 Patience, problem solving and enjoying solitude, those are qualities Hank Debruin considers to be essential for a long distance musher. DeBruin and his wife, Tanya McCready-DeBruin, opened the Midwest Musher Symposium and Iditarod Teacher’s Conference in Curtis, Michigan the last weekend of September with stories of Hank’s thousand mile races. Hank and Tanya own and operate Winterdance Dog Sled Tours and Racing in Haliburton, Ontario.

Winterdance is currently home to 150 pure bread Siberian Huskies. Early in married life when Hank and Tanya were considering racing sled dogs, the couple acquired a pair of dogs and then Tanya gave Hank a sled and gang-line for Christmas. The decision was yet to be made, would they race Alaskan Huskies or would they race Siberians. Knowing full well that Alaskans were the speedsters, the DeBruins decided to race and run tours with Siberians. When they asked advice from one very successful Alaskan sled dog racer, he replied, “Why would you want to drive a Model “T” when you could drive a Ferrari.” For Hank and Tanya, Siberians were Ferraries. Annually, the Winterdance family plays host to 2,000 adventurous dog lovers and mushing enthusiasts for tours.

Tanya and Hank shared the mike telling about their kennel and tour operation. Hank shared most of the stories from his Yukon Quest and Iditarod races. Hank took to the Iditarod trail in 2010 and then again in 2012. He’s been on the Yukon Quest run between Fairbanks and Whitehorse in 2011 and 2014.

From his experiences in running 1,000 miles races, Hank urges every musher to focus on the next problem rather than thinking about finishing. He says, “If you focus on the finish, you’ll never get to the end.“

In Debruin’s opinion, the Quest is the harder race of the two. Why? Mostly due to weather, it’s earlier in February and the weather can be very severe. Quest has only half the checkpoints that Iditarod has. There are much long distances between Quest checkpoints and there’s also Eagle Summit and Rose Bud. Hank enjoys and appreciates the solitude of the Quest.

The trail and experiences in sled dog races can be extremely challenging, seeming insurmountable and actually be close to unobtainable. About challenge Hank says, “Challenges in the Quest and Iditarod bring people back. Without challenges the trail would be boring and nobody would return.” Meeting amazing people, seeing incredible natural beauty and the solitude of the trail as well as the challenge is what calls Hank to the thousand mile races.