When I wrote about the motivation to do well in Iditarod, the reason to push real hard,other than the pure will to win, at the beginning of the race, I wrote about the race within the race, of the elder Seavey and the younger Seavey both having 2 championships each. And now they are in positions 1 and 2 racing hard against the rest of the field and against each other. 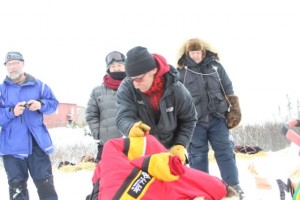 They are both fierce competitors. As soon as Mitch saw here in Koyuk that the run, which felt like an eternity to him, had the fastest runtime, he switched back in full race mode, not that he had actually ever really left it. Both Mitch and Dallas are digging deep. Dallas can handle sleep deprivation very well, yet watching him getting up in Shaktoolik yesterday morning was painful, where he struggled to stand up and keep upright. Once out in the cold, the mushers function better again. Mitch hooking up his dogs here yesterday, went the speed of drool. It was also painful to watch. What normally would have taken him 10 minutes to do, took 45 minutes. It is the lack of sleep, the mind going in slow mode, which mushers battle right now, more than anything. 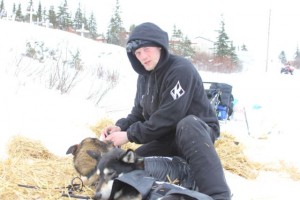 Dallas truly has the strongest team in the race at this point. He build that strength with keeping the runs out of his 24 hr layover in Huslia short. He did not run straight to Koyukuk. He broke that long cold run up and then kept the runs along the Yukon River short, with rhythmic rest rest breaks.  His team was strengthening, instead of weakening. That is paying dividends now. His runtime to Elim was 1 hour faster than Mitch, 2 hours faster than Aaron Burmeister. Dallas played his cards well. The fact that he had to break trail overnight did not slow him down. 7 hrs is an impressive run time to Elim in these conditions. Mitch Seavey  seized the opportunity to make a move on Aaron Burmeister. They will be neck and neck into White Mountain, 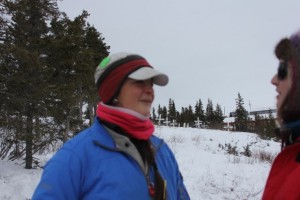 Trail conditions are still incredibly slow out there. Fresh snow, moderate winds, ensure that a well defined broken trail is erased. The second race within the race, the one for Top female competitor is also going on right now, neck and neck. Jessie Royer is currently in a career best 4th position after finishing 7th last year. Aliy Zirkle is 45 minutes behind her in 5th place. Looking at runtimes and knowing Jessie will look at this too, Jessie might have her eyes set on trying to catch Aaron Burmeister. 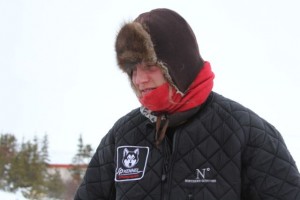 We were going to hit the trail early this morning, but with quite a few mushers en route from Shaktoolik, we have not seen in a while, we are going to stick around for a while trying to get a few more of them covered.Tim just did a nice story about Wade Marrs.