The Iditarod, and all Alaskans, have lost a prominent businessman and benefactor with the passing of Rod Udd, 78, owner of Anchorage Chrysler Dodge Jeep RAM SuperCenter.

Rod was ill for sometime and passed on peacefully at home surrounded by family. He was born on August 25, 1938 in Yelm, Washington to Ragnar and Alice Udd. At just one year of age his missionary parents took him to the Belgian Congo in Africa where he attended Rift Valley Academy Christian Boarding School. Shortly thereafter Rod moved back to the States where he enrolled at Seattle Pacific University earning his degree in nuclear physics. He arrived in Alaska in the mid 1960’s. Soon Rod’s aptitude for business and finance landed him the Fleet Manager position at Anchorage Chrysler Dodge Center. In 1989 he became owner of the dealership taking it to new heights and was active until recently. His business philosophy  was based on community involvement and over the years he helped save the Alaska Aces hockey franchise and became one of the owners, supported the Military, Veterans, Boys & Girls Club, The Alaska Raceway Park and many more.

Known by mushers and fans of The Last Great Race as “Idita-ROD” he annually presented a new RAM truck to the winner, and on top of that sponsored the race at the Principal Partner level.  He also underwrote the creation of the Joe Redington, Sr. trophy. Rod was also given the “Big Heart of Anchorage” award from the Downtown Partnership. He was active in the Republican party and even enjoyed a BBQ with President George W. Bush at his ranch in Texas.

A Memorial Service will be held at The Anchorage Baptist Temple at pm on Saturday, February 4. 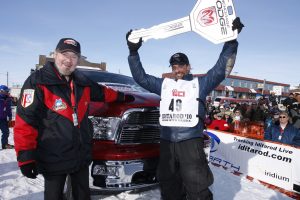 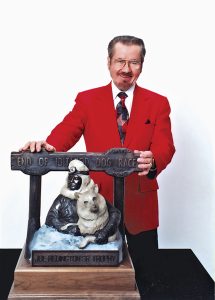