Support for the red lantern

There was a good sized crowd of people to cheer in this year’s red lantern winner, Victoria Hardwick of Bethel. Three Bethel mushers finished the race this year, Peter Kaiser who won the race, Jessica Klejka who finished in 31st place, and Victoria Hardwick who finished in 39th place and won the red lantern award. Many mushers who raced with Victoria along the way were there to greet her and cheer her into the finish line, and she received hugs from most of them. Her dogs looked great, she paused to pose for a picture with her leaders and the dogs behind her were still raring to go! 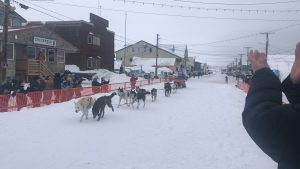 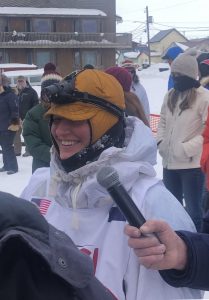 Victoria Interviewed at the Finish Line

And with that the 2019 Iditarod is over – there will be a red lantern award banquet tonight at the Nome HQ, where the mushers who finished too late to make the banquet Sunday night will have a chance to speak and thank sponsors and share stories from the trail.