Eye on the Trail: Lunch Trio in Nome

Early afternoon on Friday brought three more mushers to the finish line in Nome.  Larry Daugherty was the first to make the climb to Front Street followed by Patrick Beall and Lisbet Norris. 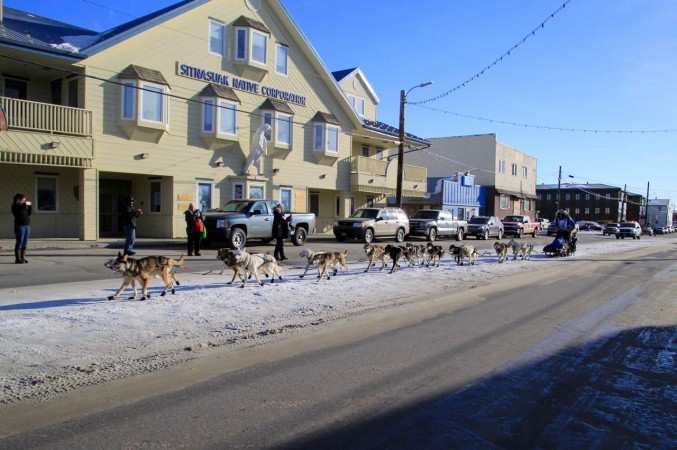 The first word Larry Daugherty heard after he set his snow hook under the burled arch was DADDY!  His wife and children were there to meet him.  To say the kids were excited to see their dad would be under statement and from their perspective it would be safe to say he’s HERO DAD. 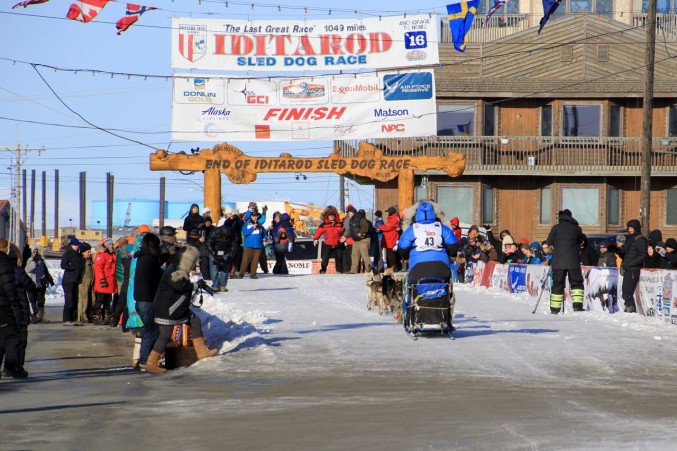 Bib 43, Larry Daugherty at the arch

Race Director Mark Nordman also welcomed Larry saying, “You’ve run the longest Iditarod with the most dogs.”  He was referring to Larry being one of the “Lost Boys” after the first night of the race.  Larry and Patrick Beall took a route out of Skwentna that actually had them heading into the wilderness back toward Willow.  Save for his own GPS, it would be difficult to know exactly how many miles he ran with his extra day on the trail.  At the finish, Larry said his race didn’t exactly go as he had planned but if was unbelievable.  He said it was really blowing in the blow hole, which it traditionally does, and that experience was unbelievable too.  Nome Mayor Richard Beneville “officially” greeted Daugherty saying, “You look wonderful, and look at those dogs!”  Larry finished the race with fifteen very happy energetic dogs in 63rd place with a time of 11 days, 21 hours and 16 minutes.  He has earned his Iditarod Finisher’s Belt Buckle and it all started with his grandmother’s obsession for The Last Great Race®. 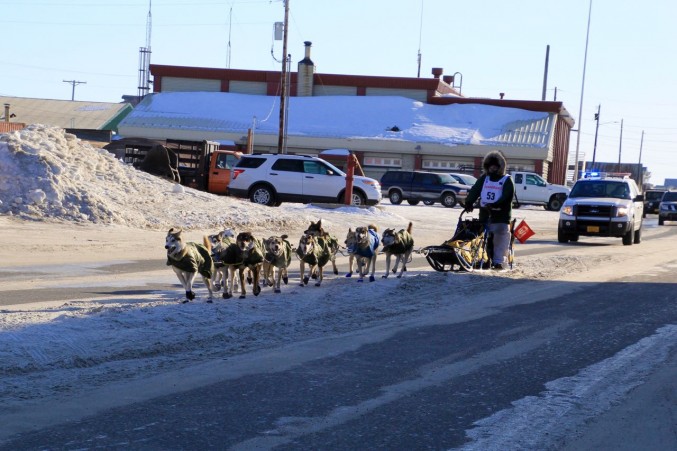 Patrick Beall followed Larry down Front Street to the arch.  With eleven dogs in harness, Patrick earned 64th place with a time of 11 days, 21 hours and 25 minutes.  Beall has worked with both Mitch and Dallas Seavey learning dogs and the sport of mushing.  Mitch was at the finish to congratulate Patrick.  Beall grew up in Oklahoma and graduated from the university of Oklahoma with a degree in Environmental Science.  He came to Alaska to work at a lodge in Bettles and was introduced to sled dogs when he took care of ten Alaskan Huskies.  He moved to Sterling to work with Mitch Seavey.

Patrick was the second “Lost Boy” and did who knows how many extra miles in completing his race.  That must have been quite the experience, one that will fuel stories for years and years to come.

At the finish Patrick was greeted and congratulated by the Mayor of Nome on completing the race and earning the coveted Iditarod Finisher’s Belt Buckle.  Patrick said there are no words to describe what its like mushing a team of dogs across Alaska.  He did say things like overwhelming, exciting, unique, unbelievable and to sum it all up he said, “It’s as good as it gets.”  He praised the young Seavey dogs saying they were incredible and hard working. 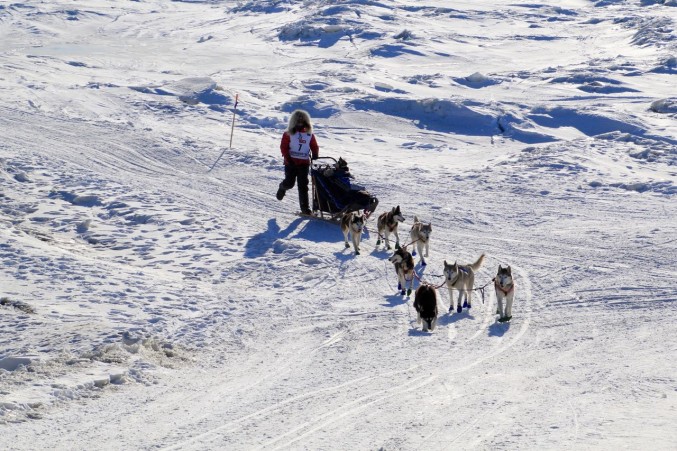 Norris and Siberians off the Bering Sea into Nome

To round out the trio of early afternoon arrivals on Friday, Lisbet Norris arrived in 65th place.  Norris runs a team of Siberians Huskies.  They are beautiful dogs.  The Norris family maintains the oldest Siberian Husky kennel in the world, Alaska Kennel.  Lisbet ran a team of AKC registered Siberian Huskies in the 2016 race as she’s done in previous races – 2014 and 2015.  Norris established a new personal best time of 11 days, 21 hours and 43 minutes with this Iditarod.

Lisbet said the run was challenging with only two veterans and the rest rookies.  She had to depend on Ripp to take over as leader for his sister Ruby.   Ruby, Lisbet’s trusted and true leader stayed home with a shoulder injury sustained during training.  Ripp was the VIP dog of the Norris team this race.  A surprise for Lisbet was how nine year old Vinnie learned how to be a leader.  Yes it’s true, old dogs do learn new tricks.

Lisbet has a degree in Northern Studies from the University of Alaska – Fairbanks.  She’s studied in Norway and Baffin Island and has worked as a musher and expedition guide.  She’s done some of her training for long distance mushing in Norway.  Distance mushing combines what she loves most, time in nature and time with dogs.  Norris returned to the family kennel from Norway five years ago knowing that dog life was the life for her.