Eye on the Trail – Finishers Celebrate by Terrie Hanke

Doors opened for the Finisher’s Banquet of Iditarod XLI at 1500, (actually now that the race is over we can go back to civilian time 3:00 pm). Folks filed in, claimed what they hoped would be a good seat then anticipated an outstanding dinner served by the Millennium of Anchorage. Mushers, fans, family and friends came away from the buffet lines with plates of fruit, lettuce salad, cheese, steamed vegetables, mashed potatoes, rice, shrimp, halibut and prime rib. Desserts were delicious but too numerous to mention.  Here’s a list of the special awards presented and the recipient..

All of the mushers were off the trail prior to the Finisher’s banquet. The Widow’s Lamp had been extinguished. The 41st Last Great Race of 2013 is in the record books. Teams are airborne for home.   Mushers are considering new, perhaps untried strategies for the 42nd Iditarod. To sum up this race and how all Iditarod Races are unique, here’s a quote from Jodi Bailey as she finished in Nome, “It’s the same red line on the map with different weather and luck.” 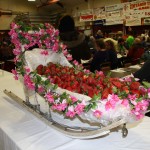 Strawberries served in a Sled 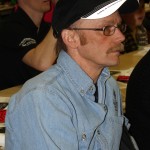 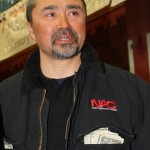