Are You Ready for an Ultimate Iditarod Experience? 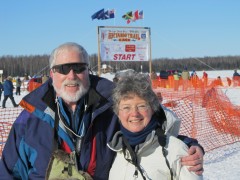 Ed Ward purchased the adventure of a life time.  Will you be the next to join us on an Ultimate Adventure?

The Ultimate Experience is an opportunity to take the IditarRider experience to the next level for a memorable  adventure by heading out for an overnight at Rainy Pass Checkpoint after participating in an 11 mile IditaRider experience at the start of the race.

We can tell you more about this opportunity , but better yet, meet Ed Ward and find out what he had to say!

The Ultimate Experience By Ed Ward

I wouldn’t have thought that the Iditarod “Ultimate Experience” could possibly be an understatement.  Then I tried it.

Now, months later, still organizing the hundreds of photos and the hours of video, it’s the memories that aren’t captured in pictures and videos that are the hardest to sort out.  Most of them involve the people we met.

The pictures capture the dramatic beauty of the land, starting with the prolonged sunset of a westbound flight to Anchorage over the mountains, with pink light giving way to blue shadows, the dramatic contrast of the sea meeting the mountains at Anchorage, the views from a bush plane that put the “wild” in wilderness, and the intense, clear blue of the sky that immediately makes everyone assume your pictures are Photoshopped.  Can’t be helped.

But it’s the glimpses into the people, beneath what the camera can see, that are the most memorable.  Coincidentally, two of the most vivid memories involve Lance Mackey.

One was when my wife and I, as part of the Ultimate Experience, had our photo taken with all the mushers after their official group photograph.  We watched them being patiently posed, and then we were called forward to join them, champagne flutes in hand.  Two in the center of the group shot graciously scooted over so we could take their chairs, and others adjusted to other seats or the floor to make room.

After the shot, the group was released from their pose, and suddenly we were in the middle of a milling mass of Iditarod mushers, many of whom I had been following on the Web and on documentaries for years.  There were familiar faces all around, and all chatting easily with each other and with us.

Then my wife tapped my shoulder and said, “There’s someone here who’s waiting to speak to you.”  I turned to face Lance Mackey, winner of the previous four consecutive Iditarods.  It took a moment to process:  he was waiting patiently to talk to me.

Then he extended his hand and thanked me for my support of the race.  I get to have my picture taken and have real conversations with a crowd entirely composed of my Iditarod heroes, and one of them is thanking me.

It was a theme that I heard a number of mushers express to many of us Iditaphiles, who were assembled for the race.  In the following banquets and meetings, I would hear mushers warmly thanking Iditariders, volunteers, and auction bidders for their support of the sport that means so much to them.

Another surreal moment was when I was the “official checker” for the first 5 teams into the Rainy Pass checkpoint.  Linda, the head checker, casually reviewed the essential steps with me:  get the musher’s name and bib number, log the official time in, and get the musher’s signature.  How hard can that be?

Then a small, Jiminy Cricket voice reminds me that the mushers have spent months – sometimes years – of time, effort, and money to reach this checkpoint on this day.  The voice within says, “Don’t screw it up.  Don’t cost them all of that, just because you didn’t do this right.”

The first team pops out of the trees at the other end of the lake, gliding silently and apparently effortlessly toward the checkpoint.  My checkpoint.  The voice is now resounding:  “Name, bib number, time, signature.  Don’t screw it up.”

I can hear the swoosh of the runners over the snow as the sled rushes up to the checkpoint, where I stand with my clipboard and official check-in sheet.  “Remember:  name, bib number, time, signature.”

Abruptly, the sled stops, and the musher brushes back his fur-trimmed hood.  Suddenly, I’m staring into the unmistakable face of Lance Mackey, the man whose hand I had shaken as he thanked me for my support, and whose autographed book I have read a couple of times.

A bullhorn in my head is now screaming, “Don’t screw up!”

He looks at me and nods slightly, apparently recognizing me.  My big moment.  All I can hear in my head is “Name, bib, time, signature.”  I manage to look in Lance’s face and stammer, “Name?”

For a second, he stares at me, apparently looking for some sign that I’m joking. Another long second passes.  And another.  It seems forever.  Then he breaks into that trademarked easy smile and says “Mackey.”

All the other check-ins were just as exciting, but considerably less intimidating.  The voice within was finally still.

This is just one story of the hundreds I lived in person with the world’s friendliest people – the volunteers and participants of the Iditarod.   If you are a fan of the Iditarod, you must try this adventure if you can.  There is nothing like it anywhere for a fan of dogs, mushers, dogsledding, the outdoors, and the Iditarod.

Be the next to have the Ultimate Experience and share your adventure with other race fans!

Here is what you get with the Ultimate Iditarod Experience:

On Thursday before the start of the race, you’ll enjoy a casual meeting over lunch while the mushers are on break from their Musher Meeting.  Your will have your picture taken with all of the current field of mushers after they toast the Iditarod after their meeting at  the Millennium Hotel Alaska.   That evening, you will two tickets for the Musher Drawing Banquet and be seated at one of the head tables.

You will receive complementary tickets for two to the Iditarod Speaker event on Friday at the Millennium.

Saturday morning, you’ll cut the ribbon at the Race Start ceremony.  You will also have the opportunity to spend time in the secured staging area to take photographs and watch mushers prepare their teams line up for departure.   Before you know it, you’ll hear your name announced with your musher of choice as you pull up to the infamous Iditarod Race Start Line!

Sunday you will be flown to the highest checkpoint on the Iditarod Trail for a two night stay in Rainy Pass Lodge.  While there, you will be the “Official Checker” to sign in the first 5 mushers who come into the checkpoint.  Who will those 5 mushers be?

On Tuesday, you will be flown back to Anchorage to end your adventure.

Learn more about the Ultimate Experience at this link or by sending an email for more information.