Do many Siberian Huskies run the Iditarod? If not, why? 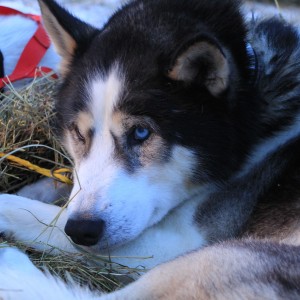 Siberian Huskies are the classic “sled dog” that most people envision when they think of sled dog teams, and that vision is often reinforced by Hollywood in movies and television shows. That image is so pervasive, that many people are taken aback when they first see the diverse collection of sizes, coat colors, and bodily features present in today’s competitive sled dogs. Although Siberian Husky genes can be found in most sled dogs running today, very few purebred Siberian Huskies are used on Iditarod teams.

So why is that? To answer that question, we need to look at the qualities that make for a successful sled dog in a long-distance race like the Iditarod. The key components that mushers look for when developing their teams are speed, endurance, attitude, and the capability for the dog to handle the extreme weather conditions that are present in Alaska in the winter. Siberian Huskies have all of these attributes but compared to other sled dogs that have been specifically bred for these features, they don’t excel in all of these components. In particular, different breeds have been bred into sled dogs over the past several decades in an attempt to improve the speed component, while maintaining the endurance, attitude, and hardiness components. 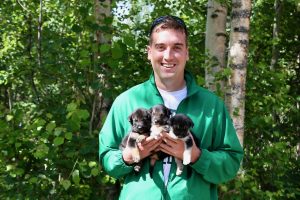 21st Iditarod Teacher on the Trail™, Brian Hickox, has his hands full with Redington Puppies

Purebred breeds, such as the Siberian Husky, must maintain the characteristics of the breed standard that has been established for them, and it is this aspect, rather than the attributes of a superior racing dog, that are genetically favored in the breeding of a Siberian. In short, how a purebred look is more important than how it performs the job it was historically bred for.

Compare this to the breeding programs that most mushers use to develop their dog teams. Over the years, various breeds have been bred into the arctic breeds to select for speed and endurance, such as hounds, pointers, and shepherds. And, without the constraint of having to breed for appearance, mushers are free to select the best performing sled dogs among their clan for breeding, thereby selecting for favored racing attributes with each successive generation. Successful mushers can also sell breeding dogs or puppies for a premium, which also extends the genetic reach of these superior canine athletes. Sled dogs with a Seavey or Redington pedigree, for example, are often sought after by mushers looking to enhance their team genetics.

Although not recognized as a breed by the American Kennel Club, most sled dogs found in the Iditarod and other modern sled dog races are characterized as Alaskan Sled Dogs, or Alaskan Huskies, and have been shown through DNA studies to share a common genetic core that has been established through many generations of breeding for racing rather than for appearance. 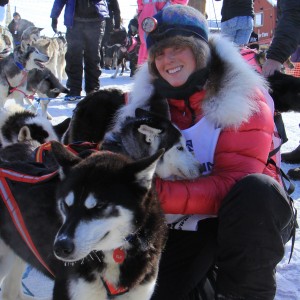 That’s not to say that Siberian Huskies don’t have a place in the Iditarod or other sled dog races. Indeed, there are some mushers, both competitive and recreational, that maintain teams that consist exclusively of Siberians. In recent years, both Rob Cooke and Lisbet Norris have run their Siberian-exclusive teams in the Iditarod. And while they may not be the first to cross the finish line in Nome, the majestic image projected by these beautiful dogs as they pull their sleds through the Alaska wilderness continue to provide inspiration to all that witness them.

Disclaimer: The Content is not intended to be a substitute for professional veterinary medical advice, diagnosis, or treatment. Always seek the advice of your veterinarian with any questions you may have regarding a medical condition for your pet.