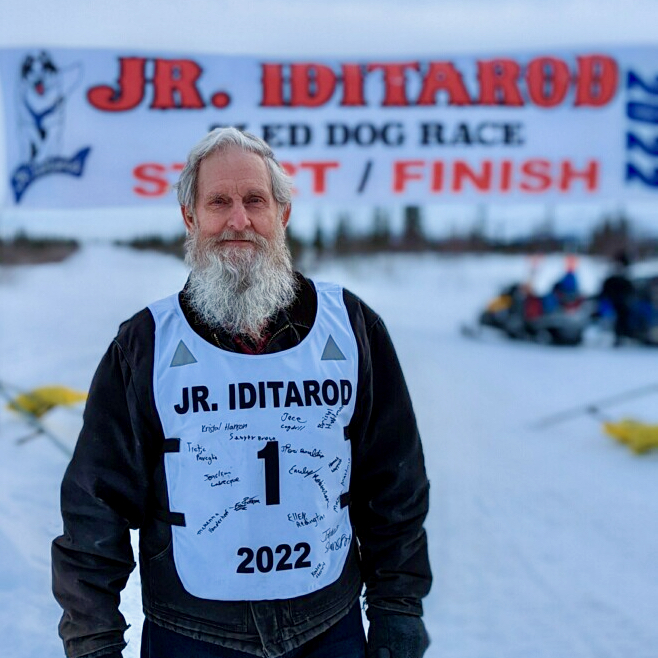 The Jr. Iditarod Board has named Bob Morgan as the Honorary musher for the 45th running of the race.  The mushers will sign bib #1 and present it to Bob in recognition of his service to the race and support of young mushers.  Bob will be at the start at Cantwell and at the finish wearing Bib #1 and sporting his very white bushy beard that makes him look remarkably like Santa Claus.

Bob, a musher himself, has competed in Iditarod and finished in 1994.  He knows the importance of mentoring young mushers.  Young mushers are the foundation for growing the sport and creating more and more participants to carry mushing into the future.  Over the years he’s helped many young aspiring mushers and continues to help kids through his volunteer work with the Jr Iditarod.

One year, the son of a close friend used part of Bob’s Iditarod team for the Jr. Iditarod.  Bob also tells a story about seeing a young girl out on the trail as he drove to work every day.  Seemed that more often than not, she was stopped lining out her dogs.  Bob was quick to diagnose the problem – she didn’t have a dependable leader.  One day Bob stopped and offered the young musher a leader.  He leant her an old, but dependable trapline leader from his kennel.  The dog wasn’t fast but was very solid at the front of the team.  The girl loved the dog and from then on her team stayed lined out, her training runs went well and she went on to participate in Jr. Iditarod for three years.

For more than 25 years Bob has been supporting the Jr. Iditarod with his time and numerous talents.  He’s the kind of person that sees things that need to be done, figures the best way to accomplish the task and then gets it done.  He’s resourceful and innovative, a jack of all trades  and he’s always happy to lend a hand.  He’s a guy you want on your team.

Before satellite phones and internet, race standings and dog traffic were reported thru HAM or amateur radio.  When Bob became licensed as a HAM operator he volunteered for Jr. Iditarod communications at the half-way point, Yentna Station Roadhouse.  When amateur radio took the backseat to internet, Bob was still part of the communications crew out at Yentna running information between the timer/starter who was outside and the computer operator inside.

As the starter/timer I’ve had the pleasure of working with Bob at Yentna for many years.  It made no difference how late at night or early in the morning or how cold it was, Bob collected the data and delivered it for posting.  His efficiency made the data reporting go not just smoothly but flawlessly.

Bob began working with the race in the mid 90’s.  From then to now, the biggest change he’s seen is how technology has affected the race.  It used to be that the kids were on the trail following the markers and finding their way.  Race officials were always available on snowmachines but the kids were out there on their own.  Now days, they have GPS and cell phones not to mention trackers.  The trackers tell race officials and spectators exactly where the mushers are 24/7.  Are they resting or running, how fast are they moving, what’s their average speed, are they on the trail or off the trail – the tracker tells all.

Every year Bob makes a special trip up to Willow to collect drop bags from the Jr. Iditarod  mushers who are participating in the Willow Jr. 100 race, taking them to the drop bag collection site for the Jr. Iditarod.  This kind deed, typical of Bob, saves parents many miles of travel.

Liking the motorized sled as much as the dog sled, Bob has helped trail boss, Richard Plack, with trail work for the Jr. Iditarod.  This year with the race in Cantwell, Bob again assisted with trail work and hauled supplies up from Knik.

Barb Redington who has worked for many years with Bob and has also served on the Jr. Iditarod Board of Directors with him says, “It’s fun to work with people like Bob.  He sees what needs to be done and does it.  He’s always available to help, like plowing the parking area on Knik Lake for the start.  Volunteers like Bob are the basis for a race like this.  It’s nice to work with great people who are dedicated.  He’s there at the Jr. Iditarod because he loves it.”  Bob has served on the Jr. Iditarod Board for seven years.

Bob has seen many Jr. Iditarod races and having had his own team, he knows what it takes for young mushers to succeed.  He says, “The kids are pretty good, they are tougher than you think.  There’s really a great bunch of kids out there.  They train their dogs, they train themselves and they take good care of their dogs.  The don’t get the recognition they should.”