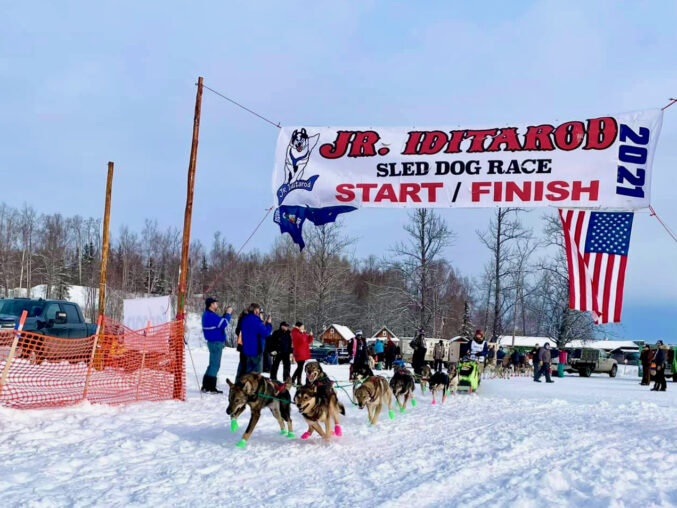 A half-dozen veteran mushers are part of the 15 musher field  for the 45th Jr. Iditarod.  These veterans combine for seven years of Jr. Iditarod experience.  Morgan Martins will defend his 2021 Championship and 2021 special award winners, James Shawcroft and Kristal Hanson also return for the 150 mile race.

The Jr. Iditarod, just like the Iditarod began as a dream.  It was Joe Redington who dreamed of a long distance race across Alaska to bring recognition to the Historic Iditarod Trail and to bring the sled dog population back to Alaska as more and more folks purchased snowmachines.  Eric Beeman dreamed of a distance race for young mushers to help prepare them for the “Big Iditarod.”  Beeman shared his dream with his young mushing friends while on a winter camping trips with their dogs.  As the young mushers sat around the campfire listening to Eric’s idea of a junior sized Iditarod, the concept grew in their minds and took on energy.  Five years after the inaugural Iditarod, the juniors had their own Iditarod.

Morgan Martins, a 15 year old musher from northern Wisconsin is the defending Jr. Iditarod Champion.  In doing the Jr. Iditarod, Morgan follows in a sibling’s sled tracks.  He and his sister, Talia who ran the Jr. Iditarod in 2018, share in the care and training of their twenty huskies and four horses.  Born into a mushing family, Morgan has been on the runners since a very young age.  At home Morgan is active in 4-H, and enjoys woodworking, riding horses, camping and hunting.  At school he participates in basketball, baseball, track, cross-country, band and choir.  Martins has run the Jr. Beargrease, the Apostle Island Sled Dog Race, Northern Pines Race and the Gunflint Mail Run.  Morgan appreciates working with Iditarod veteran and Beargrease Champion, Ryan Redington. He’s very involved in training with Ryan and will again be running a team of Ryan’s dogs for Jr Iditarod.

2021 runner-up Kristal Hanson is back for her third Jr. Iditarod run.  Kristal earned 4th place as a rookie in 2020.  Mushing in general and Jr. Iditarod specifically is a family affair for the Hansons.  Between Kristal, her father and her aunts, they have run the Jr. Iditarod 13 times.  Kristal received the prestigious Humanitarian award for outstanding dog care in the 2021 Jr. Iditarod.  She’s a senior at West Anchorage High School, participating in the International Baccalaureate Degree Program and  Spanish Immersion Program.  She also enjoys World Affairs Club.  Kristal plans to go to college.  She’s a veteran of the Willow Jr. 100 – winning gold in 2021 and placing 3rd 2022.  Her goal is to run the Knik 200 in 2023.  Kristal is running dogs from Jason and Melissa (Owens) Stuart’s Owl Creek Kennel.

Hannah Wappett of Fairbanks, age 15, returns for her second Jr. Iditarod after claiming 4th place as a rookie in 2021.   Hannah began mushing with her older siblings and parents when she was five.  Older brother Chandler ran Jr. Iditarod in 2016, 17 and 18.  Hannah is a veteran of several sprint races and will have four Willow Jr. 100 runs under her belt by the time Jr. Iditarod rolls around.  The Wappett family has raised and trained several litters of husky puppies.  Almost all the dogs on her race team have come out of those litters.  Wappett is an avid cross-country runner, cross-country skier and not surprisingly enjoys skijoring with her dogs.  She likes soccer, raising rabbits and traveling.  After high school, Hannah wants to pursue a career in veterinary medicine and plans to continue mushing.

Jace Cogdill of Willow, age 15, returns for his second Jr. Iditarod after claiming 6th place as a rookie in 2021.  Jace started mushing when he was nine years old.  The short version is he was curious and got the opportunity.  More specifically, he sawed his way into mushing.  Jace and his father were cutting wood on a neighbor’s property and that neighbor happened to have a recreational mushing team.  The neighbor invited Jace to experience life on the runners behind a dog team.  He was hooked!  Before moving to Alaska seven years ago, the family lived in Wyoming and Idaho.  He’s homeschooled and calls himself an outdoor guy.  He likes hunting, trapping and fishing and enjoys being out on snowmachine and bike.  Cogdill has worked with Iditarod Veteran Linwood Fiedler at Wayfinder Kennel.  Jace is a veteran of the Willow Jr. 100 Sled Dog Race.  When he completes high school, he plans to go to trade school and will continue mushing.

With a 7th place finish in 2021, Ellen Redington returns for her second Jr. Iditarod.  Ellen, 15, is a sophomore at Redington High School.  The school is named after her great-grandfather Iditarod veteran and race founder Joe Redington Sr.  Ellen’s parents, Julia (Flodin) and Ray Redington have both run the Jr. Iditarod.  They actually met while competing in the 1991 Jr. Iditarod.  Ellen has been around the sport of mushing and Iditarod for her whole life.  The total number of Iditarod races for previous generations of the Flodin and Redington families is 68 (and counting).  Ellen’s Jr. Iditarod family tree includes her parents Julia and Ray, her grandmother Barb Redington and several uncles on both sides of the family.  Her uncles, Dan Flodin and Ryan Redington are both Jr. Iditarod Champions.  In her spare time Ellen enjoys art, hunting and travel.  She participates in Art Club and Educators Rising.  She is a veteran of the Willow Jr. 100.  After high school, Ellen plans to attend college.

2021 Sportsmanship Award winner, James Shawcroft, returns for his second Jr. Iditarod run.  James claimed 8th place as a rookie.  In that run he received the Sportsmanship Award from his fellow competitors.  James loves to chat and tell stories.  Through that he keeps everyone’s spirits up.  As the wind piled the newly fallen snow into serious drifts across the trail, James stopped his team, put his snowshoes on and helped break through the drifts.  His tireless energy and everlasting smile made a tough trail passable.  James, 15, a sophomore at Lathrup High School in Fairbanks, has been mushing since he was six.  Neighbors introduced the Shawcrofts to mushing and now the family has their own team.  James follows his sister Emma (2017 & 18) to the Jr. Iditarod.  He placed 9th in the Willow Jr. 100 this year.  James enjoys E-sports, hunting and camping.  While he’s not decided on a career path, he looks forward to attending college and plans to mush until he graduates from high school.

The Jr. Iditarod has been moved up the Parks Highway to Cantwell.  Abundant snow and warm temperatures have combined to create copious amounts of overflow on the trails to and from Yentna Station.  The 2022 Jr. Iditarod will be a stage race.  Mushers will do a sixty mile run on Saturday out and back on the Denali Highway then do another 60 mile out and back run on Sunday.  The times for each day will be combined.  Saturday’s stage will start at 10:00 am while Sunday’s stage will start at 9:00 am.  The finisher’s banquet will be held at the Cantwell school on Sunday evening. Race tracking and updates can be found at www.jriditarod.comthroughout the weekend.  Come back soon to meet more of the Jr. Iditarod contestants.