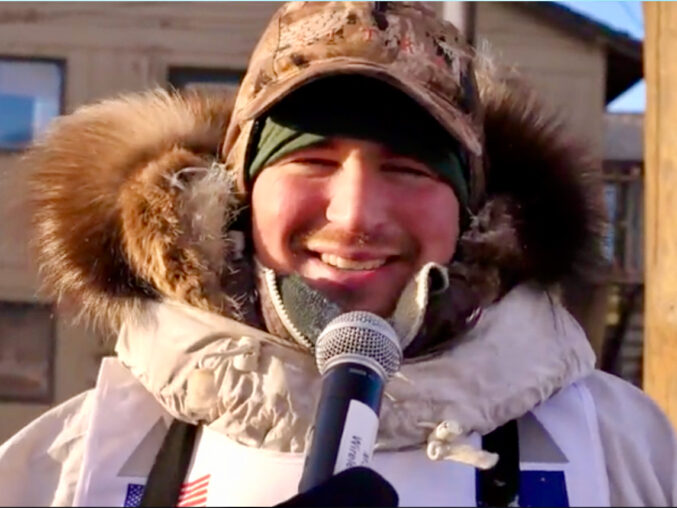 Riley Dyche was undoubtedly glad to see Front Street and the Burled Arch of Nome.  He’s proof that patience is a virtue.  Riley persevered through the winds of Topkok and made it to the Nome Kennel Club shelter cabin  at mile 926.  He stayed at the cabin for well more than 24-hours until the wind died down.  When he heard it break, he made his break for Nome.

Riley gives all the credit to his two little leaders.  They weren’t confused by all the stop and go they experienced during the wind.  They, with Riley’s help kept moving forward through the impossible wind, slick icy trail and sidehill slopes.  Riley says they got him through the storm and they were likely the difference in him making it while others didn’t.

He couldn’t be prouder of the pair of 40 pound females at the front of his team.  He said that Pip is a spunky little dog who’s likes to jump around and that’s exactly what she was doing at the finish line.  Out in the wind when the team was regrouping, she’d jump, get tossed sideways or backwards, then get up and jump some more.  She seemed to think it was a game she was playing with Mother Nature.

Riley said about the whole experience, “It was the hardest thing I’ve ever done and definitely the hardest mushing.  Without my leaders, I wouldn’t have made it.”

Riley was joined by Jeff and KattiJo Deeter as well as Sebastien Dos Santo Borges at the shelter cabin.   Riley said there were about 30 dogs inside the cabin.  He called it a giant dog party.   The humans were far outnumbered by the dogs.  The Kennel Club cabin has electricity, so for Riley who lives in a dry cabin, this was on the plush side nice.  He added a quick thank you to the Nome Kennel Club.

Riley grew up in Iowa and while attending college in Colorado, he began his mushing career as a tour guide. He moved to Alaska to work for Icefield Expeditions where he became acquainted with Matt Hall and took a job handling for Matt.  He’s also worked for Ryne Olson and Sven Haltman.  Riley started Dark Horse Racing Kennel in 2016.

Riley says that his athletes are all raised by him from puppy hood. He believes that every dog, regardless of size, build, etc. has the potential to excel if given enough time and commitment.   He’s built Dark Horse Kennel around the philosophy of keeping my dogs exceptionally happy.  That surely paid off with Pip out there in the wind!

Riley races to support research for a cure for ALS as well as care and support for those experiencing the disease.