Eye on the Trail: Iditarod LI 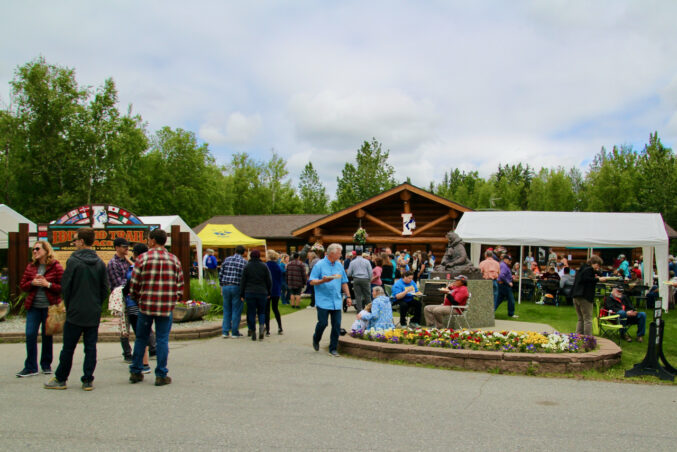 The first few sentences of the 51st Chapter of the book of Iditarod were written on Saturday June 25th at the Musher Sign-up and Volunteer Picnic.  It’s a gala annual event held the final Saturday of June to thank the throng of volunteers who make the race happen and welcome mushers as they commit to running a race that’s some 250 days and many miles of training down the road.

The spirit of Joe Redington, SR. is ever present as the bronze bust of the Father of the Iditarod stands prominently for all to pass by as they exit the parking lot and head to the log building that serves as Iditarod Headquarters.  Sun/rain shelters are spread around the lawn with tables and chairs awaiting.  It’s a time when the Iditarod nation gathers to celebrate the past and speculate about the future of The Last Great Race. 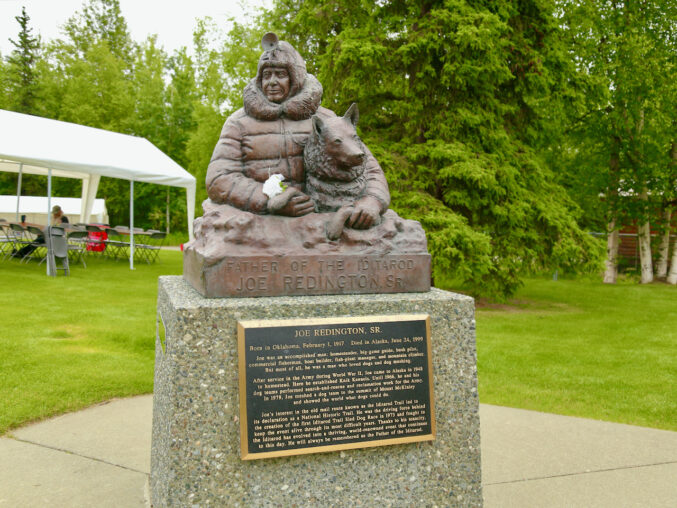 Late in the afternoon as festivities on sign-up and picnic day draw to a close, there is a moment all look forward to, THE DRAWINGS.  Useful items like bowls and booties are awarded to mushers drawn randomly from those who signed up.  Then the moment all have waited for – the awarding of entry fees to two lucky mushers.  With the registration fee set at $4,000, winning a free entry is a HUGE gift and likely great karma for the upcoming race.

Twenty-one mushers are on the board for the 2023 Iditarod as of picnic day.  Reigning champion Brent Sass is returning to defend his championship.  As of now, he’s the only champion on the 2023 roster.

Looking a little closer at these contenders, Jessie Holmes of Brushkana, Alaska is a five race Iditarod veteran running consecutively since 2018 when he finished in 7th to claim Rookie of the Year.  He has a ninth place finish in 2020 and he broke into the top five in 2022 with third place.

Dan Kaduce of Chatanika, Alaska earned rookie of the year in 2010 with 21st place.  Out of his four runs to Nome, fourth place in 2022 was his first top ten finish.  Vets honored Kaduce in 2022 with the Leonhard Seppala Humanitarian Award.

Richie Diehl of Aniak, Alaska is a nine race Iditarod veteran.  Sixth place in 2022 and 2018 are his best Iditarod finishes.  His one other top ten came in 2021 with 9th place.   Richie has been steadily climbing the ladder into the top ten since his second race in 2014 when he finished in 14th followed by 12th in 2016 and 11th in 2019.  Richie has been honored with the Herbie Nayokpuk Award and in 2014 with an improvement of 22 places over his previous race Diehl was recognized as the Most Improved Musher.

“If at first you don’t succeed, try, try again,” is an adage embraced by many, including second year rookies Bridgett Watkins and KattiJo Deeter. Bridgett and KattiJo, two of the six mushers that scratched from the 2022 Iditarod in the last 77 miles of the race due to the infamous blow hole storm, are back  this year to take care of unfinished business.

Of the twenty-one entrants for the 51st Iditarod, nineteen call Alaska home.  Rookie Jay Foucher lives in Wentworth, New Hampshire and will be running a team of mostly Siberian Huskies along with a few Alaskan Huskies and Alaskan/Siberian crosses.  Veteran Mille Porsild lives in Alaska but identifies her home as Denmark.  Porsild was Rookie of the Year in 2020 and claimed 5th place in 2021 also receiving the Leonhard Seppala Humanitarian Award.

The trend of veterans versus rookies runs heavy toward veterans with 16 experienced teams returning to the race joined by five rookies.  Likewise males over females with 15 males and 6 females.

Stay tuned as signup continues through November 30th.  Lots of time for former champions Peter Kaiser, Thomas Waerner, Mitch Seavey and Martin Buser to join the 2023 contest.  Dallas Seavey and Joar Leifseth Ulsom have announced they plan to put their Iditarod careers on snooze for the immediate future.  Also plenty of time for more rookies and your favorite veterans to join the contest.

To put a wrap on this story, we need a druuuuuuuuuuuuum roooollllllll, please!  The moment we’ve been waiting for.  Which mushers will have their entry fee returned?  Congratulations to Kristy Berington and Travis Beals!

Kristy, her twin sister Anna and Kristy’s husband Andy Pohl operate Seeing Double Sled Dog Racing out of Knik, Alaska.  Kristy began her Iditarod racing career in 2010 and has been a contestant every year since then.  Her best finish came in 2019 when she made the burled arch in Nome in 16th place.  Anna joined Kristy for the annual Iditarod trek in 2012.  Most often the twins run together and finish in consecutive places.  In 2019, Anna followed Kristy to the finish in 17th place.  Andy is also an Iditarod veteran, finishing his rookie run in 2018.

Travis and his partner Sarah Stokey operate Turning Heads Kennel in Seward along with a tour business. Travis and Sarah are both Iditarod veterans.  Beals made his rookie run to Nome in 2013 and claimed 37th place.  In 2015 with an 11th place finish, he was recognized as the Most Improved Musher besting his previous finish by 26 places.  Travis received the Sportsmanship Award in 2022.

As a very happy ending for the 2022 Iditarod, the wayward Leon is safely back with his owner Sebastien Dos Santo Borges.  Leon’s adventure began in Ruby and covered some 150 miles back to McGrath over three months time.  Local dog mushers were able to contain Leon and he has rejoined his teammates.  The final sentences of the 50th book of Iditarod were indeed happy with the news of Leon’s recovery and safe return.

Come back often to check the list of mushers for Iditarod LI and while you’re here, get to know the mushers through their biographies and by visiting their kennel webpage.