Eye on the Trail: Radano In Nome 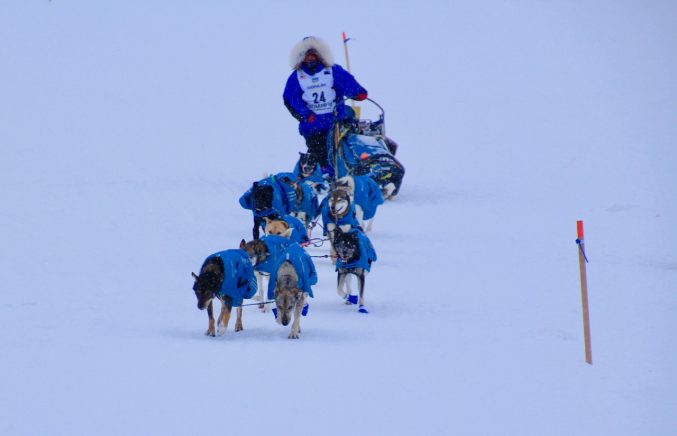 Talkeetna’s Anja Radano came into Nome this morning tight behind Jason Stewart. Anja has been a delight on the trail with her big smile and positive attitude. To the Iditarod Insiders she said, “It was really fun, lots of challenges. I’m really proud of these guys for an amazing job. I’m really proud of myself too. It was an amazing experience, I can’t even say…” Anja is another musher who was speechless about the experience across Alaska with their best canine friends.

The cook at the Idita-diner in Nome where all the Nome volunteers eat is from Talkeetna.  Taking time away from lunch preparation, she was ever so happy to see Anja at the Burled Arch.  Debski, the cook said, “She’s a wonderful member of our community and has worked hard to do this Iditarod. Talkeetna is very proud of what Anja has accomplished.”

Radano was born and raised in a small village outside of Munich, Germany. She earned her degree in nursing and worked as a nurse for ten years. After taking a vacation to Alaska in 2003 she feel in love with the open spaces and concept of dog mushing. Within a year, Anja returned to live in Alaska and began working with Iditarod Veteran, Melanie Gould. While learning to run dogs, Anja went to school to become a certified Veterinary Technician. 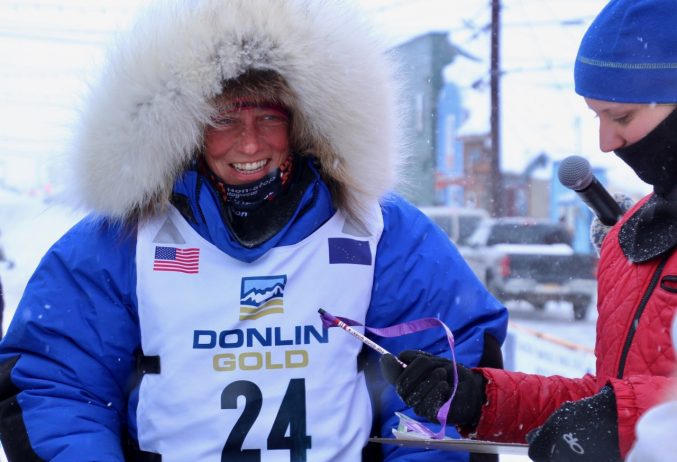 Anja Radano Signs Off the Trail with Melissa Owens as Checker

According to Anja, Talkeetna is the perfect place to train dogs. The terrain varies and offers many challenges that can prepare a musher for the demanding portions of the Iditarod trail. In 2008 Anja established her own kennel and began breeding from different bloodlines. At first Radano concentrated on mid-distance racing but Iditarod captured her heart and imagination. Soon she was planning and preparing for the marathon distance.

Anja stopped just short of the snow ramp up from the sea ice to Front Street. It appeared that she changed out leaders for the urban portion of the race. The new leader traveled trotted up the ramp that’s next to the Nome Subway. A couple of blocks down the street toward the Burled Arch, the urban leader took a sharp left toward the Polar Cub Café.  They must have caught a whiff of what was being served for lunch. A local fellow, who lives next to the café, came out to assist Team Radano back onto street. The helper was a big Santa Claus like character with a large white beard who’s been walking a Great Pyrenees around town everyday. Anja’s helper laughed and said, “There’s been many a team that’s decided to travel the sidewalk of Front Street rather than the street itself.” Folks watching from the chute were thinking the dogs wanted lunch – NOW!

As they got closer to the chute, they figured it out. Trotting smartly to the finish line that had been marked by red Kool-Aid as in the first year of the race, they waited patiently for a treat from their favorite human. After the check-in was complete and Anja had signed off the trail she guided them to the dog lot where they’d receive a gourmet meal and settle in for a nap while awaiting their flight out of Nome.

Radano was the 51st musher to cross the finish line with a time of 12 days, 20 hours and 0 minutes. Her average speed, which includes rest time, was 3.20 miles per hour. Anja doesn’t plan to run more races this winter but is looking forward to what her team can accomplish next winter.