Eye on the Trail: So much to do, So little time in Nome

It won’t be long and the festivities of the Finisher’s Banquet will get underway.  The banquet is held in the Nome Recreation Center which for the past week has been the site of the world’s largest basketball tournament.  Over night it’s been transformed into a banquet facility.

The City of Nome is one hopping place in the early part of March.  If there’s not enough to do trying to catch all of the mushers as they arrive at the Burled Arch, all hours of the day and night, there’s a list of special events that can fill all the gaps.

This week in Nome is about so much more than Iditarod.  Each day gets noticeably longer.  The sun climbs higher above the horizon.  The sun feels so much warmer.  Spring is coming and all the festivities of early March send a message to old man winter, “It’s time for you to leave.” 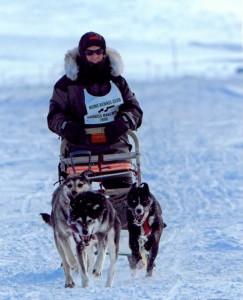 The list of Iditarod week activities in Nome is about a block long and the variety is amazing.  People can take a tour of Nome with the Mayor Richard Beneville, they can play golf on the Bering Sea or they can choose from about 100 other activities..

There was a break in the action at the Burled Arch late on Friday afternoon.  I planned ahead and signed up for the Nome Kennel Club’s Businessmans Race.  It’s a three dog, three mile sled dog race designed specifically to give non-mushers a taste of the sport.  Members of the Nome Kennel Club bring dogs and sleds to a large open hilly area behind the new hospital.  Let the fun begin.  The novice mushers are given a little coaching.  It’s just the basics like don’t let go,  gee, haw, whoa, this is the brake, this is the drag pad and a few words of advice on how to turn a corner.  When it’s time, three leaping bounding energetic sled dogs are harnessed and hooked to the gang line.  The countdown is five-seconds and you’re off.  Truthfully, there’s little to worry about going around the hilly three mile course for the novice musher.  Hang on, bend your knees and everything will be fine.  The dogs run this loop time and time again throughout the winter.  They take good care of the musher.  The dogs on my team this year were Hannah, Derringer and Longo.

If a spectator sport would be more your style then by all means get out to the Nome Recreation Center and watch some post high school basketball.  It’s exciting high paced run and gun basketball.  The Lonnie O’Conner Iditarod Basketball Classic has been billed as the largest basketball tournament in the world.  Forty plus teams from Alaska’s villages descend on Nome via airplane to play basketball for a week.  Games begin early in the morning and conclude late at night.  It’s a double elimination tournament.  I’ve watched a fair number of games in which both teams have scored over 100 points. 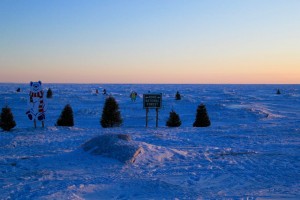 If you prefer golf, there’s the Bering Sea Golf Classic.  It’s played on the ice jumble of the Nome National Forest located on the Bering Sea.  Nome residents take Christmas trees out onto the sea ice and plant them in the snow along with wooden cut out figures.  The figures and trees serve as hazards for the golf tournament.  Grassy rugs are laid down to act as “greens.”  Players head to the first tee with a couple of clubs, most often a short iron and a putter.  Spent shotgun shells are used as tees.  Balls used by the golfers come in a rainbow of bright colors.  Standard attire has nothing to do with collared shirts, pants or skirts and spike-less golf shoes.  Standard attire for the golf classic includes parkas, snow pants, hats, mittens and bunny boots.  There was plenty of wind for the tournament this year and lots of natural hazards with all the jumble ice.  This tournament isn’t about the score, it’s about the journey  from the first tee to the ninth green.

The Old St. Joseph’s Catholic Church houses the arts and crafts fair and fine arts show.  The old church chancel is filled with artisans selling their Alaskan made wares.  It’s a tremendous opportunity to purchase native art from the person who created it.  If you con’t find the right size of seal skin slippers, fur hats or beaver mittens many artists will special make what you need.

Nome is an amazing city.  Thank you to all Nomeites for hosting the Iditarod finish and welcoming Iditarod volunteers, mushers and athletes. 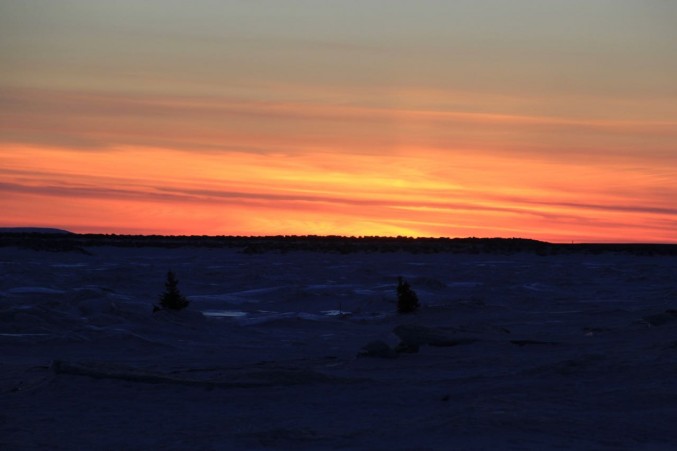 Nome sunset of the Bering Sea