Eye on the Trail: Stokey and Cooke in Nome 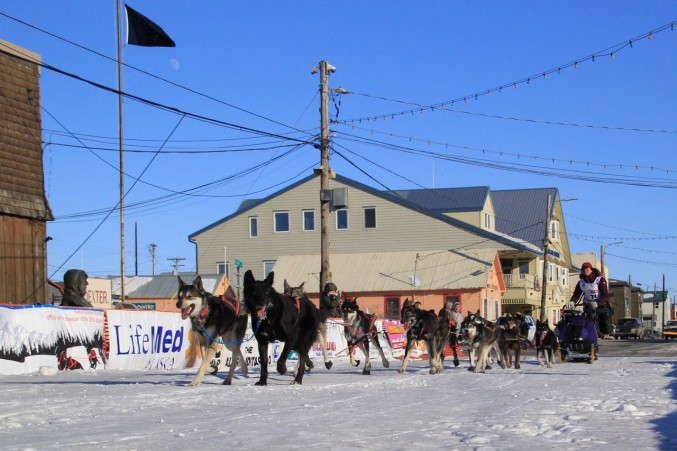 Claiming 66th place in Iditarod XLIV is Sarah Stokey.  Sarah and her fiancee, Travis Beals, operate Turning Heads Kennel near Seward, Alaska.  Sarah and Travis became engaged when Travis completed his rookie run in 2013.  He proposed and she accepted under the burled arch.

Sarah was running the kennel’s puppy team.  Her goal was to get to Nome with healthy, happy, wiser dogs.  That goal was reached Friday afternoon just before 1800 hrs.  She finished with 10 spirited dogs who looked as energetic as they did when leaving Willow twelve days ago.

Sarah and the dogs became wiser together.  They’d had plenty of practice with camping and long runs during training and qualifiers but it takes the race to bring theory to the level of practice.  Friends, family and Travis greeted Sarah.  She and the dogs had a lot of energy coming down Front Street.  With Sarah pedaling and the dogs trotting, it was a picture of unity between musher and dogs.  Sarah set the snow hook then moved through the team.  As she thanked them, she was emotional.  This was a dream that she’s carried since the age of seven, since watching the movie Iron Will.  She had dreamed her dream and with setting her snow hook in Nome today, she’s lived her dream. 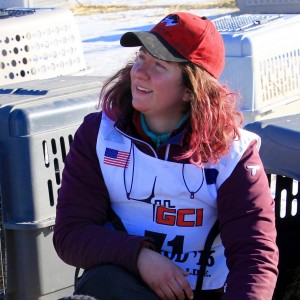 Sarah in the Dog Lot 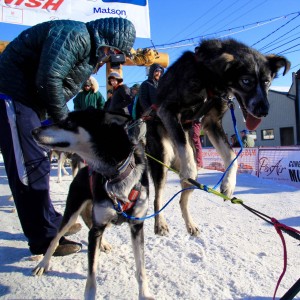 Seriously, that was a thousand miles?

When interviewed, Stokey said, “The race was a lot of fun.  There were a few down moments but they (dogs) sure are spunky now.  I learned a lot.  The last 200 miles taught me more about mushing and dogs than I’ve learned in the last 5 or 6 years.”

From a conversation back in Unalakleet, Sarah has plans for future Iditarod runs.  During the miles spent on the sled, she thought about strategies that would put her in a more competitive position in the future.  For her rookie year she was out here to learn the trail, learn the ins and outs, ups and downs of the Iditarod  In the future she intends to “race” not just enjoy the trail with the dogs.  Stokey completed the race in 12 days, 2 hours and 59 minutes.

Rob Cooke seemed to breath a sigh of relief as he stopped his team in Nome.  Cooke said it was a difficult race in a number of ways.  Over the last 24 hours, he’s wondered if they’d be finishing.  He extended his rest in White Mountain by several hours.  By the looks of their energy coming down Front Street and into the finish chute, i’s exactly what the Siberians needed and wanted.  The temperature was cool last evening, it was good Siberian weather. 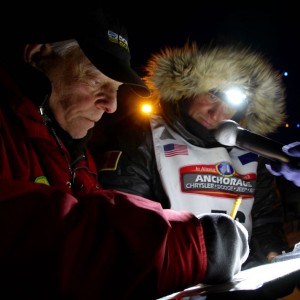 Rob signs off the Trail 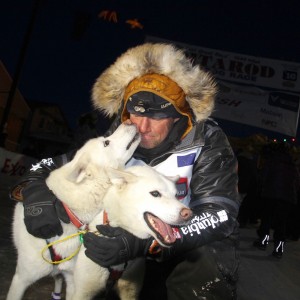 Rob with his Leaders

Rob holds a Master of Arts degree in humanities.  Before taking up mushing, he was an Aircraft Engineer in the UK Royal Navy.  Once Rob caught the sled dog bug, he and his wife moved to Canada to pursue the dream of fielding a team for the Yukon Quest.  Cooke finished his first Quest in 2013.  Next up on the list of challenges was to run the Distance Double.  Cooke completed both the Iditarod and the Yukon Quest in 2015.  What next?.  Being that the 2015 Iditarod was run out of Fairbanks rather than on the traditional trail he returned in 2016 to see the villages and checkpoints between Willow and Ruby and why not do Quest again too.  He’s completed another Distance Double in 2016.  Count them up, Rob and the Shaytaan Siberian Huskies have done five 1,000 mile races since 2013.