Eye on the Trail: Telephoto Story – Recognize These Mushers? 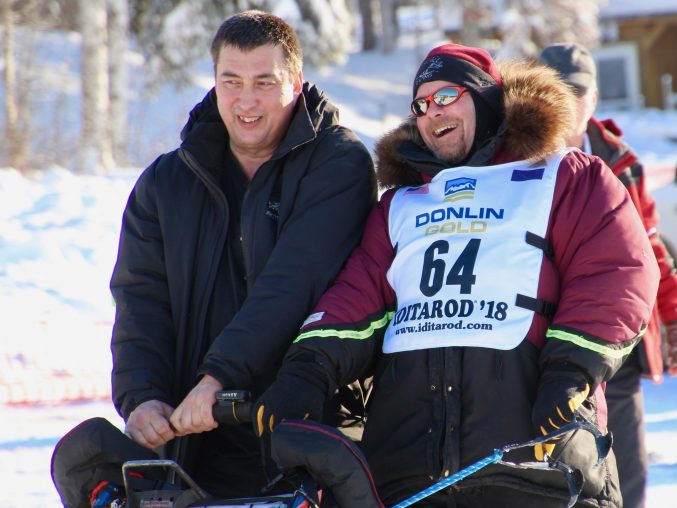 Who are these mushers enjoying the sunny restart of Iditarod 2018?

The Restart was one of the few sunny days of Iditarod XLVI.  These two fellows seem to be soaking up the sun and good vibes of the day. Who are they?  They have a great deal in common when it comes to Iditarod.

They both call the western coast of Alaska home.  This is a great advantage for training and preparing the dogs for the winds and blizzards conditions often faced in Iditarod between Unalakleet and Nome. Once they hit the coast, their teams are heading home and the dogs know it.

They both ran their first Iditarod in the mid 1990’s.  Together they have completed thirty-nine runs to Nome.  They have each finished in the top-ten multiple times and they have each received the Sportsmanship Award.  Neither of these mushers has scratched from a race.

These two mushers share at least one more commonality – finishing the race in eight days.  Since Martin Buser in 2002, there have been twenty-eight sub nine-day finishes by sixteen different mushers.  One of the two men pictured is an Iditarod Champion.

Race fans easily recognize these two familiar fellows – John Baker and Aaron Burmeister.  Deciding to sit Iditarod XLVI out for business responsibilities, Baker assisted many teams to the starting line and enjoyed much good conversation with friends he’s shared the trail with over the years.

John Baker of Kotzebue has completed twenty-two Iditarod runs.  Baker was the first Inupiaq to ever claim Iditarod Gold.  In 2011 when the race followed the southern route, Baker made Nome in 8 days, 18 hours and 46 minutes.  He broke Martin Buser’s record, 8 days 22 hours and 46 minutes, established in 2002.   Baker placed 22nd in his rookie run in 1996.  The following year he improved to 11th.  Between 1998 and 2012, John earned 13 top ten finishes including his Championship.  In all of his runs to Nome, he’s finished 23rd or better.

Well, there you have it, John Baker assisting Aaron Burmeister to the start line in 2018.