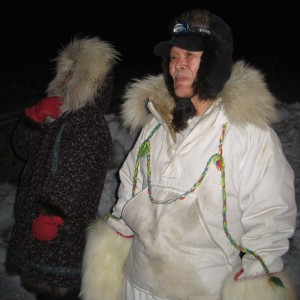 There’s much excitement surrounding Iditarod in Unalakleet.  Residents come out to welcome the first mushers into the checkpoint and they always come out to welcome John Baker.  When Sheldon Katchatag puts his traditional parka on along with his polar bear mittens and mukluks and then brings his drum tot he checkpoint to drum and sing out an Inupiaq welcome it’s a welcome John Baker very much appreciates and other spectators are fortunate to witness.  Baker, from Kotzebue was the first Inupiaq to win the Iditarod.  When it became apparent that John would earn the 2011 Iditarod crown, Sheldon flew to Nome and drummed with other Inupiaq to welcome John into the chute.  Baker arrived in Unalakleet at 0831 Monday morning.

The wind is still brisk here, blowing at 28 and gusting to near 40. The prediction is for some snow, less than an inch, rising temperatures and less wind. Amazing though is that the closer mushers get to Shaktoolik, the less wind the experience.  For the most part, Shaktoolik is always windy and threw some of the worst winds at the mushers during the 2014 race.  Aaron Burmeister, Dallas Seavey, Aliy Zirkle and Jessie Royer are out of Shaktoolik heading to Koyuk.

Mitch Seavey, Joar Leifseth Ulsom and Jeff King are resting near the Armory where the Shaktoolik Checkpoint is housed.   Out of Unalakleet and heading to Shaktoolik are Pete Kaiser, Ken Anderson and Wade Marrs.  Nicholas Petit, Jason Campeau, Nathan Schroeder and John Baker are resting on the slough at Unalakleet.  Teams will be coming in quickly this morning so there’s good chance that may change before I get to post this story. 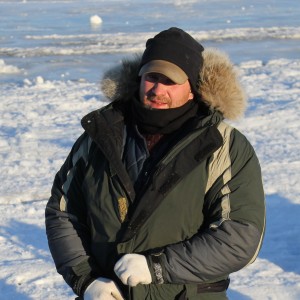 Doing a quick count, there’s a potential for fifteen mushers to hit the coast yet today.  Some may camp before making the coast and then move right on through to Shaktoolik.  Others will take advantage of resting here and enjoying some of the excellent Unalakleet hospitality.  Middy Johnson has been cooking up sour dough pancakes since yesterday afternoon shortly before Aaron Burmeister arrived.  The first fellow I saw with a stack of Middy’s special cakes was Race Marshal, Mark Nordman.  Between mouthfuls Mark said, “We’ve got quite a race this year.”

One of the guys on the slough right now is Nathan Schroeder.  Nathan earned his finisher’s buckle and Rookie of the Year honors last year in the race ruled by Mother Nature.  He bested fellow rookie Abbie West by five minutes to earn the rookie honors.

Schroeder drives from Minnesota to run Iditarod.  He’s 37 and the father of three.  Nathan races dogs in the winter and his wife, Carey, barrel races in the summer.  Growing up around horses and dogs, it seems there’s a good chance the Schroeder kids will become involved riding or mushing.  Schroeder who works as a millwright got interested in mushing after riding a sled behind a team of malamutes when he was just twelve.  From that moment on he began dreaming of doing The Last Great Race.  He races extensively in the lower 48 and has claimed numerous championships include John Beargrease crowns in 2010, 2013 and 2014.