Guardians of the Race: Iditarod vets of the first ten years 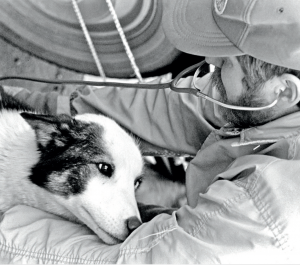 Excerpt from the book Iditarod: The First 10 Years, an anthology compiled by The Old Iditarod Gang.

For all of their skill, savvy, and dog sense, the early Iditarod mushers didn’t know what they were doing. Nobody did, because nobody had run a sled-dog race from Anchorage to Nome before. That’s not a criticism. That’s part of the definition of adventure. Had they known what covering 1,000 miles as fast as possible required of their dogs, they’d have known that one veterinarian wasn’t enough. That’s all the race had in 1973. Terry Adkins, on reluctant loan from his Air Force commander, flew the trail with Joe Redington and doctored dogs as a labor of love—a love sorely tested in the bitter cold of Rohn.

The next year Adkins ran the race and then Jack Morris took over as the lone vet. They tell their stories here, along with Phil Meyer, who roughed it for a long stretch at Iditarod in 1979, scrounging meals from what the mushers left behind, and honing the practice of trail care below zero.

Veterinary medicine is a science, but the Iditarod vets of the first ten years needed an element of art as well, because they shared the challenge of everyone else in the early years of the race—they had to make it up as they climbed a steep learning curve. Vets had to be as tough as mushers and trailbreakers, go without sleep, work in the cold, diagnose ailments, and sometimes practice diplomacy with mushers who weren’t used to be being told about how to better manage, feed, or water their teams. Morris provides a good example of that diplomacy in this section.

Vets had to learn and teach at the same time, and they had to be willing to be bearers of bad news, even dream breakers, to put the dogs first. Tough skin was essential, because they found themselves in the middle of controversies about dog deaths, forced hydration, and allegations of cruelty. But it’s a testament to the heart of the race that veterinarians kept coming to it a generation ago and keep coming to it; today the Iditarod has a vet force of more than fifty, and puts forty in the field. Had there been forty in 1973, vets would have outnumbered mushers. Redington and Adkins couldn’t have imagined a vet corps big enough for its current policy—every dog checked at every checkpoint.

Nobody cares for a dog team better than a good musher. But from Terry Adkins on, veterinarians have been guardians of the race, a driving force for improved dog care from more humane standards to padded harnesses, better nutrition to beds of straw.

Early in the 1980 race, Phil Meyer tended to a dog in Colonel Norman Vaughan’s team. With hands cold but true, Meyer closed a wound under one of the dog’s eyes, his skilled stitch and steady voice calming both dog and musher at twilight on the Yentna River. “Just your being here helps,” he told Vaughan. The best vets were as tough as mushers, and still know how to apply a tender touch.