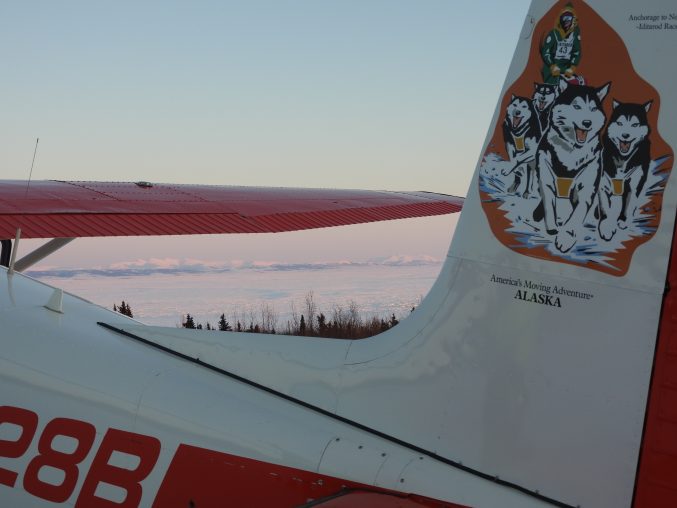 John Norris’s plane parked above the sea ice in Koyuk 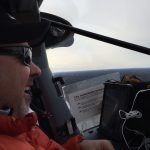 Forget Alaska-based aviation reality television shows––the Iditarod Air Force pilots are the real deal. With twenty-eight pilots comprising 300,000-plus cumulative flight hours––over 200,000 of which are in Alaska––there is no better group of pilots to call upon to grapple the logistical soup that is Iditarod. These volunteer pilots fly straw bales, drop bags, checkpoint volunteers, the Teacher on the Trail, the Insider crew, dropped dogs, checkpoint food, enough Tang to fill a space shuttle, and any other details that need to be addressed as the race is in motion. The required organization is mind-boggling, but with the help of a handful of volunteer flight coordinators, these pilots tackle their job with confidence and pride.

Multiple times on the trail I heard former competitive mushers say, “We never thought about all this when we were racing. We just came into the checkpoints and had no clue all this was going on in the background.” The details they weren’t noticing, were the infinite pieces that must come together to make the race run smoothly.

“It’s like fighting a war,” volunteer pilot, Wes Erb, says. “It’s a huge logistical effort. Your enemy is time and pressure. You have all these resources and they need to be there at a certain time. I think the backstory behind the race is almost as interesting, if not as interesting, as the race itself.”

These pilots volunteer not just their time, but also their single-engine airplanes to the race. “It’s rare in aviation to get a large group of people together that aren’t doing it for money,” Cessna 180 pilot Matt Tomter says. “But we get out here and we’re all on the same beat of music.” 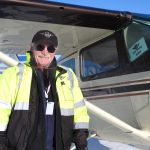 Jerry Wortley beside his Cessna 206

Jerry Wortley, a tenth year Iditarod Air Force (IAF) pilot takes his role one step further. An aviation insurance broker in Idaho, Jerry typically flies his Cessna 180 up from Idaho in November or December each year to get it ready for Iditarod. This year, he flew his 206 which he’ll be flying back to the Lower 48 in April or May. When asked about the exorbitant cost he incurs for this he says, casually, “It’s a lot of fun. It’s like a vacation. When you go on vacation you’re going to spend money.”

But of course, there’s more to it than that. For the pilots, the camaraderie, the love of the logistical challenge, and the personal reward keep them coming back. “You become a part of it,” Jerry says.

When Chief Pilot John Norris started with IAF in 1989, it was far more informal. Iditarod needed some assistance and they took whatever help they could get. Since then, it’s become a far more sophisticated operation. “The longer you work with it the more you understand those logistical pieces,” John says. “It’s a challenge but you know what needs to happen. You understand things change and you just go with it.” 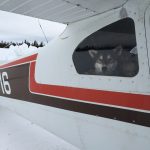 A dropped dog awaits an IAF flight back to Anchorage

John’s father was a pilot in the Air Force, and as a result John’s been flying as long as he can remember. At 13, he joined the Civil Air Patrol, and at 17 he earned his private pilot certificate. Today, he is the president of U-Haul of Alaska, and uses his Cessna 180 for business.

Even 28 years into this race, John is still as enamored as he was in year one. “It’s habit-forming. I look forward to it every year.” Every trip he notices something new, whether it’s a herd of six thousand caribou or an old gold dredge in a place that otherwise seems untouched. He simply loves aviation, “When you do something you enjoy you continue to improve your skills and your knowledge. There’s no limit,” he states.

The other pilots agree. “We all learn from each other,” Jerry says. “We never stop learning.”

Some pilots fly for business, others fly for the airlines; some are business owners and one is a heart surgeon. The skill and life experience comprised in this group can’t be understated, and neither can their passion. As a result, the IAF sees little turnover. 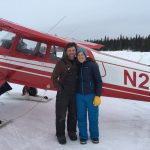 Wes Erb pauses for a photo with the author in Kaltag

“If someone likes it they do it for a lifetime,” Wes notes. Wes flew the trail as a tourist until 2003. During that time he saw IAF pilots flying down the trail with “other people putting fuel in their tanks, staying in warm beds, not having to stay in cold tents or pay outrageous fuel prices.” After that realization, it was a natural move to join this elite group of pilots. Wes is a FedEx pilot by day but he admits the airlines can be a little dry with autopilot on for 99% of the flight. Flying for Iditarod gives him a chance to get out of high altitude jets, and fly his comparatively low and slow Cessna 180 with purpose. “I really want to thank the 75 mushers who get together every year and support my flying hours program,” he laughs. But for a guy who takes his vacation time to fly for Iditarod, that statement holds an element of truth. “Other people go to the beach; I go to Shaktoolik,” he smiles.

Small plane aviation has long been the connective tissue that binds together Alaskan life off the road system––and the IAF is an extension of that. Hard-working, safe, and immensely talented, the Iditarod couldn’t exist if it wasn’t for these dedicated pilots. They are the the lifeblood of the race who rise to this fluidic challenge with unmatched skill and professionalism. And for that, the mushers, dogs, Insider team, and fans are endlessly grateful.

*Without the help of the IAF, the Insider couldn’t bring videos like this into your home:*