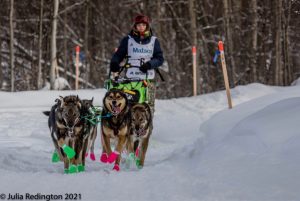 Have you ever wondered about opportunities for younger mushers? Let’s talk about the Jr. Iditarod!

The Jr. Iditarod is for mushers 14 – 17 years old and stretches 150 miles. Typically, the race starts in Knik and winds its way up through the Alaskan wilderness, where mushers stop in Yentna for a 10 hour layover. During their rest, mushers not only take care of their team but they also make friendships around the campfire which can last a lifetime. Once their layover is complete, mushers head back out and make their way to Willow for the finish.

Don’t let their youth fool you, though! There teens are fierce and put their heart into what they do. In 2008, Cain Carter and Jessica Klejka crossed the finish line just two seconds apart! Now that is close!

Nearly 330 mushers have run Jr. Iditarod since its start in 1978. Of those, about 1 in 5 have gone on to run Iditarod. No one who has won Jr. Iditarod has ever gone on to win Iditarod, but who knows… maybe this will be the year! There have been seven Jr. Iditarod winners who have claimed the trophy twice, but Tim Osmar is the only musher to have ever won it three times.

Jr. Iditarod encourages mushers to grow themselves not only in the sport, but also encourages personal growth in the rest of their life. They do not give out monetary prizes but instead scholarships are presented. One junior musher, Kevin Harper, earned over $16,500 in scholarships over several races. Think of the opportunities that could present!

Want to know more about Jr. Iditarod or interested in ways you can help the organization? Contact us at junior.iditarod@gmail.com or check out our website at JrIditarod.com.