2pm Nome—mushers into Nome, End of the race 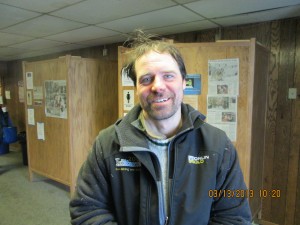 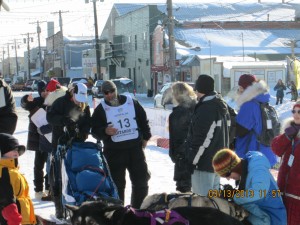 2011 champ John Baker at the finish, greeted by family and friends

2PM NOME—-Mushers into Nome, End of the Race

Just checked the Iditarod checkpoint times and see 21 mushers already in Nome (mile 936) .  To the rear of the pack, Cyndy Abbott (mile 611) and Bob Chlupach (634) are near Kaltag.  While the air went out of the competitive side of the Iditarod when Mitch Seavey and Aliy Zirkle finished late last night in Nome, other competitors have more than a third of the distance left.  Their race is about accomplishment  and we can wish good travel.

You can catch trail stories and recollections at the Insider of every finisher in their own word.  Cameras at the finish line and our camera guys recording interviews document each and every finisher.

Several close finishes in the top ten deserve mentioning.  Of course you can view the finish chute interviews.   I saw Cym Smyth and he described a great finish line battle between he and Paul Gebhardt.

About 20 miles out of town, just about the point where your tracker indicates Safety , Cym saw Iditarod photographer Jeff Schultz and asked if Paul Gebhardt knew he was behind him.  Schultz confessed ignorance.  Thinking he was about 25 minutes behind, he decided to put on the afterburners and catch Paul.

As Cym and team closed on Gebhardt, the cheering crowds put his leaders into overgear.  “Neither leader had been to Nome, but they knew crowds probably meant checkpoint and rest and a meal.  The two passed back and forth,  with Cym eventually into the chute finish in front.

Worth noting, if you have the time, is the close finish between Joar Ulsom (a remarkeable 7th for first time Iditarod rookie)  and Jake Berkowitz (8th and another top ten finish).  Joar and Jake tagged each other for 77 miles, then finally resolved the race on Main Stree with Joar in advantage by 16 seconds.

Every year I look for a theme of the race and this year I thought it was a great working of the minds.  The details aren’t clear, but the philosophy of the racers is focused.  Stay patient, stay within the parameters of  your plan, and you might have things go your way and win.  For example,  Aaron Burmeister was absolutely consistent  about resting his dogs, feeding every two hours, and estimating the length of his runs.  He went so far as to declare that he would not let his dogs travel over 9.2 miles an hour, his red line for performance and was absolutely intriguing in his explanations of feeding—all his rations had accurate calorie content and fat/protein percentages.  His plan didn’t get him to the finish first, but his philosophy is a great game plan of how you can do it and finish to the top.

Aliy Zirkle, and the other lead mushers, including Martin Buser  and his very unconventional surge to the front in the first day of racing,  created a race tension that kept me speculating.  King, Aaron Burmeister, the always incomparable 4x champ Lance Mackey,  last year’s champ Dallas Seavey, Nicolas Petit running the race of his career, the Norwegian Barbarian Joar Ulsom who never met a hill he didn’t run,  cagey Sonny Lindner, Pete Kaiser, Ray Redington, and others continued to attack and frustrate the competition.  Without them and their experimental strategies, the chaos of the race would not have been created.  My favorite moment of the race was the moment in Eagle Island when the pack caught Martin Buser,  then reorganized into calculated surges to the front.  Eventually, out of a tangle of strategies, Mitch Seavey emerged.

I thought Mitch Seavey was just brilliant.  Not only was his plan consistent, leaving his dogs in a rhythm of resting, feeding, and running, he also did some great training.  When he needed , his dogs all leaning into harness were prepared to bump up a long trot into a nine mile an hour freight train rolling into Nome.  His lead dog Tanner, in my opinion, deserves the movies.  Running in single lead in the front, this big male dominated the trail, and had some inner spirit that made him push the pace.  I have no more idea why this dog wanted to hammer the trail than why geese want to fly from Utah to Unalakleet, Alaska, but this animal had a very unusual inner drive.  In partner ship with Mitch and Tanner, the rest of the team bought into the plan.