An Overview for the serious fan

Finally, the race start—An Overview for the serious fan

After a winter’s training and preparation, a week spent satisfying veterinary and race rule requirements, and the preliminary formalities of the musher meeting and banquet, we are now a day from the actual start of competition.  So, here’s a brief summary of what to expect:

Just as the name suggests, the Saturday start on 4th Avenue downtown Anchorage is a vestige from the early Iditarod years when the race actually started in Anchorage.  Over time, development in the Anchorage area and trail access has caused organizers to move the real start of the race to Willow on Sunday.  It takes an hour and a half to two hours to drive north from Anchorage to Willow on the Parks Highway.

Nevertheless, the ceremonial start in Anchorage receives considerable media attention.  In essentials, the city carpets downtown streets of Anchorage with snow (an all night effort of dump trucks and loaders) so that mushers can wind thru the streets of Anchorage to a Bureau of Land Management Campbell tract facility.  The eleven mile trail is bounded by thousands of spectators.

The Ceremonial Start is mandatory, but the time is not recorded.  From a competitive point of view, the ceremonial start is meaningless for Mushers, but it is necessary to avoid the screw up.  A major screw up would be to careen off the trail on a corner and break your leg, or worse, accidentally injure one of your dogs.  So, as a musher, you have to be careful.

Secondarily, it’s a good time for mushers to casually enjoy introducing the team to the public.  As the reader recalls, enthusiastic fans may actually bid on a ride in the sled for the eleven mile trail.  This is a big fundraiser for Iditarod, with some “rides” with selected mushers going for thousands on an internet auction.

My opinion: the ceremonial start is meaningless, but must be considered in overall strategy.  The mushers are under the overarching supervision of the race marshal, so all the rules of conduct and dog care apply from the 10Am start to the finish in Nome.

NOTE:   Most competitive mushers are “tapering” their dogs from a rigorous training schedule the week before race time.  Generally speaking, the last time the dogs were driven is Wednesday—and only for a thirty or forty mile run.  Most probably, most dog teams are now gaining weight, which is not a bad thing before a thousand mile marathon.

Therefore, the dogs have been basically sitting Thursday and Friday.   The Ceremonial Start on Saturday, for a trained Iditarod team, is a walk in the park, barely an effort,  and just a nice stretch.

What is normal training?  Two weeks ago, one top contender told me he was training out 92 miles, then resting four or five hours, and then returning 92 miles to the home kennel.  In this training run, the dogs were fed every two hours, thereby duplicating a race strategy to supply a balance of calories versus effort.

The RE-Start on Sunday

Sunday, March 3, is the real start.  The Re-start, as it is called, begins at 2PM and the race clock officially starts ticking.  Mushers will have their game face on, fully geared up and ready to compete.  Even in the bright afternoon sunlight, many mushers will have already situated their headlamp, anticipating that their first run will take them into darkness.

Generally, the top contenders will travel for five to seven hours (depends on training and theory) before stopping for a rest.  If history is an indicator, the top racers will use Run 1 to get close to Skwetna. (check it out on the Insider Maps.) about midnight Sunday.

A variety of options are possible, but Run 2 will probably take the mushers near Finger Lake, located on the south shoulder of the Alaska Range, early morning on Monday at 7AM.

Run 3, generally speaking (many variations are possible for camp site resting) will bring the front pack to a point close to the trail summit over the Alaska Range, about noon on Monday.  Run 4 will take the pack over the Alaska Range, where front runners could appear on the north side of the mountains at Rohn checkpoint sometime  around 10PM on MOnday.

This is a blistering pace over rough terrain, punctuated by technical difficulties at the Happy Steps (wild descent) and Dalzell Gorge (see my last article for photos of unpredictable ice and terrain in the canyon) not to be attempted by the unprepared.  The distance is 188 miles ascending and descending a major mountain range.

Rohn to the immense flats of the Yukon Drainage

By Monday evening we should begin to see the front pack emerging.   As I’ll try to point out, however, the lead is a deceptive concept, for some mushers are planning to go to about mile 330 (only a third of the way to Nome) at Takotna for the mandatory 24 hour break, while others may contemplate going further to Iditarod checkpoint (about mile 432).

Some mushers have told me they have plans to travel as far as Anvik (mile 522, basically half way to Nome) before taking a 24 hour break.  One of them, Lynwood Fiedler, did this in 2001 and was second behind Doug Swingley, who had gone all the way to Iditarod.

In summary, this represents a big difference in race strategy between the “Takotna” mushers and the “Iditarod or Anvik” mushers because the dogs must be paced differently.

This does, however, make for very interesting considerations for the fan.  While some fans, including myself in that camp, like the long range “Iditarod checkpoint” thinkers, many prefer the fast and furious pace to Takotna.

The reason some mushers are reluctant to travel onto Iditarod for a mandatory break is largely their evaluation of risk.  The 100 mile trail
from Takotna to Iditarod is known to be very remote and seldom travelled.  Therefore, a front running team may find themselves on a soft and treacherously slow trail, breaking trail for a following pack who will find the front runner’s daredevil run very foolish.  It could take the temporary front runner out of the race.  This is the risk.

The benefit is conversely huge also.  If a front runner makes it to Iditarod, for example, and competitors remain a hundred miles behind in Takotna, the front runner could have a significant advantage.  By advancing from Iditarod with a well rested team, the musher could have the speed and strength advantage to Nome.

This is the stuff of great debate, a theme we can follow over the next several days.

I should add a few of my impressions after having now talked to a number of mushers.  The science of counting calories has reached new levels of sophistication this year.  Mushers have known for a long time that one of the keys to success in long distance racing is to supply sufficient calories to the biologic machines.  In the past, this may have been regarded as an art.  One of the best practitioners may have been 4X champ Lance Mackey, who seemed to sense what his dogs needed without quantifying it with numbers.

Now, I notice mushers talk specifically about numbers of calories and often they need to supply these snacks.  So, the general thinking is that a continuous and consistent supply of calories—never allowing the balance to go negative—is critical to success.  Even more, mushers formulate and recognize rations with varying percentages of fat and protein, giving them even more versatility in colder weather and more demanding trail conditions.

In my discussions with the veterinary techs who examined teams for this years race, it seemed that dogs were noticeably thick and dense, probably a result of being able to train longer and at the same time maintain body weight. 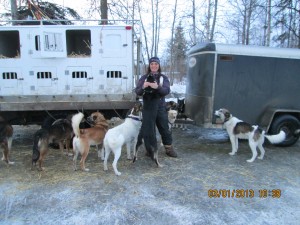 Taking a pre-breakfast stroll through the parking lot this morning, I noted Michelle Phillips, 16th place in Iditarod 2012, ladling a meal of meat, commercial kibble, and water to her team of huskies.  Her goal is to bump up in the standings, planning for a top ten finish.  Her husband, Ed, helps train the dogs and in fact took a team on this year’s Yukon Quest, a long distance race from Whitehorse, Canada to Fairbanks, Alaska.

Eleven of the finishers from Ed’s team will be in Michelle’s 16 dog Iditarod string. 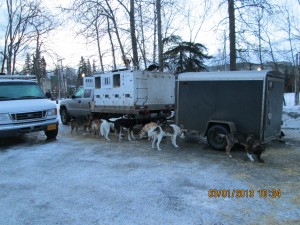 Michelle’s dogs arrayed around the truck and trailer. On the first day, as a top team, they will travel 100 miles or more