Noon in Anvik with the Ultimate Optimist

Lance is hanging at the checkpoint so I had a chance to talk with him.  This guy is one of the world’s leading optimists, not only in how he approaches his own life after nearly biting it with cancer, but how he deals with his team of sled dogs.  He described how he assembled this disparate group of dogs after his disatrous scratch in the 2013 Yukon Questl;   “Some of them havent even camped with me until the Iditarod.”

He described to me how he has stopped his dogs, reassured them, even at times taking a nap next to his resting team.  Gradually he has begun to mold the team, on the run, into racers.  Lance has been posting fastest times consistently on the trail, and although he is seven hours behind Martin, he made a reference, “I was in exactly this same position when Paul Gehbardt and I were, in this exact same spot, behind.  We said we were going to catch them (referring to MaRTIN ANd Jeff in 2007) .  I remember lance and Paul  telling me they were going to catch them, and they were going to do it bit by bit.  Eventually, on the bering sea coast, lance finally took control of the lead and won his first iditarod.

So, how do you do it?  Long range thinking because its necessary to visualize the importance of incremental improvements.  It works both ways, and Martin is thinking the same thing.  If lance , for example, can continue fast trail times and post a time to Grayling that is 20 minutes faster, that actually means he gained 35 minutes, more or less, because you have to count in the necessary rest time to sustain a running effort.

Paying attention to detail and never losing focus, it is conceivable that Lance, or any other front runner like Zirkle (just heard a trail report from a snowmachiner that she is smoking on the trail with her loping team), Burmeister, and Jake Berkowitz could do the same thing.  Every minute is a penny and they will add up.

Incidentally, I asked Lance how his hands were doing (nerve damage from radiation treatments) and said they were doing great, in part because of warm weather, and in part because he has been able to keep gloves warm and dry with his innovative cooker.

nicolas Petit has photo of malemute on his sled

Nicolas Petit was sleeping so I had to rely on a story from Suzanna Caldwel, who is covering the race for the alaska Dispatch.  I asked “What’s with the photo of the malemeute on the side of Nicolas’ sled.” Nicolas is a very lean tall guy that has an obvious empathy with his team  She knew the whole story and explained that a friend in Hawaii had a a malemute that he was sure would want to see the Iditarod trail.  Nicolas took this very seriously, blew up a photo, and is taking the Hawaiian malemute on the trail to Nome. 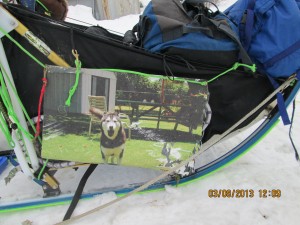 malemute in hawaii whose owner (a friend of Nicolas Petit) believes he would want to be on the iditarod trail sent photo to Nicolas. Actually, to me, looks like the malemute is in a good situation.

THEN. as it turns out, NicolasPetit just roused from his nap.  I got even more of the straight facts from the man at the middle of this drama.  “Well, actually, the malemute belongs to a friend of my friend in Hawaii and I am giving the dog the ride of its life. The rain is kind of destroying the photo, so I am kind of spreading the photo all across Alaska.”  The he looks at me and shrugs, “Kind of like spreading its ashes.  I kind of feel bad if its polluting the environment.”  And now that he has immersed his mind totally into the conversation, I ask him how he feels about the dog in the photo.  Nicolas looks at me, going through the entire mental process in which humans access the value or the virtue of ideas or concepts, “What am I going to do, say NO?” referring to the friend of the friend.   As an afterthought, “I dont know if he would even pass an EKG.  He would be an easy keeper, I hope he’s not a quitter.”

Check out fast time of Jake Berkowitz into Grayling with 16 dogs.  We are waiting for Martin’s time into Grayling.  Could be a game changer.