The GREAT ALONE, a film about Lance Mackey by Greg Kohs

Two years ago Greg and me often met along the Iditarod Trail, Greg filming, me taking pictures. Both of us were hunting for internet access. Greg was on a mission to make a documentary about legendary 4 time Iditarod Champion Lance Mackey. At first he called it simply ” Lance “! The documentary was a work in progress, out of which the new name grew: THE GREAT ALONE. It is a perfect title. 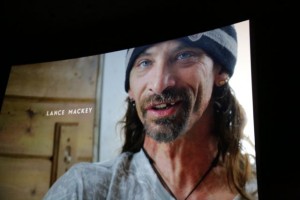 Iditarod 2013, the year much of the footage was taken, did not quite go as well as Lance’s previous Iditarod’s had gone.  In essence that was a perfect story line for Lance’s life, which also had quite a few up and downs and many unexpected turns. The film parallels Iditarod 2013 with Lance’s life story from young age, not being shy of showing the not so pretty sides, and culminating in his ultimate 4 Iditarod Championships. A story of perseverance. So was the Iditarod 2013 for Lance. Many other mushers would have pulled out of the race, disappointed. Not Lance. No way. He does not give up, neither did he give up in his life when things did not go so well. He sees the bright side. 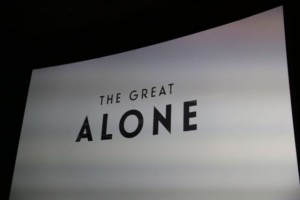 Growing up in Alaska is not easy. Specially in a family who’s life has gone to the dogs. A telling quote by Dick Mackey summed it up well: “ I knew the ins and outs of my dogs better than I knew my children “. Lance said : “ I was 18 years old before I ever went fishing or hunting and that living in Alaska “. The Mackey family broke apart. Lance felt alone. Greatly alone and it took a while for him to find his own path. 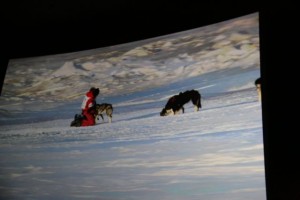 Overcoming cancer, the dogs saved his life, gave his life a new meaning and ultimately pulled the Mackey Family back together. Lance’s quote of: “ You do not let go ( of the sled ) and there will be bumps and bruises along the way “, could be said for his daily life too. Never let go. Follow that goal. Lance found out who his true friends were, in racing and real life, like during the 2007 Iditarod, when he needed a new sled after breaking a runner and got turned down by mushers who he had thought were friends.

Lance’s goal was to be like his dad, who never gave him much attention when Lance was young. Finally, in 2007 Lance got his dad’s attention, winning Iditarod, after just having won the 1000 Mile Yukon Quest. Nobody had accomplished that before him. Under the burled Arch and the finish line, the Mackey family pulled back together. Lance’s mission was accomplished. It was great to see Kathy, Dick, Lance and Jason tonight at the film screening united, proudly being a family, strongly tied to the beginning of Iditarod Days. 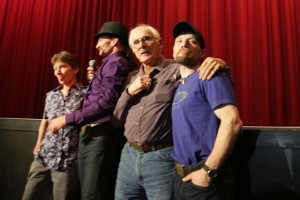 The Mackey’s united on stage

Greg Kohs film is powerfully honest. Its combines Alaska’s harshness with great emotions. There were many teary eyes in the audience, and some from laughing at the countless punch lines too. Lance’s candor is well portrayed throughout the film.

It is well worth watching. I felt privileged to be invited to the first showing. A great beginning of this years of Iditarod for me. The Great Alone is chocked full of powerful aerial images of the Iditarod Trail, its vastness, the beauty, its unforgiving ruggedness. I can only recommend anybody to follow along and keep updated on a chance the view “ THE GREAT ALONE “ Here a link : https://www.facebook.com/greatalone.