Good morning from Unalakleet. The notorious east wind has picked up. It is by no means as strong as it could be, but it is not as calm as yesterday. There is a winter storm warming in the forecast. 2 back to back storms, one later today, and another tomorrow night. Talking to Robert Buntzen he is worried about that. Although he still drives 14 dogs, he says his leaders are not the strongest. Plus he is driving a few leased dogs. With leased dogs, there is less of a bond between musher and dog. Robert is wise to play it conservative. When asking him what motivates him to come back: ” Oh just one last run “. Yes I have heard that before. This is truly a fascinating event, which keeps luring us all back. 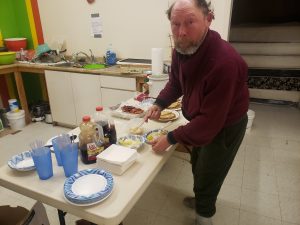 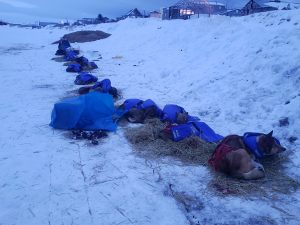 Another Musher arriving with 14 dogs, a very happy bunch, is Martin Buser. He skillfully guided his team through the other parked teams here in the Checkpoint and parked next to the snowbank. His young team is maturing into racing veterans over the last 750 miles. They are looking pretty darn solid. 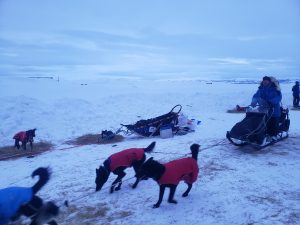 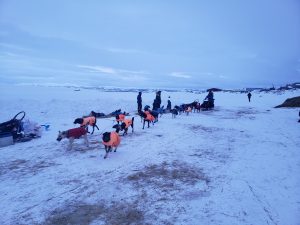 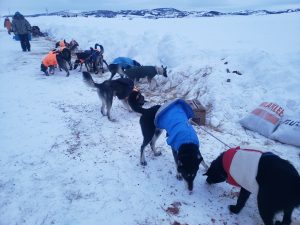 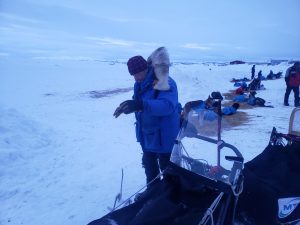 Laura Neese just asked Martin: ” how was your run ?” Excellent Martin replied. ” Yes I finally had a good run too” Laura replied. Big part of that, is that yesterday with the warm temperatures, the snow settled. Then glazed overnight and trails became fast. Runtimes have picked up a lot. Martin chowing down on Pancakes and Bacon says he will get at least 3 hours of sleep here. That is the benefit of running in the back of the pack. 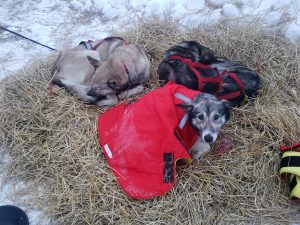 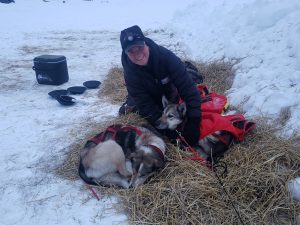 Outside Kristi and Anna Berington are faced with a difficult decision. Anna is running low on dogs, and really wondering if she should continue or not. Personally I always say, if you are asking yourself those questions, there is nothing wrong with deciding to the safe side. No harm done, and at the end of the day, it is just a dog race,

One thing about being on “this side ” of the game is seeing what certain ” moves ” early in the race can do to a dog team. It is a very fine line, of when to let a strong team loose, and how long to still hold it back. Looking at Thomas Waerner and Mitch Seavey, the both masterfully conserved their teams in the first half of the race. They kept within striking distance, without being up front ( likely Mitch wishes he would, or could, have stayed a little closer ). Thomas resting for his 24 in Takotna and then taking his 8 in Ruby, the first available checkpoint for that, kept his speed up. His team started peaking along the Yukon River, which saw some pretty difficult conditions this year. Running nonstop from Kaltag to Unalakleet then gave him a pretty big lead.

For some of the earlier front runners, they are a little more in ” maintenance mode ” now, than actual racing mode and catching teams from behind. Another team looking phenomenal is that of Paige Drobny. They have great attitude, did hardly loose any weight and are peaking along the coast.