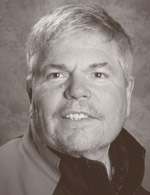 
There are no records for this musher during the 1982 race.

In 1974, Ron was living in Galena, Alaska and had the opportunity to watch the Iditarod Sled Dog Race come through the village. He says, “By the end of the month I had built a sled, rounded up a few stray dogs and had my first team. Sled dogs have been a part of my life ever since.” During the 1970’s and ‘80’s he worked as a Physician’s Assistant in rural Alaska and was involved with training community health aides in the villages. He was the first P.A. in Unalakleet and lived there for three years. After one year of working on the North Slope, he moved to Two Rivers and raced in the 1980, ’82 and ’84 Iditarods and competed in the Cold Foot race, the Knik 200 and the Two Rivers races in the “early years.” In 1988, he left Alaska to go to medical school at the University of Washington in Seattle, and completed a Family Practice residency at the University of Wisconsin. They moved to Tomahawk in 1995. Cortte was awarded the Family Practice physician of the Year award by the Wisconsin Academy of Family physicians in 2003. The Cortte’s 50-dog kennel is from their own breeding, which began from Wright-Saunderson bloodlines. For the past three years, he has been mentoring young mushers and is entering rookie Chad Schouweiler in this year’s Iditarod. Cortte, 52, and his wife, Jane, have four children, Dustin 18, Jake 15, George 12 and Robyn 10. He says, “Coming back to the Iditarod is a dream come true after 22 years away and it will be a very special experience.