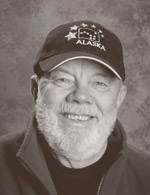 
There are no records for this musher during the 1983 race.