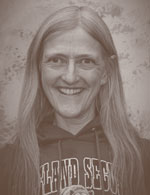 Francine Bennis, 52, established the Alaska Snowdancers Dogsled Tours & Freighting, in Chugiak, Alaska, in 2002 to provide opportunities for dogsled tours. The company moved its base of operations to Trapper Creek, Alaska, in 2006 to take advantage of better snow conditions. Francine grew up (the first time, she says) in Niagara Falls, New York, and came to Alaska on a whim when she was 18. She'd always loved animals and remote wild places. The mountains, glaciers, clean air, and dog teams of Alaska captivated her completely. She knew Alaska and the dogs were the life for her. She still loves and savors every minute of it after almost 30 years. While earning a BS in Biology/Geology at the University of Alaska, Fairbanks, Francine embarked on a career of commercial fishing that spanned twenty years. Commercial fishing took her to the waters of the Bering Sea and Gulf of Alaska for salmon, herring, cod, halibut, and crab. In the early 1990s, she began working in fisheries conservation promoting healthy Alaskan oceans. Francine started running dogs in 1978 when a friend went 'Outside' (outside Alaska) for the winter and left her his four leaderless dogs to run. She ran the dogs for fun and by the next year she had a few of her own dogs, In the summer of 1980 while looking for a Bristol Bay salmon fishing job, she had the good fortune to meet Joe Redington, Sr. Joe encouraged her to 'go Iditarod' and in 1984, after a fantastic salmon season and with a lot of help from Joe, she did just that. She ran the 200 mile Knik to Skwentna and back race (called Don's Iditarod 200 back then, now called the Knik 200) to qualify for the Iditarod. Afterwards, she continued to run dogs for fun. Joe Sr. passed on in 1999. Francine got one of the last puppies he named Raven, a descendent of Joe's famous Roamer and Feets. Raven fathered his first litter of nine pups, born June 24, 2005, on the sixth anniversary of Joe's passing. They share the company of about 30 other dogs and pups. For two summers, Francine worked on glaciers giving dogsled rides to tourists. Recently she began developing summer dogsled ride operations in the Talkeetna/Trapper Creek area. She has her private pilot's license and loves to fly every chance she gets. Flying, wilderness and dogs are her quite compatible passions. "I just love being in the wilderness of the North, whenever and however I can-running the dogs, hiking, boating , flying, picking berries and other wild edibles. I also love gardening, reading, photography, music, playing a good game of cribbage, and of course, living with the dogs."