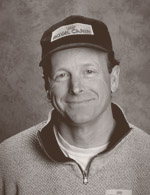 Halfway — Sponsored by GCI
Rookie of the Year