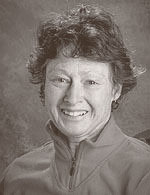 Sandy McKee, 58, was born in Ohio. In 1997, she received a degree from University of California at Long Beach in Microbiology/Chemistry. Before moving to Alaska, she and Bill lived in Estes Park, Colorado where they spent their leisure hours climbing rocks in Rocky Mountain National Park and where she worked as a medical technologist. While living in Colorado, she met a woman from Fairbanks and told her husband, “Vivian lives in Fairbanks and mushes dogs and that’s what I want to do.” He told me I was crazy for wanting to move from our home in the Rockies. “Twelve years later he had completed his first Iditarod and two years after that I made my first attempt.” They moved to Alaska in 1992 and Sandy went to work at the Fairbanks hospital as a medical technologist. She began mushing in 1993 and became interested in running the Iditarod after she and Bill watched the re-start in Wasilla and then in Willow and then flew to Nome for the finish. At that point, they realized that some day they’d be doing the race. They started their kennel with a couple of dogs from Rick Mackey, a couple from Will Forsberg and one from Jeff King. They have borrowed some dogs from Chris Knott for this year and Sandy is confident that after two scratches, she will finish this year.