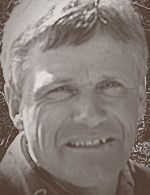 Michael Salvisberg, 48, was born in Zurich, SWITZERLAND. He was a cheese maker in the Swiss Alps and moved to North of North America in 1990 to pursue a dog mushing career. (“Is it a career,” he asks.) He received a diploma in Environmental Sciences from Aurora College in the Northwest Territory. He began mushing in 1992 and began to look toward the Iditarod in 2000 when he realized that he had “one incredible team of dogs.” Before coming to his first Iditarod in 2005, he ran many mid distance races in Canada. Michael says, “After a fantastic run in 2005, we are returning to Iditarod to attempt to improving our performance. When I started mushing in 1992, Iditarod seemed an impossible goal to reach! It is amazing what patience, dedication, hard work and perseverance can do. My team and I continue to work toward becoming fully recognized as a professional full time year round team. Iditarod is a unique and completely incredible experience and we are proud to be part of it.” Michael has one son, Dylan, 13. He lists his hobbies as reading, travel, languages and woodwork.