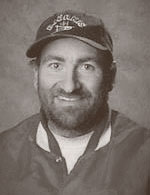 Frank Sihler, 41, was born in Germany and came to Alaska in 2001 “to escape from overcrowded places with too many rules.” He started with one Siberian Husky, skijoring through the European Alps in 1987. A few years later, he opened the first “mushing school” in Germany, turning his hobby into a profession. Frank participated in the Alpirod in 1990 and 1991 and had already started dreaming about the Iditarod way back then. He raced many sprint races in all classes, from local races over European Championships to the Open North American Championships in 1995. From 1996 until 2001, he owned and operated a sled dog tourist business in Northern Finland, about 100 miles north of the polar circle. Frank says "I'm back in the Iditarod after a two year break because it is the superbowl of mushing! This year I will take it easy. I have a lot of young puppies in my team. This will be my first year running with my own breeding lines. He is married to Claudia, a former Iditarod veterinarian. He enjoys boating and building houses.