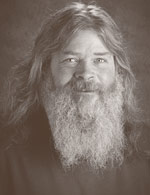 "Rodeo" Vincent, 49, was born in Kansas in 1957. When Roger moved to Montana in 1996, he wanted to learn how to run dogs. He went to work for a touring kennel for three years and then he bought the business. He clients kept asking him if he was going to “do the Iditarod.” He thought he was too big until he got a chance to see and feel the power of Doug Swingley’s team at a fun race. That is when he happened! He got race dogs and found out that camping with them was “my thing.” Now he and his team would like to make the trip to Nome. He has participated in the Ashton Dog Derby, Mancos Much, Seely Lake 200 and Race to the Sky. Roger has been in the concrete construction business for 30 years.