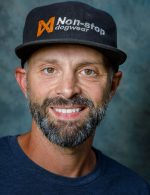 Jesse Salyer, 41, was born in Santa Barbara, California and spent his early years on a farm. He grew up in Houston, Texas and, after high school, followed his father’s footsteps into the oil industry. He lived and worked around world before accepting a position in Anchorage in 2009. His first winter in Alaska, he became an Iditarod volunteer, helping at the race start and caring for the returned dogs. After a decade of working a corporate job, he became anxious for a new adventure and moved into an off grid cabin in Willow, Alaska. He got to know several Iditarod mushers while helping the local sled dog kennels impacted by the Sockeye wildfire in 2015. Jesse has been working with Iditarod champion, Dallas Seavey, for four years and is the kennel manager for the Dallas Seavey Racing Kennel and AK Sled Dog Tours in Talkeetna, Alaska. His hobbies include running, skijoring and bikejoring.